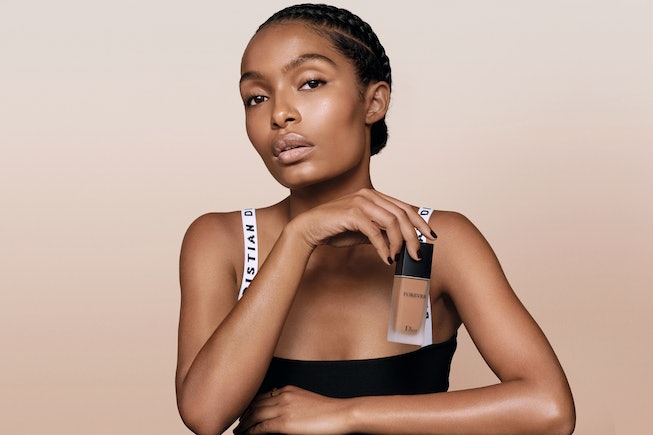 If it wasn’t already obvious that Yara Shahidi is a beauty icon, joining Dior as a global ambassador for fashion and beauty should has brought has certainly brought it home. It was first announced that the Black-ish and Grown-ish star would be adding Dior to her resume in July of last year (alongside BLACKPINK’s Jisoo and Anya Taylor-Joy), which was followed by her stunning Dior 2021 Met Gala look and (more recently) her off-the-shoulder gown courtesy of Dior at the 2021 Emmy Awards in September. Now, Yara’s first beauty campaign with the brand has been released, joining the Forever sisterhood movement as the new face alongside Natalie Portman, and she looks as glowing and gorgeous as ever.

Dior first released Dior Forever, their first high-coverage foundation with fusional finesse, in 2007 and millions of bottles have already been bought online. This year, The Forever saga hits a turning point to reflect the “new generation”, with longer wear and a cleaner formula (and double the concentration of floral extracts). “Today, we are reinventing our iconic Forever foundation with a new formula at the heart of which skincare and florality play an essential role, without compromising its original qualities. On the contrary, this new generation also provides even better performance,” says Peter Philips, Creative and Image Director for Dior Makeup, about the updated formula.

The new Dior Forever formula is resistant to heat and humidity, staying in place for 24 hours. It also comes in 42 shades available in two finishes: no-transfer matte or hydrating glow, available on the Dior website. In Dior’s clinical tests (over a one-month period), users saw an increase in 14% radiance and a 15% less tired complexion. “A new generation to break the boundaries of performance and formulation is coming. Rediscover the iconic longwear skincare foundation, @PeterPhilipsmakeup’s latest breakthrough innovation, shortly,” the brand wrote in an Instagram post.

The campaign centers around the idea of sisterhood in the Forever community, which is growing every day. Natalie Portman had been the loyal face of Forever since its launch, passing the Dior-shaped baton to the Gen Z icon Yara. And with a focus on achieving glowy second skin, we couldn’t think of a better new ambassador for the product than the 21-year-old actress, producer, and Harvard student.