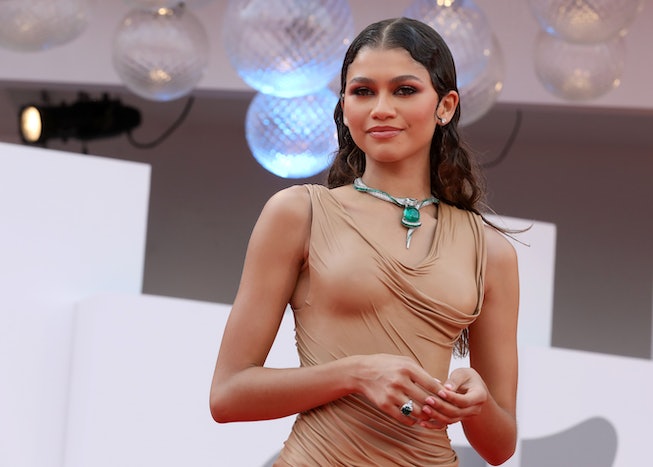 Zendaya is officially the CEO of turning up to every event with a new hairstyle. She’s worn a mullet with bangs at the 2016 Grammys, auburn waves at the 2019 Emmys, and past-the-waist braids more times than we can count, among a plethora of other styles over the years. This weekend, the actress debuted a new hairstyle at the Dune photocall at the London Film Festival. She arrived to the event sporting long, 1970s-style shaggy bangs with loose curls. It’s safe to say we’re obsessed.

The new fringe is reminding us of the bangs she had for HBO’s Euphoria Premiere in 2019. Both looks were long, face-framing, and wispy. However, this time the rest of her hairstyle also channeled the Jane Birkin aesthetic. Her hair was a soft, chestnut brown and the bangs were blunter, with less graduated layering around the face. This isn’t the first time she’s worn bangs during the Dune press tour. She also had another bang moment with short curly fringe at the Venice Film Festival. She loves to change up her hair and we love to watch how the looks come together. Both of these recent hair looks were the creation of stylist Antoinette.

At the post-screening cocktail reception (where she hung out with another hair icon, Jason Momoa), Zendaya split her new fringe into a middle part and showed off the versatility of the long fringe. The loose hairstyle paired with an oversized white button combined to make her look effortlessly cool.

Zendaya recently made waves (pardon the pun) at the Dune Red Carpet for the Venice International Film Festival in September, with a perfectly laid down wet-look hair in a look that broke the internet. Time after time, the star shows she has mastered the art of pairing a hair look perfectly to her always stellar outfit choices.

The wispy, messy fringe is already making a comeback (as part of a shaggy hair revival) but Zendaya has given us one more reason to give it a try. Just remember (as with all major hair changes) that while cutting your hair yourself may be tempting, it’s often best left to a professional hairstylist. Or at the very least, you should take a pause to invest in salon-quality scissors.