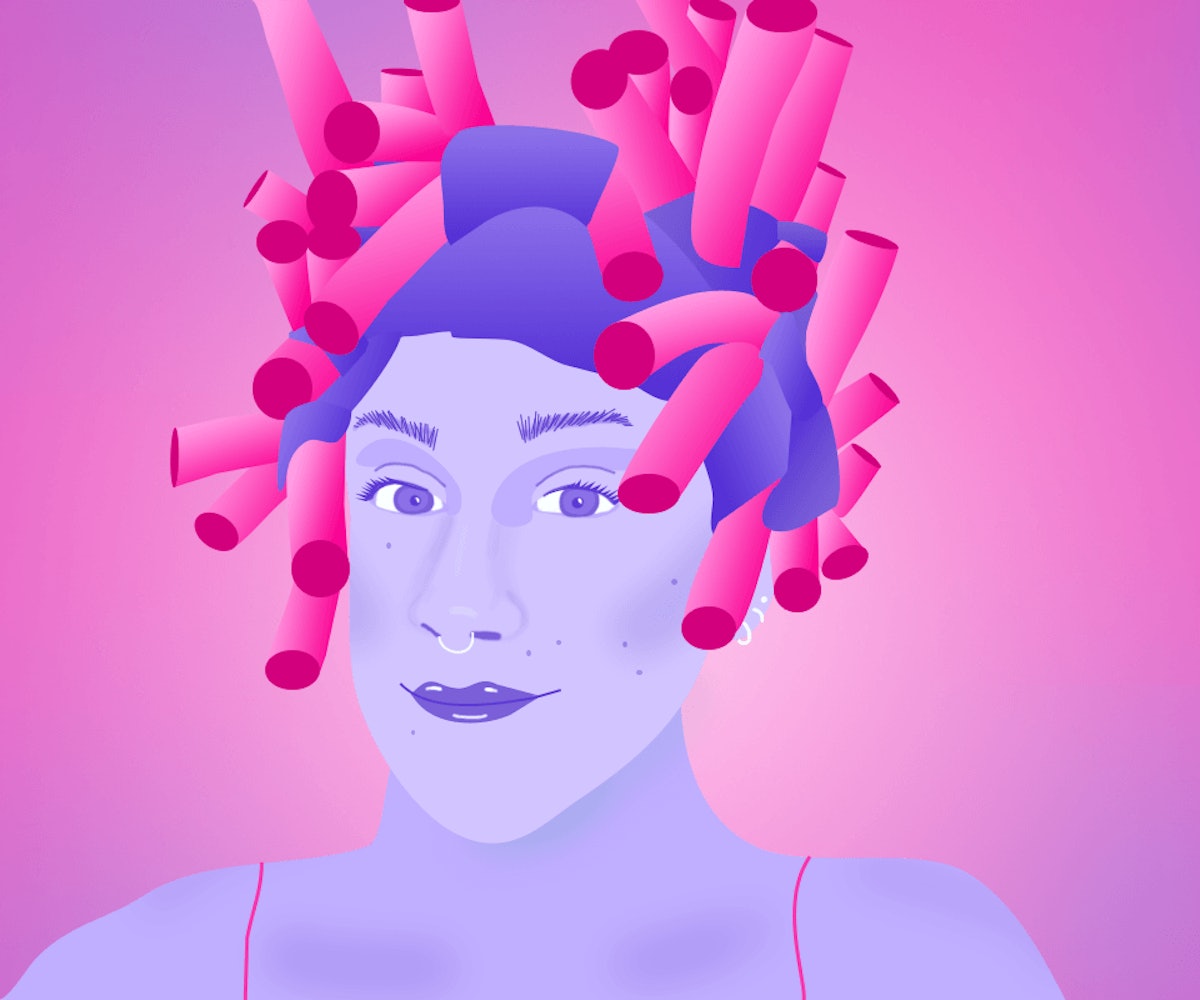 Ever since I was a little girl, I was always deeply envious of my friends that had hair with body. Whether soft, beachy waves or a head full of ringlets, I absolutely hated that—no matter what I did to it—my hair always ended up flat and, thus, boring. I would have given anything to have the ability to swap scalps with my curly-haired girlfriends. And, yes, I know some people wished they had straight hair like mine, but the grass is always greener, right?

It wasn't until recently that I decided that I wanted to do something about it. Much like a lot of my curly and wavy friends have opted to get keratin or Japanese straightening treatments to bring their locks to pin-straight levels of straight (with a bit of elbow grease, of course), I decided I wanted to do the exact opposite: a perm.

Once I decided to go for it, I surprised my hair stylist David Adams of Fourteenjay, asking him to give me the first perm he had given in a very long time. I wasn't able to jump right into it, as, at the time, my hair was already semi-damaged from three years worth of being platinum blonde. But after months of waiting patiently for my ends to grow out, it was finally go-time.

Getting a perm in the year 2019 is not only far less damaging than the perm your mom had in the '80s, but it's also not as wildly curly and, well, poodle-like. Because while perms might have stopped popping up so frequently by the early-'90s, the technology behind them never stopped innovating.

The key to these innovations are perm lotions, which are responsible for breaking down the inner bonds of your hair. "They used to be really rough on the hair and really damage it, but now they're much gentler and a lot softer," says Adams. "Still, it really depends on what the condition of your hair is, to begin with, so if your hair is dry, brittle, and bleached, then it's not going to be conducive to perming. If your hair is healthy and in good condition, then today's perms are not going to ruin it—not any more than normal hair color would."

Since I wanted the kind of perm that would give me just a bit of body and texture, and be able to build on it, Adams opted to go for a weave perm, which would give me a messy, wavy texture without being super-uniform.

So, what actually goes into a perm? Let's walk through the steps: First, Adams went through my entire head of hair, weaving out sections to roll into a curler, kind of the same way a stylist weaves through the hair to create highlights. Once my hair was entirely rolled into various-sized curlers, perm lotion was applied.

Perm lotion contains thioglycolic acid, which breaks apart the disulfide bonds within a strand of hair, which are the bonds that link together to determine the curl pattern (or lack thereof) of your hair. When they're broken apart, they're able to be manipulated. I also can confirm that, unlike the nose-burning, chemical-heavy smell of bleach, perm lotion just... kinda smells like farts. But, hey, it could be worse.

After letting the perm lotion sit in the hair for 15 or so minutes, it was then slowly rinsed out while the curlers were left untouched. From there, a neutralizer— a combination of hydrogen and oxygen—was applied to the hair, again, with curlers still intact. This rejoins the bonds, and since my hair was in curlers when applied, these bonds were rejoined in a curve. "Basically, you're taking the structure out of the hair, and then putting it back together," says Adams. "It's the same as a keratin treatment, except you're doing the opposite. The size of the roller will determine the size of the curl, as well as the technique you use to wrap."

After the neutralizer was rinsed out, I was instructed to not wet my hair again for at least 24 hours, a rule anyone growing up in the early aughts knows, thanks to Elle Woods:

Next, it was time to cut and style.

While my perfectly blunt bob had been perfect while my hair was straight, a bit of work had to go back into it once the neutralizer was washed out. "The important thing to think about here is that it's all about the shape of the haircut, too," says Adams. Since my hair was all one length, the curls layered on top of one another might create an undesirable triangle effect—eek. That's when my stylist Taylor Lambert went in to trim some of the top layers which were now weighed down in order to create a more flattering shape.

The result? Exactly the kind of curly waves that I had always hoped and dreamed of having. Lambert had enhanced my now-permed hair by first applying Aveda's Be Curly Curl Enhancer while wet, and then individually coiling each curl around his finger and blow-drying with a diffuser, finishing off with Aveda's Texture Tonic to give me a messier, tousled texture that my hair had never been able to hold—until now.

However, let's be real, there are going to be some days that I'm way too lazy and don't have time to style my hair—especially after I've spent a lifetime never having to do so. But that's okay! There's still plenty of curl to be had. After waiting for 24 hours to wash my hair, I applied the Be Curly Curl Enhancer and lightly scrunched my hair upward and let it air dry. The result? Effortless, soft, and perfectly messy waves.

Do I hope to kick start the return of the perm? I do. As Adams explains, the world of hair would be a lot more fun if I did. "Perms went through their traditional stage, and then their experimental stage, and then they just died. I think hair is a bit cyclical, and right now, it's a bit dull. I mean, everyone comes in with a picture of an ombré, or a picture of beach waves, and I'm like, Really? Everyone wants long, layered hair, and then gets a curling iron on it. Let's just make hair exciting again!"