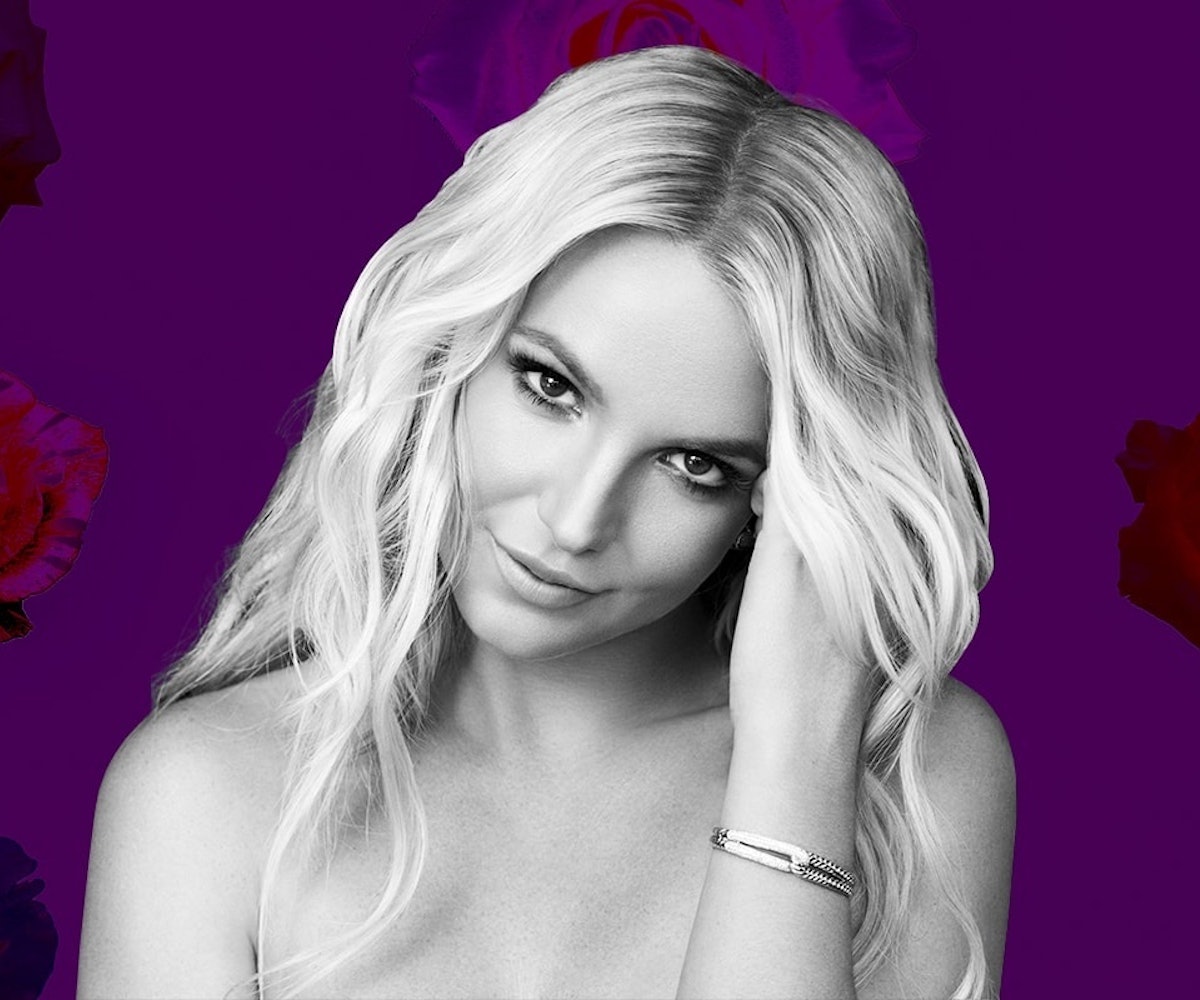 In regards my to sexuality, there's so much from how I grew up—like, for example, the media I consumed and the homophobic culture I was steeped in—that makes me think, Well, no wonder I didn't come out until my 20s.

In the four years since I've come out as gay, I've also found myself in a bit of a reckoning with my mental health, and the stigma that prevented me from dealing with it sooner, one that was also due to the culture that surrounded me, and the media I absorbed—including, notably, the extensive coverage of Britney Spears.

We all remember 2007: Britney's "meltdown" wasn't just splayed across every gossip rag or news show, it was a moment, a cultural phenomenon; a time when the public-at-large turned on Britney Spears for being, well, mentally unstable. It was a cruel and targeted attack against a formerly universally adored singer. It reflected a particularly cruel moment in the media landscape, when young women were mocked for struggles with mental health and addiction, when up-the-skirt photos were routinely produced by ravenous paparazzi.

But, over the course of a decade, the narrative shifted. By the 10th anniversary of that momentous year, people could get "If Britney Spears can make it through 2007 then you can make it past this day" printed on any mug, T-shirt, or hat in cutesy fonts. And then, to prove how far we've come from those days, earlier this month, Spears checked herself into a mental health facility for a month-long stay, which resulted in some mild drama from super-fans who believed she was being held there against her will, until Spears slammed the rumors on Instagram. Save that speed-bump, I noticed how vastly different, almost empathetic the headlines were as compared to 2007.

Still, though, it's hard not to wonder why we opted to disparage Spears for having mental health issues instead of helping her? Because it was fun? Because it was easy to punch down? Maybe it made us feel better? There are dozens of twisted reasons; Sady Doyle examined it well in her book Trainwreck, which outlines all the ways in which and reasons why we demonize women who don't fit into the archetypes of feminine docility that our culture has created.

I watched the public tear her limb from limb, and I'm sure I participated in it, too.

But knowing all those reasons now doesn't change what I experienced back then. I was 16 in 2007. I was a huge Britney Spears fan. And I watched the public tear her limb from limb, and I'm sure I participated in it, too. But I was battling my own mental health issues at the time: burying my anxiety, writing off early panic attacks, telling myself that what I was feeling was controllable or all in my head, reminding myself that I was weak and needed to be stronger. I'm still grappling with how sheltered I was, and how narrow my view of the world was; I never thought I could be queer because I had only seen harmful portrayals of queer people in media; I never thought I could be mentally ill because I didn't look like the "crazy" people I saw, either. I didn't want to be—I couldn't be—that. When Britney shaved her head, I felt it even more strongly. That could not be me. And so I rejected her, and rejected a part of myself.

It wasn't just Spears who was publicly reviled and mocked. The aughts were a time when many public-facing women were torn down by those same people who had built them up. And so, we laughed in Lindsay Lohan's face when she struggled with alcoholism, and with her relationships, and with her health. We made cruel jokes about Amy Winehouse's addiction and suffering until the moment she died. We made lists of Amanda Bynes' "craziest" moments. None of these women were crazy, or unfixable, or vile creatures. But we stripped them of the tools they needed to take care of themselves. It's not that they didn't have access to treatment—but even if you have money, seeking treatment for mental health is hard, especially in America. If you can even figure out the labyrinthine health care system, find a doctor who understands you and can see you regularly—and often for LGBTQ people, that means finding a doctor who works with LGBTQ people—it still might take a dozen misfires to find the right treatment. And back in the late aughts, we had stigmatized mental health and addiction to a point that people were scared to admit that they needed help at all. We didn't help these women; we hurt them. In turn, we hurt ourselves, too. I was certainly hurt.

When I heard about Spears' latest visit to a mental health facility, my heart dropped, because I know that feeling of, This is about to go too far. It's time to seek help. That Spears has access to a facility like that, and the means to take a month off work just to take care of her own mental health, is fucking goals. That's the dream. I don't have that, and neither do most people. We can't afford to take days off—and it's so disheartening.

I know that feeling of, This is about to go too far. It's time to seek help.

Every step of my journey with mental health has been harrowing, from recognizing that I had a problem, to trying to throw a lasso around its neck, to losing it again, to at least trying to manage it. And it's been so harrowing because I didn't have anyone to tell me what to do, how to fix it, who to look to, where to find help. I'm relieved that the newest narrative surrounding Spears was overwhelmingly positive, but the public's reckoning with mental health issues—addressing it at all, destigmatizing it, calling out our health care system for being so insidious—is very new. Like, within the last decade. There has never been a map for how to deal with your mental health.

I remember when I used to think that Britney Spears was crazy because that's what the entire world was saying and because I was 16 and I was scared about who I was; I wanted distance, just like the world did. But as I look back on those notorious images of the singer shaving her head, the pain in her face, the urgency and mania behind her eyes—I don't feel better about myself for it not being a reflection of me. I don't think, At least I'm not that. Instead, I feel less alone. I feel hopeful. I do think, If Britney Spears can make it through 2007, then I can make it through today. But not in a facetious curly-cue printed-mug kind of way.

I feel hopeful because I know what it feels like to endure the lowest lows, the ones you don't anticipate coming out of, but the ones you survive anyway. Everyone's rock bottom looks different. And for people like me, people with severe generalized anxiety and panic attacks, rock bottom isn't a single destination or that place you hit once in your life; it's a location we return to often—more often than we'd like. It's a scary, abysmal brain-hell, and the only way to avoid it is to consistently take steps to manage your mental health—like Spears is doing. And that's brave; trying is brave.

Recently, I returned to rock bottom a few times over the course of three months, and I decided it was time to get back on medication. As of yet, it's too soon to tell my new anti-anxiety medication is the right fit for me, or if it's helping at all. But I knew I needed to try. Because if I don't keep trying, then what's the point? I just have to keep living like this? Spiraling in anticipation of the most trivial events? Shivering at the thought of a date, or a meeting, or a social setting?

I know there's not one be-all and end-all solution to my mental health issues—but there is trying. There is dedication. There is persistence. There is the willingness to seek help when you know you're not okay. If there's one thing I've learned from Britney Spears over decades of bearing witness to her rise and "fall," it's that: the importance of persistence, dedication, willingness to seek help. I love Spears for so many reasons—the music, the icon status, that 2003 VMA performance—but I admire her most for the way she's dealt with her mental health, in the sense that, she keeps dealing with it.

Strip this woman of everything that makes her Britney Spears—or God-ney, as many of us in her stan community call her—and she's still my personal hero, because she's showed me time and time again how to pick yourself up when you're down. Out of necessity. To survive.