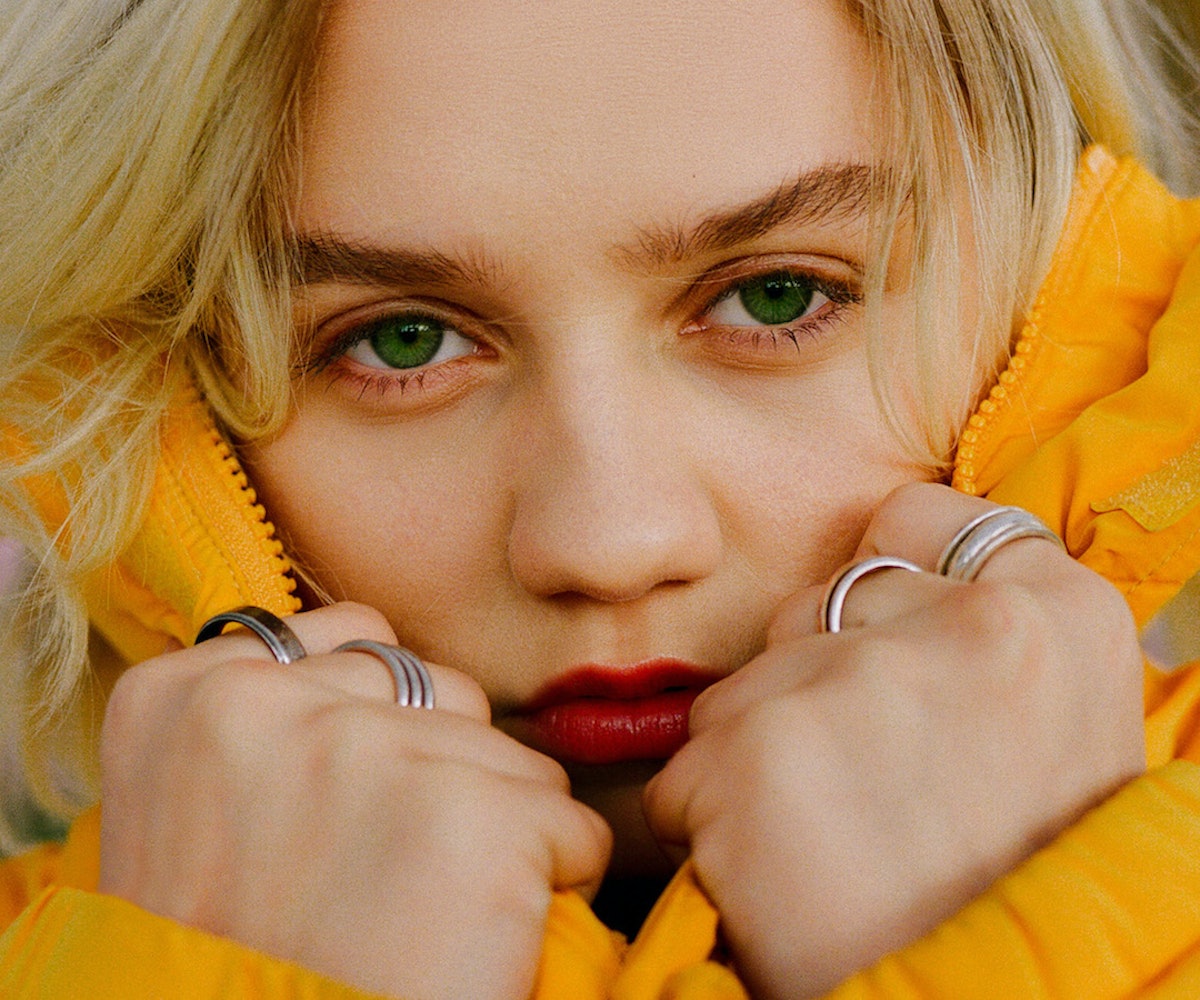 Remember that long ago time on the internet when Justin Bieber found success with a cover video on YouTube, and suddenly the web was flooded with cover videos from young hopefuls looking for musical fame? Carlie Hanson sure does; it's basically what got her where she is today. Inspired by Bieber, Hanson entered an iHeartRadio contest and made a cover video in the hopes of winning tickets to a Zayn concert. Although she didn't win, the company did repost her cover, and she soon built up a fan base who couldn't wait to see what she'd do next.

Hanson told me about what that sudden fame was like when we chatted together a few weeks ago. She said, "I was actually in art class, in junior year… my friends ran in, and they [told me]; we were all freaking out." A few days later, producers reached out to Hanson to record some demos, and she got to work.

From there, Hanson told me, she got "the hell out of" high school, left her job serving up fries at McDonald's, and moved to Los Angeles. Just a day prior to our chat, she'd recorded the video for her new song "Back in My Arms," a track that "is actually about my first relationship with a girl." Hanson told me, though, that she flipped the script for the video, and made it about a robbery. She said, "I love creating shit, especially music videos, that will throw people off and make them ask, What the hell is she doing?" Hanson explained that "in the video, it's me and my two little sisters; we're robbing this truck to get money to bail our dad out of jail. It's entirely disconnected from the [song's inspiration], which is exactly what I wanted."

"I love creating shit, especially music videos, that will throw people off and make them ask, What the hell is she doing?"

And while I maybe secretly (or not so secretly) wished the video was a gay love song, Hanson told me, laughing, "I didn't want the video to be, like, just me making out with a girl in our bedroom." And... I get it. She continued: "We're in 2019, and so much has been done already, you see a lot of the same shit."

Besides, she really loved the robbery concept, and told me with excitement about throwing smoke bombs during its filming, and getting to use an atypical prop: "To stop the armored truck, to stop the drivers, we throw this dead cat—it's not a real dead cat, it's a fake cat." She also got to drive doughnuts with her video dad, who she describes as "a hunk of a guy with tattoos everywhere." What's not to love?

Despite the ease with which Hanson excitedly discussed every detail of her quick rise to fame, stopping herself only every few minutes when she realizes she may have gotten carried off too far on a tangent about dead cats or Bieber, the same ease in spilling it all didn't necessarily come to her songwriting right away. "In the beginning, it was definitely hard, because I was going into sessions with complete strangers," Hanson recalled, though it's hard to imagine her at all reserved, or even nervous. That's all changed though, she said: "Once I found that core group of people I now work with, I feel so great every time I go into a session, because they're like my best friends. I'm very open with them, and it's very easy to talk to them, and any time I want to mess with different sounds, I'm never afraid to jump outside the box for one session to see what happens." It's a kind of comfort and freedom she considers herself very lucky to be able to have as an artist.

Although Hanson's material goals for herself can seem pretty humble—in five years, she told me, she hopes to be in a house rather than a studio apartment, and maybe have a van similar to Kelso's on That 70s Show; she already has an image of it tattooed on her arm—her artistic dreams are lofty. She told me she has "over 100 songs" ready to go, and while there isn't an album on the horizon quite yet, she's ready to start releasing them all.

But even with so much burgeoning potential revealed to the world, it's clear it hasn't all gone to her head. Hanson knows how to keep herself grounded, even when she's deep into recording and her "head wants to blow up." When she's feeling drained, and finally makes it home, she likes to "throw my phone away for a day and just paint. Play video games. Just chill." Maybe she'll call up some friends, maybe she'll smoke some weed. "Always staying in touch [with family] is good," she added. Oh, "and just hugging dogs."