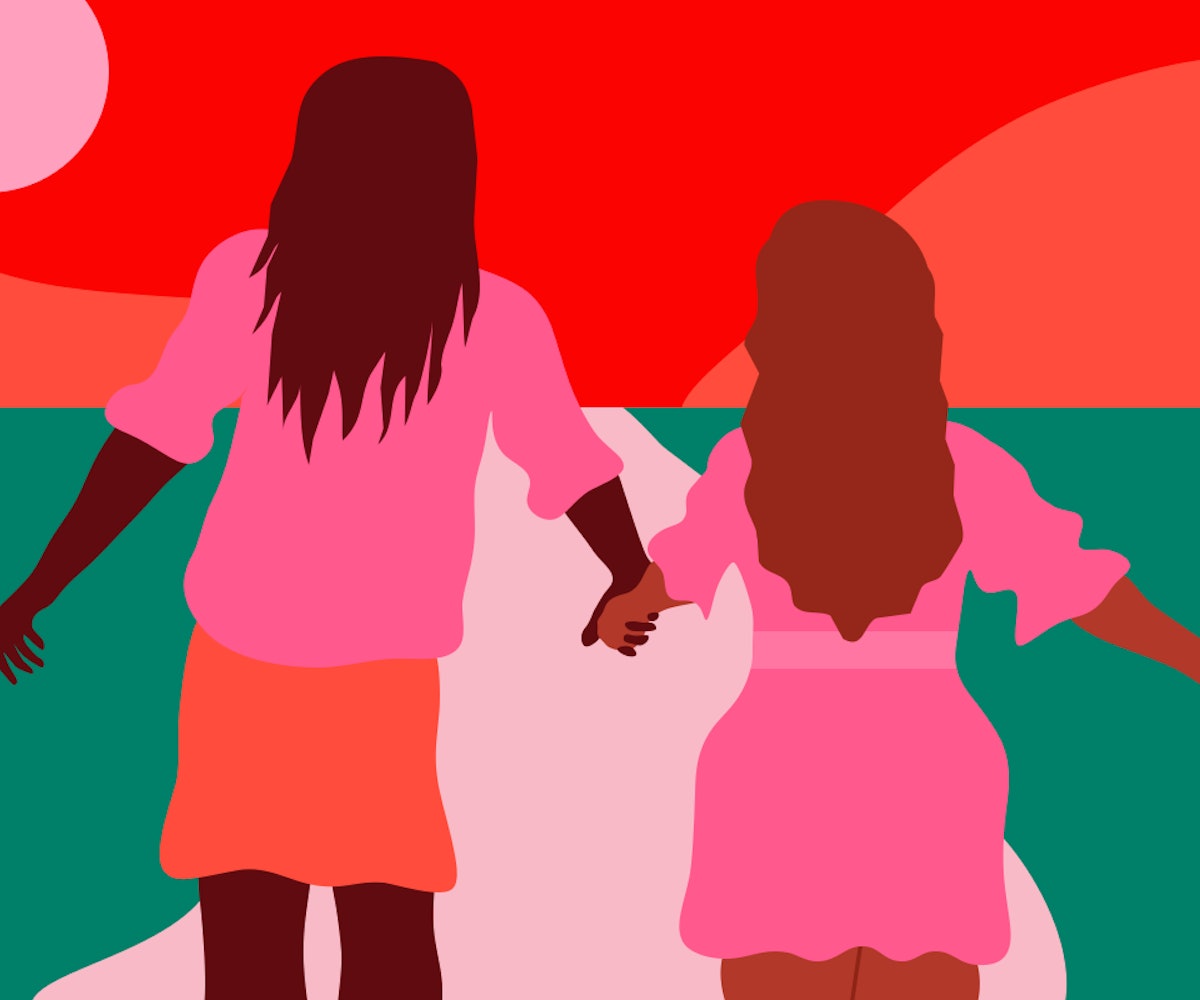 Suddenly, my friends are having kids. This is happening later than might have been expected, because I live in a big, expensive, liberal city, and I'm part of a generation that has crushing debt, little economic mobility, and waning loyalty to the norms of previous eras; but, it's happening. The wave of weddings happened late for us, too; we were all in our late-20s by the time anyone in my several overlapping extended groups of friends got married, and we were pretty much all in our 30s before anyone started having kids.

In some vague way, I guess I expected this—my friends and I had always joked about our future kids, in the unrealistic, short-handed way that people do when imagining the future—but now that it has, I'm surprised by both how much and how little difference it makes. My friendships are the same, and my friends are the same people they were, which I think I did not expect; I assumed parenthood would transform them into distant, unreachable adults, and it hasn't. Friends who have had or are having kids remain the exact same people they were; when we hang out it feels much the same, even our topics of conversation are not nearly as different as I expected. But at the same time, I have realized that I am now essentially separate from these friends in a new way. Our lives, which until recently had seemed easily comparable, are now split into distinct categories.

Friendship at a younger age is about a kind of sameness; in middle school and early high school, its currency is knowing about the same things. I remember how many of my friendships were established by me pretending to love a band or a TV show, then rushing home to buy the CD or watch the TV show, trying to catch up on it so that I could speak the secret and crucial language that would bind me to those other people. (I am not still friends with many of those people, but it is how I discovered many of my favorite bands, and songs, and books, and movies). Friendship was a proximity; in college, I became best friends with a woman who is still one of my closest friends because at an orientation event we were both nervous and lonely and she grabbed my arm and said, "Can we be best friends?"

In my 20s, friendships involving declarations of lifelong loyalty happened because I stood next to someone, because I had 45 minutes of good conversation at one single party, because they knew someone I knew. We decided on each other. We were all in the early stages of expectations and work and career, home and family, achievement and desire, and so we were able to believe our lives to be similar enough that similarity could be our point of connection. Sameness is an impoverished and self-centered way to choose who to care about and how to care about them, but for me—well into adulthood—it was the default one.

Of course, this sameness was mostly fictional, rendered out of very small matching biographical facts that were and are far less significant than all of our differences; for the most part, friendships forged through a kind of "we're a matched set" logic are always this way. We chose to overlook the more significant differences (in background, in priorities, in resentments and life experiences and disadvantages and privileges and goals) because focusing on our similarities made us feel close to each other, and made us feel less alone, less strange, less isolated within our particular circumstance and personality. In my 20s, it was possible to do this with my friends, all of whom are for the most part late-bloomers and for the most part did not start considering—at least not out loud—children or marriage until the last few years.

But as these choices have set in, the fiction of a primarily shared experience has begun to crack, and I find myself having to reckon with new divisions between myself and my friends, and with a part of our lives in which we cannot always pretend to sameness. A few years ago, when people started getting married, it didn't feel like this. Marriage is a big deal, but it is also materially and fundamentally not that much of a lifestyle change for a couple who is already living together, already to some degree combining finances, already in a long-term relationship whose patterns are already set and agreed upon. It also has no real deadlines; some people's families may still pressure then to get married before 30, but marriage has no biological imperatives either driving or limiting it—except, of course, the choice to have kids, which is in many ways the opposite: biologically driven, fraught with external pressures, and absolutely on a deadline.

Most people who decide not to have children have, I think, some kind of conversation about it with, at the very least, themselves. They reason out the arguments for doing and not doing it, the pros and cons; they envision different versions of a future, and make the kind of choice that can be hung on some specific, articulable factor. They make a choice. As I have reached an age where, more and more often—always to my surprise—I am asked to explain whether I want kids, and if not, why not, I realize that I have never made a choice at all. When I was a teenager, like many other privileged, rebellious teenagers, I said I didn't want kids, and, unlike all the other things I said I didn't want then—marriage and monogamy and security and religion and growing old and growing boring; all of which I ended up having—I never changed my mind about having kids.

As a teen, I sometimes said that I was too selfish to have kids, and I suppose that reason has turned out to be the truth—I am certainly greedy for time alone and time with my husband, for long vacations, for acting like a kid even as an adult, for weekends doing exactly whatever the hell I want to do, for the ability to cancel plans.

But, that's merely one of many reasons from which I could choose. Also: I am too disorganized. I don't want to leave New York or my very small apartment. I saw the generational traumas visited on my parents by their own parents and then handed down to me by them, despite their abundant resources and absolute best intentions, and I do not want to continue that cycle. I do not believe myself a good enough person to feel comfortable with the amount of influence I would, as a parent, have on a child. I am bad with money and, as a result, do not have very much of it, or at least not what feels like enough to support 18 years of someone else's life. I am not patient. I am not always kind.

But the truth is that none of these are the reason, because all of these reasons indicate a conscious choice; I just don't want to. It is quite simply that I have never once had a single impulse toward parenthood; I am in my mid-30s now, and the famed biological clock I have heard about all my life has never shown up for even a moment. I have never once imagined a version of the future in which I had children. I can no more explain it than I can explain why I am tall, why I am attracted to the people I am attracted to, or why I like the color green so much. Actually, I can explain all of those things more easily and technically. There is perhaps nothing in my life that seems to have so little to do with choice. I don't want to have kids because I don't want to have kids.

I have never once had a single impulse toward parenthood

The paradox, of course, is that it takes a hell of a lot of available choice for me to be able to say that not having kids isn't a choice for me. I grew up in a family who never pressured me to have children, and instilled in me very few heteronormative expectations. Although it would not have been pleasant, had I ever needed an abortion, I would have been able to turn to them for help. As I got older, the same was true of my friends. My husband had made the same choice long before I met him, and feels as secure in it as I do; it was one of the reasons we decided to start dating, and a conversation we had (casually, easily, because we were both so certain) before we went on a single date. I live in a state, and a city, where an abortion is relatively easy to obtain, and where most people share a politics that promotes reproductive autonomy. I am both lucky and unusual that I can call my own deep-rooted certainty that I don't want to have kids an imperative. The tiny little terrariums in which I have lived my life have always offered not just the option to choose whether I want kids, but a lack of judgment or pressure about that choice. Besides the wishes of two ex-boyfriends who hoped I would somehow change my mind, no one has ever even regarded it as strange that I've never wanted kids. I have had a unique privilege to shape and cut and paste and prune and trim my life into exactly what is comfortable.

I have, however, begun to understand that this choice is unusual, and cuts a line of difference between myself and many people I love. I have watched friends have baby-naming parties, watched them go through the intensely specific science-fiction experience of pregnancy, attended first and second birthday parties, sent congratulations, not known what questions to ask in the spaces where I once expected myself to always say the right thing. I have rarely felt so ill-equipped to advise on or even discuss a life experience; I have rarely felt so fundamentally separate from people I know. Little else has ever made the fictions of sameness, and the truths of difference, feel more laid bare, or more unbridgeable. I am happy for my friends, but I am newly aware that I am standing at a remove from them, and that the paths we have taken through life are fundamentally not the same. Our new experiences do not and cannot include one another.

That's the thing: Having a child is a choice that highlights the larger idea of choices and how they define us. Our lives are narrowed again and again by choices, until our choices have created a single path out of what once looked like a wide and open field. We sort and shape ourselves by shutting down some paths whenever we choose others. What I am really reacting to when I find myself overcome with the distance between myself and friends who have had kids is that, as we get older, each choice shuts down a universe of choices we did not make. We are whittling ourselves smaller, paring and pruning and cropping and editing down to a one-sentence story.

When I was younger, it was possible to befriend anyone with some assumption of sameness because the future was unknown. If we shared nothing else, we might share the same potentialities; after all, who knew what could happen? The fact of children, as the people I love begin to have them, reminds me that our choices make us specific and dissimilar, and that they always have. I meet and love and exclaim over my friends' children, and then I am always relieved to go home to my house with my husband, both of us selfish and greedy—and happy.