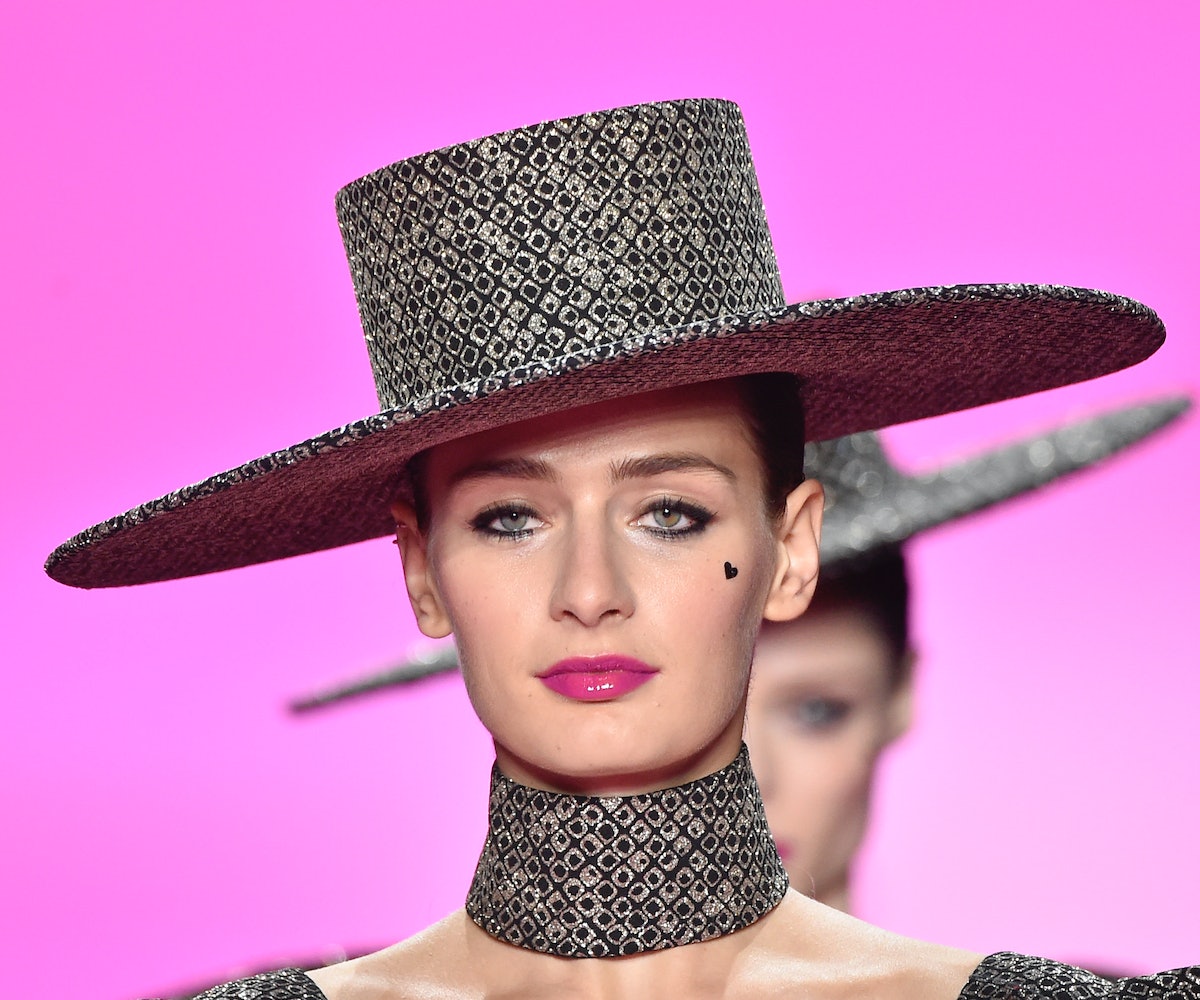 There's been a lot of hype around the latest comic-turned-superhero blockbuster Birds Of Prey, and it seems as though not even fashion designers were exempt from finding inspiration in the story — or its heroine. Kicking off the Fall 2020 New York Fashion Week, Christian Siriano sent models down the runway in Harley Quinn-inspired Birds Of Prey glam, from the hair and makeup all the way down to the nails. "This season I let my imagination run wild," Siriano shared in a press release, noting that the idea of Quinn running through an abandoned carnival fun house led him to "a mythical, gothic, and artistic experimental collection."

Inspired by the shiny, sculptural pieces in the collection, Maybelline New York's global makeup artist Erin Parsons recreated the comic book character's look with a soft and subtle twist. According to Parsons, Siriano had to have Quinn's signature heart tattoo, which the team drew on each model's cheek with a craft store stencil and Maybelline's Liquid Eyeliner. For a healthy flush, the team used Cheek Heat Gel Cream Blush in Berry Flush, and used a bold, orchid pink pigment on the lips, inspired by the ballgown Harley Quinn wears when dressing up like Marilyn Monroe in 1953's Gentlemen Prefer Blondes.

The look was rounded out with top and bottom mascara, using Maybelline's Falsies Lash Lift, and the Tattoo Studio Sharpenable Gel Pencil for a lived-in subtle shadow. "It's really just about a black pencil, the Tattoo Studio Pencil, and we blended it out slightly on a bare eyelid, and that gives a little bit of shadow," Parsons tells NYLON. "It's the easiest eye, it's a five minute eye, we want it not perfect."

For the hair, TRESemmé managed to channel Quinn's cotton-candy dyed hair without feeling like DC Comic cosplay — a notable feat considering just how animated and costume-ready her overall look leans. To master the subtlety, celebrity hairstylist Justine Marjan created sleek ponytails for most of the show's models, super-slicked in the front using the TRESemmé Extra Hold Gel; in the back, their smooth ponytails were blended with blue and pink extensions. "I gather the hair right where the two ears meet in the back of the head, and do it half up first so I have easier control over the hair," Marjan tells NYLON of achieving the slicked back ponytail on your own. The team used the brand's new Dry Oil Spray in Smooth to add the silky smooth finish to the hair and keep frizz and flyaways at a minimum.

Finally, Julie Kandaelc created a jewel-inspired nail look for Essie, resulting in a strip of glitter using the brand's Set In Stones, over a black base coat in Licorice . "We wanted to do something that was elegant and edgy together," she tells NYLON. Kandaelc also noted that the team wanted everything to be approachable and easy to DIY at home — which is why instead of fancy tools, the entire look was completed using just the bottle of polish. "Instead of just swiping it, because you'll get too much clear [polish] on the brush and it'll take longer to dry, I take [the brush] out first, and blot it on a paper towel and then just dot it out on the nail," she adds of placing the glitter.