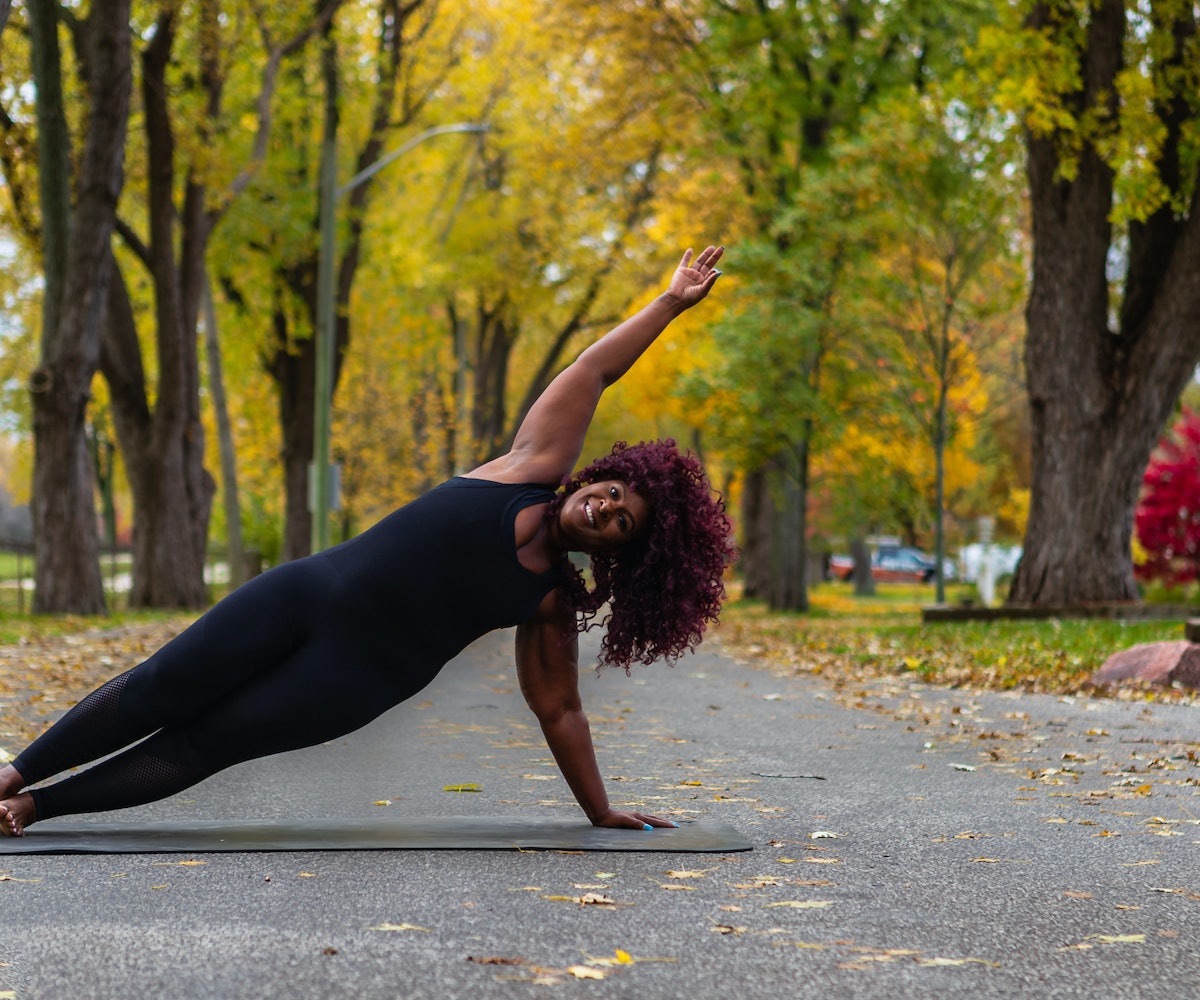 Dianne Bondy, a yoga teacher and author, has been doing yoga her entire life. She started practicing with her mother at the age of three, in the basement of her childhood home, after her mother came home one day with a book titled Stay Young With Yoga. The 30-minute practice, which typically began with her mother bribing her with a butterscotch lollipop, taught Bondy how to meditate (or, in kid terms, stay still). The rule was that she had to stay quiet until she finished her candy, giving her mother a short daily respite from her three young children.

By practicing yoga at home with her mother and at a community center, which were both "very non-threatening," Bondy grew to love the supportive environment that was fostered. She was under the impression that all yoga practices were like this, with no judgment involved; but, years later, when Bondy decided to visit the most popular yoga studio in her town for a lunchtime ashtanga class, her bubble was promptly burst. After the receptionist gave her a once-over, she blatantly questioned Dianne's ability. "You know this is going to be hard, right?" she asked. What the receptionist didn't know was that Bondy had been practicing her entire life, and probably "longer than [the receptionist had] been alive."

Unfortunately—and ironically, considering yoga's origins—many Americans think of yoga as being a space mainly occupied by thin, white bodies, but not only is that not who Bondy is, it's also definitely not a uniform representation of yoga practitioners. And Bondy has made it her mission to disrupt that understanding. Her philosophy is simple: Yoga is for everyone, including people in bigger bodies, people of varying ethnicity, ability, mobility, and those who have been traditionally excluded from the yoga narrative.

We sat down with her to discuss body acceptance, the power of inclusion, and who yoga is really for.

Do you remember the first time you went to practice at a studio?

I do, because I'm still traumatized. I'm sure I have PTSD from it. I went to, at the time, the most popular yoga studio in town and it was the first time outside of my comfort zone. I was six weeks postpartum, and feeling all kinds of feelings about that. I go up to the front desk, and whoever was signing me in sort of gave me the once-over and says, "You know this is gonna be hard, right?" And I'm like, "I've been practicing this probably for longer than you've been alive."

For them to look at me and make a judgment based on my body kind of set the tone for the rest of the class. It was a lunchtime ashtanga class, so it was very shortened down, and I wasn't familiar with the ashtanga flow—I'd been doing vinyasa and all kinds of other stuff. So the teacher got pretty angry with me pretty quickly because I wasn't keeping up. Had I gone to a vinyasa class or a hatha class I'd probably have been fine, but because I was in an ashtanga class, she was pretty upset with me. It left a pretty bad taste in my mouth and I didn't go back. It was a miserable experience—but, it was fine because it led me to open my own studio. I never wanted anyone to feel that they didn't belong in a class, regardless of what the class might be.

How is your approach to yoga different?

Often, when we go to a yoga studio's website, we're seeing the very athletic, the very flexible, the very able-bodied, the very pretty people doing the yoga practice. But I wanted to show all kinds of people. I'm not saying the other people aren't pretty, but I'm saying that there's an over-representation of one particular body type.

When people would walk into my studio, I'd beg them, "Please please please, can we do a photo shoot? I'll give you a free week." I created T-shirts for everybody… There was this resistance to being photographed while doing yoga because people didn't look like those yoga pictures that we predominantly saw. There was a speech I gave everybody—and still do when I teach. I always tell people, "We are disrupting the constant imagery that is very specific to one group of people and showing the world that yoga looks all kinds of different ways." Because I've had so many people reach out to me and say, "I started practicing yoga because I saw you practicing it, and you have my kind of body." Or, "I started practicing yoga because you broke down this pose for me." So I said, "How amazing would it be if someone saw a picture of you doing your practice, your way, looking however you look in your asana practice, and said to themselves, They look like me, therefore I can do this, too?" So I was very clear about creating forward-facing imagery to disrupt the current imagery that I was seeing based around yoga.

Have you had any pushback?

I have definitely had pushback from "purists." If we want this practice to last forever—I know it's been around for 5,000 years in some capacity, whether that's asana which is relatively new or the philosophy of it which is 5,000 years old—then it has to change with the times. I don't believe that, at any point in the history of yoga, it was designed to be exclusionary, that it was designed for only affluent people, able-bodied people, or only people who are living in India.

I don't pay any attention to the purists. I find that that gets to be very dogmatic, and I'm just not a rigid person. I want to remain flexible and open to the possibility that this is for everyone. And if tradition doesn't allow for that, then fuck tradition.

How would you modify a pose to be accessible for someone?

I always like the idea of moving stuff out of the way during our practice, especially with bigger bodies, because stuff just runs into other stuff. It's okay to gently but lovingly move bellies out of the way, move breasts out of the way. I'll use straps, chairs, books, blocks, anything to help people move.

So, if someone is missing a limb, how do we compensate for that? Do we use a chair? Do we use the wall? For example, I have someone who is really stiff and can't fold forward. So I use the wall, I use blocks so they can put their hands on the wall. There are so many ways we can adapt this practice so that all of humanity feels included, not just a privileged few.

I'm currently doing a 200-hour teacher training, and one of the students is a double-amputee. So, how do I help John around the mat? Sometimes, a bolster gives him the elevation so he can keep up with the traditional asana practice or traditional vinyasa practice.

How did you discover these modifications?

I've been teaching for a very long time, so I've been around the sun a few times. I think, for me, working in a plus-sized body meant that I just had to figure it out. I studied Anusara yoga before it went the way of the Dodo bird, and they gave us great training on anatomy and physiology of the body. Then I could figure out how to negotiate the anatomy.

Also, having people coming to me and saying, "What can I do?" and us figuring it out. If it wasn't for allowing all kinds of people, or making a space to make all people feel safe to come practice, I would have never had the opportunity to work with different kinds of bodies, and that has been the most amazing teacher of all.

What is the most valuable thing that you've learned from practicing yoga?

That we have to be patient with ourselves, that anyone can do it. That we have to be open to hearing people's stories and believing them when they're talking about their experience of being in a yoga class. Because often when people talk about their negative experiences, the reaction is, "Oh I can't believe it! Yoga teachers are supposed to be 'fill in the blanks here.'" But at the end of the day, we're all human.

It's given me a really great lens into humanity and teaching people how to be in their bodies exactly how they are has been the greatest gift.

Do you think we're making progress in terms of representation?

I totally think we are. Five years ago, you and I wouldn't necessarily be having this conversation. We are slowly but surely seeing mainstream yoga outlets bending to the will of the people. We recently saw Yoga Journal put Jessamyn Stanley on the cover, and I really never thought that that would happen. We're seeing all kinds of things happening that weren't happening in as little as five years ago, but we're still stuck in this image of what fitness looks like, what health looks like, and what yoga looks like.

When I scroll through Instagram, I'm seeing anybody and everybody sharing, and I'm grateful to social media for that. I think that's been the biggest catalyst: To no longer have to wait for someone to recognize you, you can recognize yourself, and you have a free platform to share what you've learned with everybody.

Do you consider yourself part of the body acceptance movement?

I do, I hope so! I love it. I'm a little cautious around the phrase "body positivity," because it's been co-opted and has come to mean so many things. It has become quite watered-down, but I am a big fan of body acceptance. We've all been living in this world where we're conditioned to believe that we're not good enough, and that there [are such things as] figure flaws.

Who do you think yoga is for?

Yoga is for all of us. When it first started out, primarily it was for men. That's who dominated the yoga culture for a long time. Now it's shifted to primarily women practicing yoga, which is difficult because men now look at it and go, "Oh, well that's something that women do," when it's not. It's something we can all do and that belongs to all of us. There's value in all kinds of styles of yoga, there's value in all kinds of interpretations of yoga, and it's important that we stay open and flexible to how yoga grows.