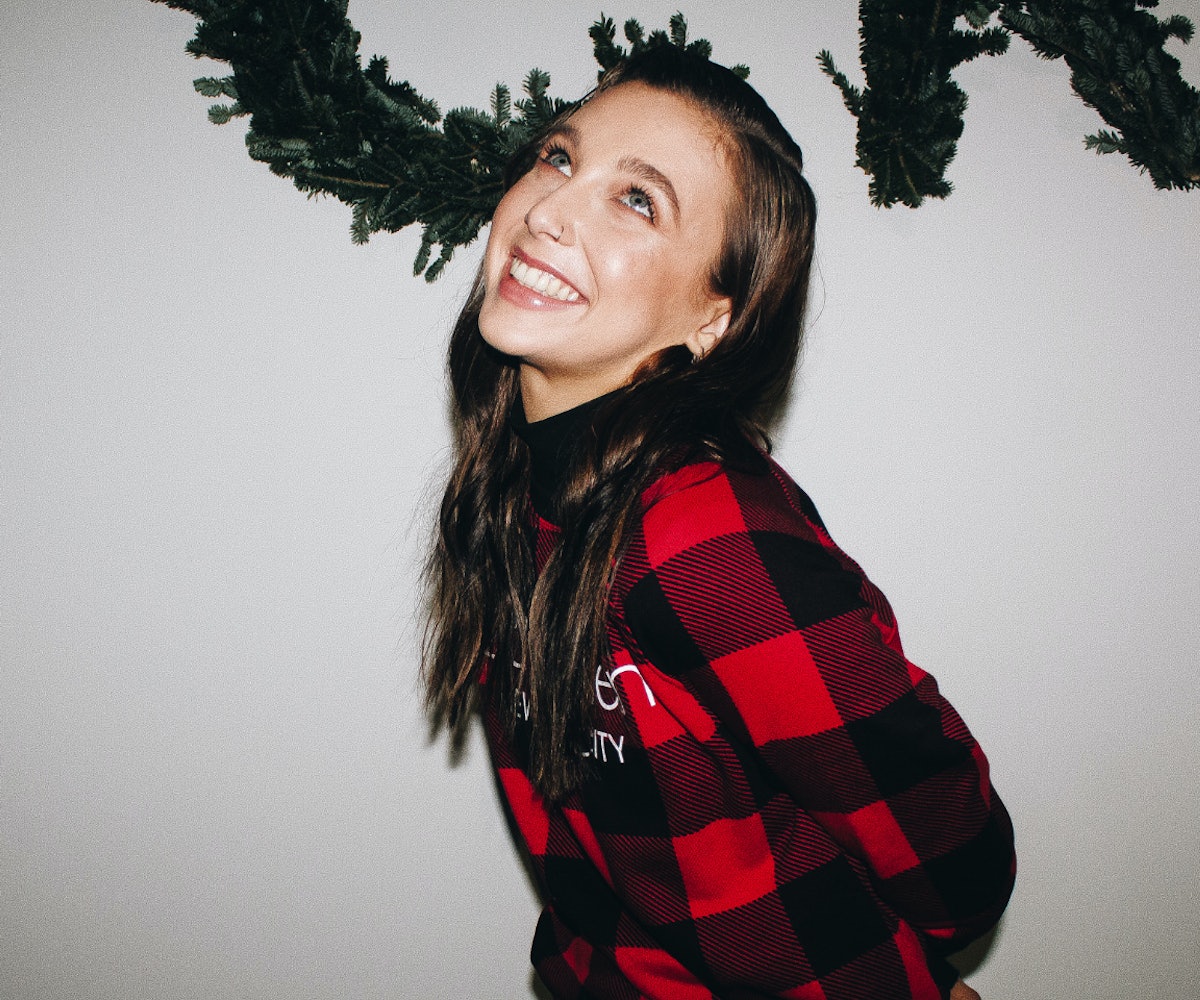 Emma Chamberlain has had the best year ever. To capture just a few highlights, the past twelve months have brought the Los Angeles-based YouTube star more fame, a co-sign from the fashion world (runway shows, photo shoots, campaigns, etc.), a podcast and a Snapchat series, and her new cat Declan, which, of course, resulted in his very own Instagram account (and he's already nearing close to half a million followers.)

So now it's time to celebrate. On Wednesday, Chamberlain made one of her increasingly frequent trips to New York City, this time for Calvin Klein's holiday party. With Taco DJing — and best friend Kendall Jenner by his side — the crowd (dressed in cozy matching PJs by the brand) was either dancing to Rich Boy's "Throw Some D's" or relaxing and taking selfies in a pool of pillows, which took up the middle of the event space alongside the dance floor.

"I kind of want to dance. The music just got so good," said Chamberlain as we found a more private and quiet place to chat. "I never leave my house so it's always really nice to actually leave my house and get to socialize a little bit. I saw some friends that I haven't seen a while so that's always cool to see them unplanned."

She goes on to elaborate by making a heart out of her hands, but obviously my recorder wouldn't be able to pick that up. "I don't know how to put that into words," admits Chamberlain. "Put in 'baby hand heart.'" Done.

Here, Chamberlain chats about her holiday plans (and what she's gifting her mom and dad), her Calvin Klein "IRL" shoot, and her outlook going into 2020.

What are you up to for the holidays? Does your family have any traditions?

I'm going home to see my family. Honestly, I don't have any traditions. We just celebrate all as a family. Well, we do brunch at my grandparents' house that's revolutionary. So tasty. So good. My grandma [makes everything]. Thank you, Nana. Appreciate you. She makes the best quiche ever so I look forward to that for the whole year. I literally wait all year for that quiche.

Do you plan on getting gifts for your parents?

What do you plan on getting them?

It's OK. They won't read this.

OK, I can. I'm actually getting both of my parents clothes, like really nice clothes because I know both of my parents don't like to spend money on those things. I'm also going to get my dad a surfboard because he surfs every day. And as for my mom, I like to take her shopping and if she wants something like, I don't know, an iPad or something, I'll say, "You know what, that's your gift." I feel like I'm my parents' parent now. Like with Christmas, I'm their Santa. It's switched because I don't let them buy me anything.

Do you get gifts for your friends?

Not really. My friends and I tend to agree on no gifts because it gets messy. We'll all spend too much on each other and we'll feel guilty, so we're not doing gifts this year.

Looking back at 2019, what are some of your most memorable moments?

My god, this year was a lot. Definitely doing the "IRL" shoot with Calvin Klein. With my YouTube channel, I'm starting to settle into that and getting more consistent and finding a good way to look at it for me, mentally, so that I can sustain it. Also, I got a cat. See that's the line I was thinking: What was interesting that happened? I got a cat, but do I say that? So yeah, I now have a child. It's a cat, though, not an actual child. No babies right now. Thank you.

Tell us why the Calvin Klein IRL shoot was a big moment for you.

That was a really cool experience for me. It was a big stepping stone for me growing up-wise because it's a different type of shoot and such a different energy that I'm used to — kind of more of an adult thing and I'm used to doing kid things. But I'm now 18 and I'm an adult. I'm doing things that make me feel like an adult in a sense. So that was really cool and it was just fun, too. It was something I never thought I'd do ever, so it was a lot of emotions. I was proud of myself, but also kind of nervous, but excited.

What's your outlook on the year 2020? Do you believe in New Year's resolutions?

I take it day by day. I think for me, goal-wise, is to be as happy and healthy as possible and only have good people in my life. Keep working hard and keeping my morals and all that in check. I try not to predict anything too much, and I don't really believe in New Year's resolutions. You might as well do it when I feel there's a need to change something rather than for the year to change.

I would love to move to New York. I would love that. So if anybody has cool apartments for rent, hit me up. DM me.