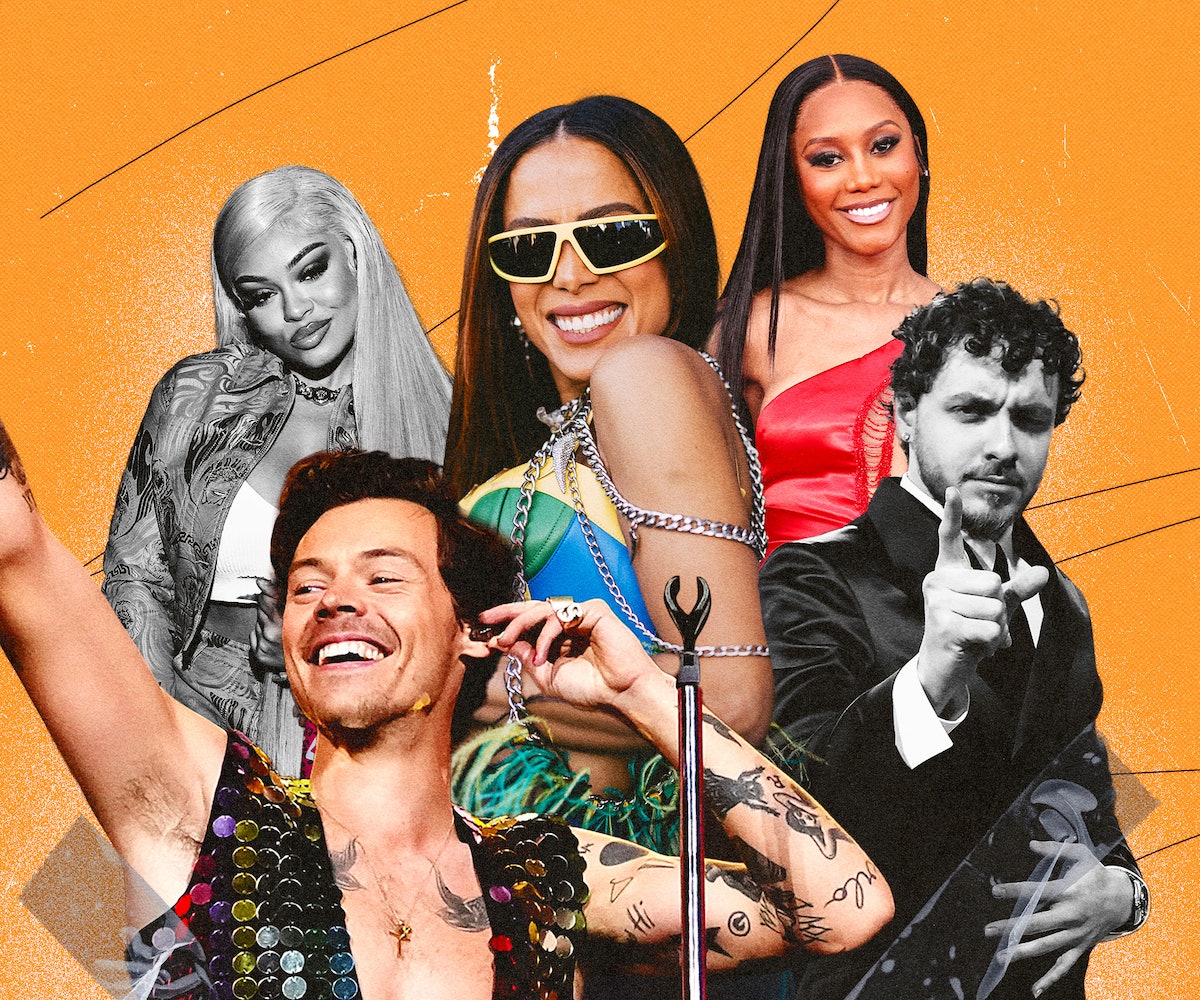 by Steffanee Wang and Claire Valentine
May 6, 2022

The year’s biggest race up the charts has officially commenced. What will be crowned 2022’s song of the summer? As it often goes, the playing field is already crowded with promising submissions from Harry Styles, Jack Harlow, Latto, Muni Long, and more. Below, we make our predictions for the songs that’ll end up rising to the top — as well as some of our favorite dark horse contenders — to soundtrack your pool days, barbecues, and late night functions. Make like a dolphin and dive in.

Who would’ve guessed that one of the biggest songs of 2022 would include a heavy sample of Fergie’s 2006 hit “Glamorous?” Considering the heavy-handed nostalgia baits that saturates all media nowadays, well, perhaps a lot of people would have. Still — Jack Harlow’s re-finesse of the iconic luxury anthem is master class, and it’s likely the biggest reason why “First Class” is the most obvious top runner for 2022’s song of the summer.

With its sumptuous sonic palette, Fergie’s iconic hook, and Harlow’s own suavely cool delivery — rapping about sex, security, and the superstar life, all hot topics for a summer smash if you ask us — the song was basically scientifically engineered to squirm into the earholes of Gen Z and millennials alike and take off virally, as it already has on TikTok. It’s veritably made a superstar of Harlow in the few weeks it’s been out, and in the real world, its impact is just as sticky. I hear its familiar pulse radiating from cars driving down my street in Brooklyn and virtually every time I go to the grocery store, a surefire marker of a summer hit if there is one. Sure, June marks the end of cuffing season, but the world’s already got a new favorite boyfriend. — Steffanee Wang

From the first few seconds of Latto’s “Big Energy,” a bright and inherently summer energy exudes off the track. A lot of that can be chopped up to the song’s brilliant use of the beat from Mariah Carey’s “Fantasy” — it itself sampling the original 1981 song Tom Tom Club’s “Genius Of Love” — which grants the whole affair a youthful familiarity (it’s the summer of samples apparently). But rising rapper Latto is also responsible for a great chunk of the track’s playful appeal. Her attitude-filled delivery, ultra flirty hook, and repeated mentions of big... energy gives the much-loved beat a gleaming new layer of pretty pink paint, ripe for speaking to the 2022 era. This is the song that you want to be listening to when you’re getting ready for that late night function, and again at 2 a.m. when you’re sloppy-drunk on the dance floor. — SW

We all love summer, but sometimes the blues hit. That’s where Harry Styles’ “As It Was” comes in. The “Watermelon Sugar” singer’s big song this time isn’t about sex, but loneliness, which feels kind of fitting as the world is once again trying to earnestly come back from the devastation of the last two years. Sometimes, you just wanna skip the function and party in your own at home, wailing: “You know it’s not the same as it was.” Or maybe that’s just me. — SW

Nowadays, you can’t get a charting hit without first conquering TikTok. Muni Long’s sensual and seductive “Hrs And Hrs” was arguably the platform’s first major hit of the year after it spent the last two months of 2021 slowly bubbling up. Fast-forward several months and the song is still as assuredly making the rounds. And as the weather warms up and nighttime activities get stickier, I expect this will only increase in airplay. —SW

Anitta is everywhere. In the last month alone, she’s been spotted at the Met Gala, Coachella, and as the hot girl cameo in Jack Harlow’s latest music video — which can only mean one thing: ubiquity is coming for the rapidly ascending Brazilian pop star. If not her face, then her earwormy, reggaeton steamer “Envolver,” which has not budged from the top-quarter of the Billboard Global Excl. US chart for eight weeks. — SW

Somewhat of a dark horse on this list, Florence + The Machine should be remembered as an OG song of the summer artist. Her anthem “Dog Days Are Over” was a fever that took over the country back in the summer of 2010, and her 2022 song “Free,” runs on a similar wild-hearted energy. The track isn’t about the sunniest topic — anxiety and depression — but there’s a racing pulse in its joyous melody that’s truly infectious. If there’s an excursion into the wilderness in your horizon this summer, queue this song up. —SW

Welcome back, Psy. It may not be 2013, but the world could desperately use the slapstick humor, playful banter, and pop slickness that shot his previous crossover hit “Gangnam Style” to stratospheric heights. Luckily, “That That,” his latest cheeky song celebrating the end of the pandemic, includes all of that and more — like its star-powered assist from BTS’ Suga. —SW

For some reason, the biggest heartbreak songs hit the hardest during summertime, and Tove Lo’s devastatingly great “No One Dies From Love” is a fist-sized wallop to the gut — in the best way, of course. We’re not sure what the Swedish pop singer puts in her songs, but there’s no way to resist the dizzying ‘80s pop beat and distorted robotic AutoTune which make this one great. I expect it to be played at every sweaty rave I attend henceforth. —SW

After the success of “Havana,” it’s safe to assume that Camila Cabello has nailed the scorching season’s formula. Her song “Bam Bam” isn’t as obvious of a hit as the aforementioned, but it’s a sneaky little bop with an Ed Sheeran feature to boot. We predict you’ll be well acquainting yourself with its horns-laden mid-tempo beat at weddings, barbecues, and pool parties soon enough. —SW

It’s always a good day for music when an artist moves to California and gets inspired by the landscape. Carly Rae Jepsen’s newest offering, “Western Wind,” is a gently euphoric reminiscence on falling in love with the force of a mountain breeze — at once powerful and sweet. Hypnotic surf guitars buoy Jepsen’s radiant vocals, and the track overall is a clear turn toward Jepsen’s folksy roots, though there are still traces of the disco-pop that fans love. — Claire Valentine

The king of verano is back. A Bad Bunny bop has been a fixture of the hotter months for the last few years, and he’s doing it again with his delirious love song “Moscow Mule.” Make like the song’s drink title and get messy. —SW

After taking a hiatus in 2018, the Joe Jonas-led funk pop band DNCE returned with “Move,” and it’s an invitation to do just that. Pure dance floor fun, you’ll be hearing this song at weddings, in Walgreens, and your own headphones all summer long. — CV