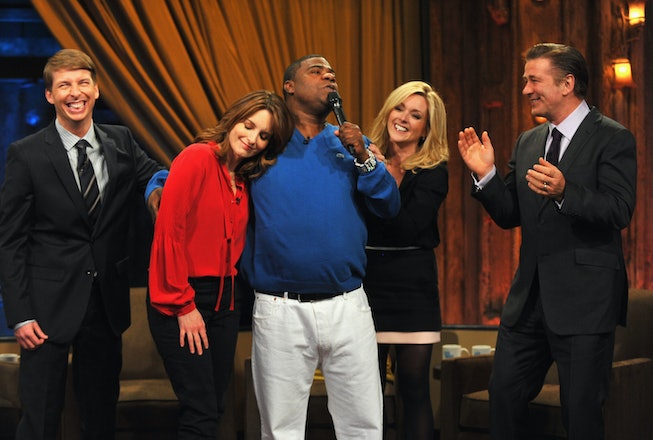 After the across-the-board success of the socially-distanced Parks and Recreation reunion special earlier this year, it was only a matter of time before NBC decided to do something similar with its other beloved female-led sitcom, 30 Rock. Which is why today's announcement that the multi-Emmy winning sitcom, which ran for seven seasons from 2006 to 2013, would return to our television screens for their own remotely-produced reunion episode comes as no surprise — but a delight, nonetheless.

Billed as “a first-of-its-kind all-audience upfront event,” the special will air Thursday, July 16th, at 8:00pm ET and will feature the the return of cast members like Tina Fey, Alec Baldwin, Tracy Morgan, Jane Krakowski, and Jack McBrayer, who will all appear in character in their beloved 30 Rock roles. Additionally, the special will feature guest appearances from talent across NBCUniversal networks, providing a sneak peek into “the stories and talent featured in NBCUniversal’s 2020-21 television season,” according to a statement from the network.

According to Variety, the special will air sans commercials and be double the length of a standard 30 Rock episode. (That's a full hour, for those of you who can't remember TV before streaming.) It will premiere first on NBC's namesake network before being rebroadcast on other NBCUniversal networks like USA, Bravo, E!, Oxygen, SYFY, and CNBC. The day after its premiere, it will be available to stream on the upcoming NBCUniversal streaming service Peacock, just two days after the service's official nationwide launch on July 15th.

In a joint statement, 30 Rock executive producer Robert Carlock and executive producer/star Tina Fey said, “We’re all happy to have this excuse to (remotely) work together again for NBC. To quote Kenneth the Page, there are only two things we love in this world: television and everyone.”

In a separate statement, Linda Yaccarino, NBCUniversal's Chairman of Advertising and Partnerships, said, “At NBCUniversal, we’re excited to produce an upfront that reflects a new reality and celebrates our relationship with viewers and advertisers alike. Historically, this event is about the future of programming; this year, it’s about the future of our industry — a future where we can meet audiences wherever they are, with the stories that move them.”

Our only question: Why would they not have this air on a Wednesday?