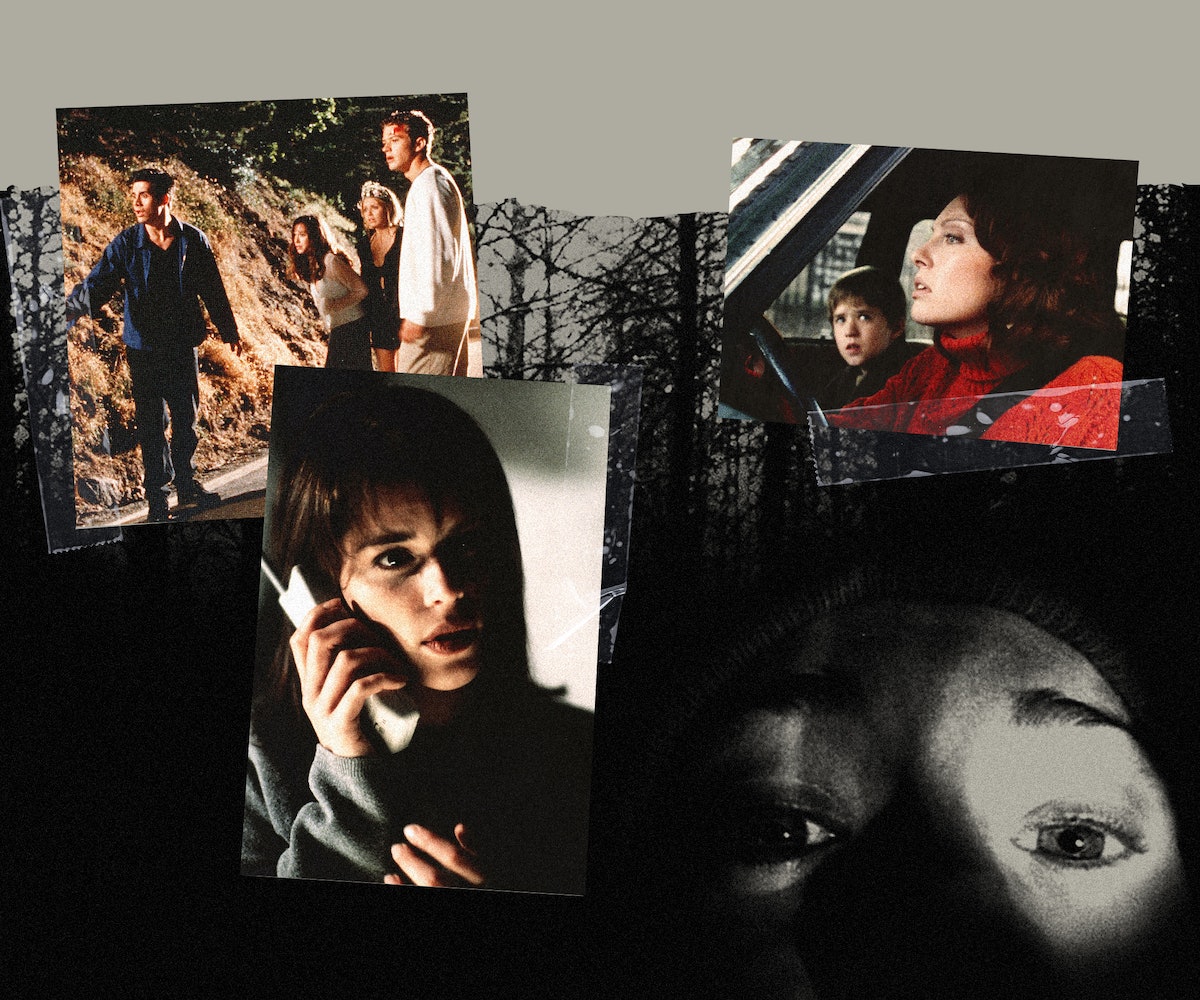 Growing up I spent much of my time watching horror movies with my dad. Together we’d grab a snack and park ourselves on the couch, ready to devour whatever scary nonsense was on the screen. Most of the time, this meant yelling at the TV when a group split up, or someone investigated a suspicious sound, or worse, stared directly at the camera — confused, and doomed — while the killer lingered quietly behind them.

Unbeknownst to me at the time, many of these now-classic moments were established in the 90s. This decade heavily focused on slasher-movies, which center around a group of people who are being hunted down by a knife wielding killer. They’re full of jump scares, vengeful origin stories, resourceful protagonists, and self-aware, witty, humor.

Though the genre was inspired by earlier classics like Halloween, and tested throughout the 90s, the format became popular when Scream was released. Set in an idyllic California suburb, Scream investigated what might happen if the characters grew up watching scary movies. Could they fight back and win, or would they succumb to the same misfortune? The film was an instant hit and turned into a franchise, with its fifth installment set to premiere on January 14th.

Ahead of Scream 5’s debut check out this list of the best 90’s slashers that also stand the test of time.

Do you like scary movies? If so, this one is a must see. Scream is a classic Hollywood slasher — directed by late horror movie legend, Wes Craven — that upended the industry with its self-aware writing, witty characters, and bone-chilling scares. The film follows Sidney Prescott and her friends as they’re hunted down by a ghost-faced killer. (Amazon Prime)

Candyman is a socially-aware horror film that questions who we find terrifying and why. Set in Chicago’s Cabrini Green housing projects, the film follows a skeptical grad student who learns about an urban legend haunting the community. When she takes it upon herself to unearth the truth behind the fable, she learns it may be more real and terrifying than she ever believed. (Peacock)

IT was adapted from the Stephen King novel of the same name. The film is about a group of neighborhood children who band-together to defeat Pennywise — a demon disguised as a murderous clown — after one of their siblings is killed. It’s also been described as a metaphor for the trauma of childhood — though few things seem more traumatic, frankly, than a murderous evil clown. (Hulu)

If you’re looking for a movie with a shocking plot-twist, the multi Academy Award-winning Silence of the Lambs is for you. In one of her most famous roles, Jodie Foster stars as Clarice Starling, a top-FBI trainee tasked with interviewing Dr. Hannibal Lecter (Anthony Hopkins), a psychiatrist in jail for cannibalism. Through their conversations, Starling hopes to gain information about an active serial killer, but soon learns she’s bitten off more than she can chew (pun intended). (Amazon Prime)

Deep Blue Sea is a sci-fi horror flick about a group of scientists searching working towards a cure for Alzheimers. The group descends into an underwater lab to conduct a series of experiments on sharks, but when one of their tests goes horribly wrong, they have to escape the facility before being eaten alive. (HBO Max, Netflix)

I Know What You Did Last Summer follows a group of teenagers — played by stars of the day Jennifer Love Hewitt, Freddie Prinze Jr, Sarah Michelle Gellar, and Ryan Phillipe — who dump a fisherman's body in the ocean after an accidental hit and run. A year later they’re hunted down by a mysterious hook-handed killer who knows of their sordid past. (Hulu, Amazon Prime)

Jacob's Ladder is psychological-thriller about a Vietnam War veteran named Jacob Singer, who loses his mind when he returns to America. Singer's girlfriend Jezzie (Elizabeth Peña), ex-wife Sarah (Patricia Kalember), and friend Louis (Danny Aiello) band together to help him reconnect with reality. However their efforts prove futile, as he’s consumed by disturbing hallucinations. (Netflix)

Misery follows Paul Sheldon, an author who has fallen ill, and is assigned an at-home-nurse named Annie Wilkes (played by Kathy Bates). Unbeknownst to him, Wilkes is a super-fan whose obsession takes a dark turn when she learns that Sheldon plans to kill one of her favorite characters in his next novel. (Hulu)

Wes Craven’s New Nightmare is a meta horror film where the Scream and Nightmare on Elm Street director plays himself. The movie follows his attempts to make a new horror movie starring Heather Langenkamp and Robert Englund. But when Langenkamp considers joining the cast, her son, Dylan, is haunted by Freddy Krueger. (HBO Max)

The Blair Witch Project was the first horror-movie to use hand-held footage as its storytelling technique, and cinema has never been the same since. The vlog-styled film follows three college students (Heather Donahue, Michael C. Williams, and Joshua Leonard) who trek into the woods hoping to spot the Blair Witch, a local town legend. Things take a grizzly turn when they get lost, and begin disappearing one by one. (Amazon Prime)

The Sixth Sense follows Cole Sear (Haley Joel Osment), a young-boy who is routinely haunted by ghosts. When he receives help from child psychologist Dr. Malcolm Crowe (Bruce Willis), the two are hopeful that his episodes will subside, but when they accidentally awaken a dark spirit both Sear and Crowe are exposed to something much more sinister, leading to one of the most famous lines in all of movie history, “I see dead people.” (Peacock, Amazon Prime)

Bride of Chucky is the fourth movie in the comedic Child’s Play franchise. In the previous film the murderous Chucky doll is cut apart by local police. But in this installment, Chucky is resurrected by his ex-girlfriend Tiffany — whose soul is later transferred into the bride doll — and they continue to terrorize Chicago together. (Hulu)

Wes Craven continued his reign on 90s horror with the film The People Under The Stairs, which follows a boy named Fool. When Fool breaks into his evil landlord's house, he discovers a group of mutilated boys held hostage under stairs. Horrified by his discovery, Fool then tries to escape with the landlord's daughter before getting caught. (Peacock)