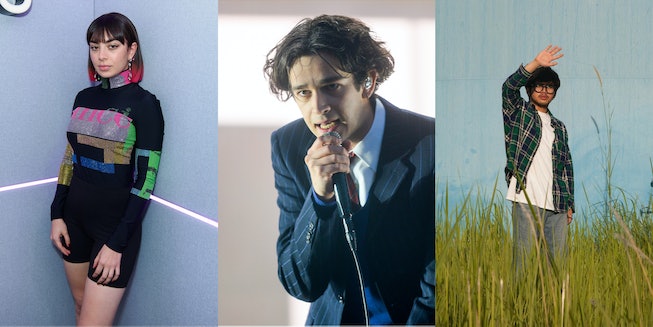 While supergroups aren't anything new, the last year of lockdown seems to have ushered in a golden era of artist collaborations. In the indie space alone, Jay Som and Palehound have introduced their new band, Bachelor; Japanese Breakfast's Michelle Zauner has released an EP as BUMPER with friend Ryan Galloway; and Clairo, Claud, and a crew of their friends have dropped a handful of songs under the bubbly pop outfit Shelly. Now, on the mainstream side, it seems a Charli XCX, The 1975, and No Rome supergroup is on the horizon.

The three artists will share their new song "Spinning" on March 4, they revealed on Monday. The "1999" singer first announced the project earlier that day via Twitter, writing that she's "v excited to be forming a supergroup with @no_rome and @the1975..." Though there's been no other official information released about the endeavor, the three artists have been teasing some sort of collaboration for some time now.

As NME points out, the London-based lo-fi musician No Rome revealed back in February that the three artists were working on a song together "coming out sooner than you think." Charli XCX responded back at the time, "sounding good boys." Meanwhile, The 1975 hasn't commented directly on the collaboration, however, frontman Matty Healy did let slip on Instagram back in January that he has indeed been working on new music with Charli XCX.

The three British acts have long been friends and, in the case of Charli XCX and The 1975, public admirers of each others' music. In 2019 in a string of tweets, Matty Healy called Charli a "f*cking force," and said, "I'm prolific but she's on some sh*t." No Rome and The 1975 are also both signed to record label Dirty Hit, and have collaborated before on their 2018 dreamy synth bop "Narcissist."

As for what to expect sound-wise, we're hoping it's boyband meets steely, hyper-pop production. Or as one fan on Twitter says: "This about to be the most beep boop sh*t ever and I cannot WAIT."

Editor's note: This article was updated at 1:25 p.m ET to include information about "Spinning."

This article was originally published on March 1, 2021