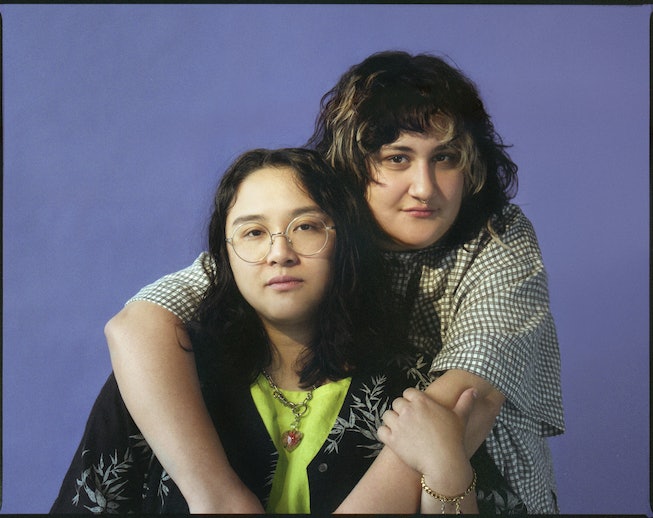 For many artists and musicians, quarantine has become a ripe opportunity for playful collaborations. In 2020 alone, Japanese Breakfast's Michelle Zauner and Crying's Ryan Galloway emerged with their new band, BUMPER, while Clairo, Claud, and a number of their friends introduced Shelly, a bubbly new pop project. Now, two beloved indie rockers (and best pals) Jay Som and Palehound have announced a new joint venture, Bachelor. They also share their first song, "Anything At All," a vibrant tune that they actually wrote, performed, and produced pre-quarantine during a brief break from touring.

"We're so excited to finally share this song with y'all and announce our new band," writes Jay Som's Melina Duterte and Palehound's Ellie Kempner in a joint press statement. "We've been dear friends and huge fans of each other for years and were lucky enough to get to work together in January 2020 before quarantine. We feel that 'Anything At All' is an even blend of our tastes and writing styles and to release it feels very hopeful and joyous to us."

The new track is a sparkling mix of both artist's distinctive sounds — though, to be fair, they were natural complements to begin with. Palehound's lo-fi folky rock intermingles with Duterte's jangly and intimate guitar pop on "Anything At All," a minimal, mid-tempo tune that lights up on the hook as they harmonize over clashing guitar, "I shoulda, shoulda, shoulda known she'd say anything at all."

While there's no word yet on whether a bigger project is on the horizon, let's hope this — and the many other newly-formed super bands — endure past lockdown.