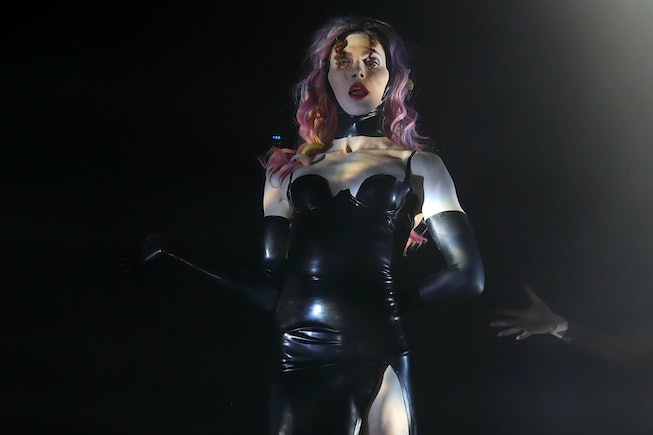 Nearly three months after the world learned of her untimely her death, SOPHIE’s life and legacy is still reverberating in the music sphere. Perhaps one of SOPHIE’s closest musical allies and friends, A. G. Cook, has now paid tribute to the late visionary producer in his own intimate way by penning a detailed note about the producer which he published online on Sunday.

The note, which lives on Cook’s own website and appears to have been written back in February, recounts the PC Music founder’s most vivid memories of SOPHIE, from their first email exchanges to their early collaborative efforts that birthed the PC Music record label, to keen and beautiful observations about the power of the pioneering pop she was making before she died. Cook’s writing — lucid, descriptive, and candid — offers a precious look into the often-shrouded and intimate world of the avant-producer, and is moving reflection of how her music impacted and inspired not only her fans but also her peers.

From the beginning, Cook details just how idiosyncratic SOPHIE was as a frighteningly talented producer even prior to her releasing her groundbreaking singles “BIPP” and “Lemonade.” On his first impressions of witnessing SOPHIE work in the studio, Cook writes:

“Part of my education consisted of just watching her build and re-build her music. I remember hearing a version of HARD that sounded great to me, but she felt it wasn’t gelling. Instead of tweaking or ‘fixing’ it in any way, she simply started again, remaking every sound, every drum, every synth part from scratch. I thought she had lost it at first, but I realised that she saw each component with such clarity that it was simply easier for her to remake everything than to force parts that didn’t truly fit together. There were certain pieces of equipment or software that she  enjoyed using, but she saw everything on a fundamental level, and had no problem taking one idea and recreating it with different tools. What was clearly the result of years of concentration and determination was by that point fairly effortless, and it was a pleasure to watch someone just turn their mind to music.”

In one of the more moving sections of the eulogy, Cook recounts the last time he saw SOPHIE in person, sometime before the pandemic at the The Bigg Chill yogurt shop in Los Angeles. He writes that her mind, ever speeding forward, was disenchanted with the current status quo of music streaming, and already onto other new ideas of how music can be shared and distributed more generously, and collaboratively — a glimpse into SOPHIE’s dreams of a better future for music.

“With a mix of self- aware hubris and total dedication, she sketched out this idea of an extremely generous platform that would give listeners all kind of access to stems, fragments, and revisions of her music,” Cook writes. “She believed that technology was wasting everyone’s time by attempting to emulate vinyl and radio, and that this infinitely generous approach was a logical endpoint for what music was always trying to be. She asked for my opinion. “Do you think it’s possible?”

Elsewhere in the piece, Cook describes SOPHIE’s relationships with other close collaborators like Charli XCX, whom he suggests was the perfect vocal complement to SOPHIE’s maximalist production style, gets into depth about her family life, and offers his ultimate thoughts about her music and legacy: “All of her music contains all of her.”

SOPHIE died on January 30, 2021 in Athens, Greece after a fatal fall from her apartment balcony. “True to her spirituality she had climbed up to watch the full moon and accidentally slipped and fell,” her family said of the incident in a statement.

There was an outpour of shock and grief from celebrity and fans as they remembered the late producer on social media; Charli XCX called SOPHIE “an amazing person who changed my life” in her own tribute. Since then, unreleased music from the late producer has slowly trickled forward through past collaborators and friends.

NEXT UP
Entertainment
Who Will Rihanna Bring To The Super Bowl?
Entertainment
The Meaning Behind Paramore's Disillusioned Anthem, "This Is Why"
Entertainment
Rina Sawayama's "Happier Than Ever" Cover Is A Must-Listen
Entertainment
Shania Twain's "Waking Up Dreaming" & 9 Other New Songs Out This Week