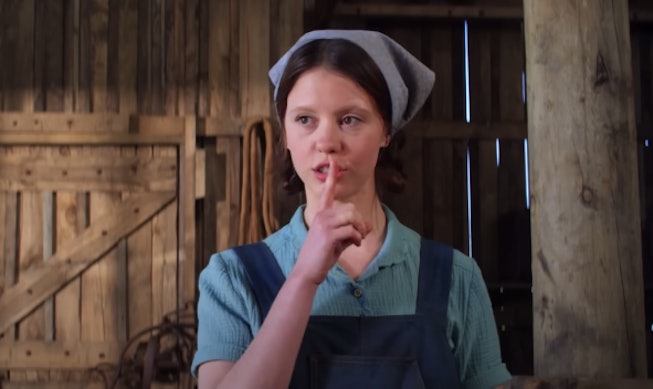 A24 made a prequel for hit slasher-comedy X, and it’s shaping up to be just as gory and twisted as the original. Pearl, the next installment from director Ti West, tells the murderous backstory of Pearl, the surprisingly dangerous farmer who terrorizes a group of adult film stars in the original movie.

While X functioned like a classic horror film in which all the characters have to try to survive the night (and, spoiler, most don’t), Pearl provides some additional context for what prompted the characters’ demise. Diving back into Pearl's tumultuous history, the trailer for the upcoming prequel gives a sneak peek at the makings of the murderer.

A24 released the teaser for Pearl this morning, and it stars Mia Goth once again, who played the elderly version of Pearl in X. In the opening scene, a young Pearl offers a desperate prayer. “Please Lord, make me the biggest star the world has ever known,” she pleads, “so that I’ll make it far away from this place.” The film is set in the same farm town in rural Texas, only this time, Pearl is living there as a young adult who’s tasked with taking care of her elderly family members. Though she’s working as an aid, she dreams of leaving Texas to become an entertainer and will stop at nothing to live the life that she wants.

As the trailer progresses, we watch Pearl's mind unravel as her inner demons take over. She goes from attacking innocent animals to humans, all while trying to pursue a glamorous career. “I want to be special, dancing up on the screen like the pretty girls in the pictures,” before admitting, “I want to be loved by as many people as possible. But truth is, I’m not really a good person.”

Pearl was co-written by West and Goth, who West asked to join the project’s creative team. X was filmed in New Zealand in early 2021, and the country required a two-week mandatory quarantine for all visitors. Pearl was written during that lockdown period, but they were not sure if the project would get picked up. “We didn’t know what was going to happen,” Goth said to LA Times. “We thought at the very least, if nothing comes of it, we’ll write the script and it can serve as a great backstory for Peal and my grasp on the character.” According to West, getting Pearl made was a shot in the dark. “My plan was to write it there and see if I can convince A24 that we should make two movies,” he said.

Luckily, after pitching Pearl to A24, the production studio greenlit the project and they began filming it in secret. Now merely four months after X was released, the story’s gruesome prequel is ready to hit theaters. Pearl is slated to premiere on September 16th. Until then, check out the film’s bone-chilling trailer below.