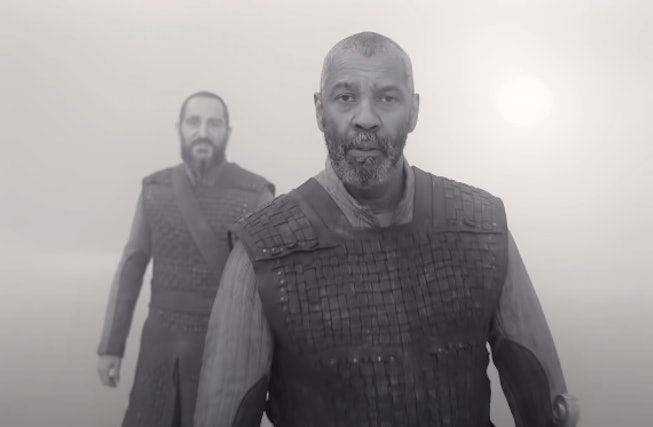 William Shakespeare’s beloved Macbeth has gotten the Hollywood treatment time and time again, spinning off innumerable adaptations. And though some of these were superb (I’m looking at you, Orson Welles), none of these past adaptations will be able to stand a candle to A24 and Apple’s upcoming rendition, The Tragedy of Macbeth. Sure, I have yet to see the film. But I’m confident in saying that because none of those previous versions counted two-time Oscar winner Denzel Washington as the titular Lord or three-time Oscar winner Frances McDormand as his calculating wife, Lady Macbeth. So, yes. This latest adaptation will be the play’s best.

This morning, A24 and Apple TV+ dropped the first trailer for the highly-anticipated film. In actuality, the teaser is just 30 seconds of Washington, McDormand, and other actors marching non-determinedly around a black-and-white square-screen — plus, one voiceover’d muttering of the play’s famous line, “By the pricking of my thumbs, something wicked this way comes” — but even with only that, it’s already one of the best things I’ve seen all year. (No wonder awards pundits have already started slating the film’s major stars onto its prediction lists, sight unseen.)

Adapted for the screen and directed by Joel Coen (one-half of the multi-Oscar-winning writer-director duo The Coen Brothers — though here, he worked alone), this latest adaptation is described in a press release as a “tale of murder, madness, ambition, and wrathful cunning.” Judging by this admittedly barebones first peek, it’s not hard to trust that Coel’s “bold and fierce adaptation” will indeed live up to the hype.

Though The Tragedy of Macbeth won’t hit theaters nationwide until the tail-end of this already-too-long year, the guaranteed future awards player will receive its world premiere later this week, on Friday, when it debuts as part of the 59th Annual New York Film Festival.

Watch the teaser below. The Tragedy of Macbeth hits US theaters on Christmas Day before streaming exclusively on Apple TV+ starting January 14.