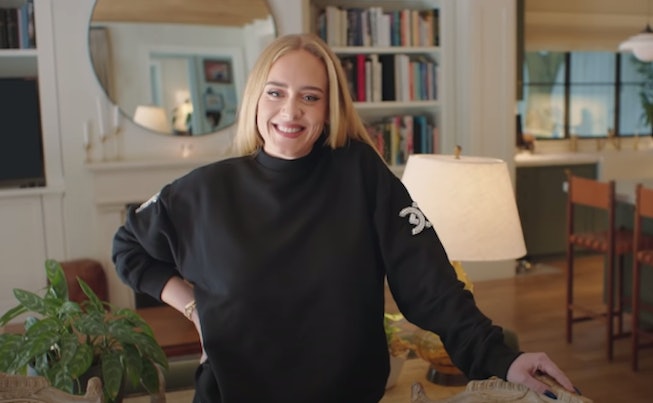 In the lead up to her highly anticipated fourth studio album, Adele welcomed Vogue into her Los Angeles home for the publication’s traditional “73 Questions” video segment. The singer ended up doing 95 questions in the end, commenting on everything from her favorite prince (Harry) to her favorite Beyoncé album. Like many people with taste, Adele is a noted and lifelong Beyoncé stan — and she infamously broke her 2017 Album of The Year Grammy in half, saying Bey was more deserving for her magnum opus, Lemonade.

"I'm very humbled and I'm very grateful, but Beyoncé is the artist of my life,” Adele said at the time.

In her Vogue video, Adele was tasked with naming her top three Beyoncé albums, and was rightly concerned about offending the Bey Hive. But her answers were surprising for even the most hardcore of fans. “My first one is Sasha Fierce, that sublime double album,” Adele says in the video. “The second one would be Lemonade. The third one is a bit of a toss up between the two, but I’m going to go with my heart and my gut and say B’Day.”

Of all of Beyoncé’s albums to choose from, I Am...Sasha Fierce as #1 is an interesting choice, and certainly an unusual one. From Adele’s perspective as a vocalist, though, it makes sense. In a 2011 interview with Billboard, Beyoncé described Sasha Fierce as a double album, saying, "One side has songs that are more mainstream and another has my more traditional R&B songs for my fans who've been there the whole time. Some of it sounds like Barbra Streisand, Karen Carpenter and The Beatles around the 1970s."

The influences Beyoncé describes are all present in Adele’s music — later in the Vogue interview, Adele even goes on to say she would love for Streisand to cover one of her songs.

The rest of the interview includes a few other fun tidbits — at one point, Adele shows the camera a framed piece of Celine Dion’s chewing gum, which fellow Brit James Corden gave to Adele as a gag gift, knowing she worships Dion. She notes Leonard Cohen as her favorite lyricist, Cate Blanchett as her style icon, and ranks the Spice Girls over the Beatles. The “Skyfall” singer also shared her pick for the next James Bond, if it’s not Idris Elba: Jonathan Majors. Taste, all around.