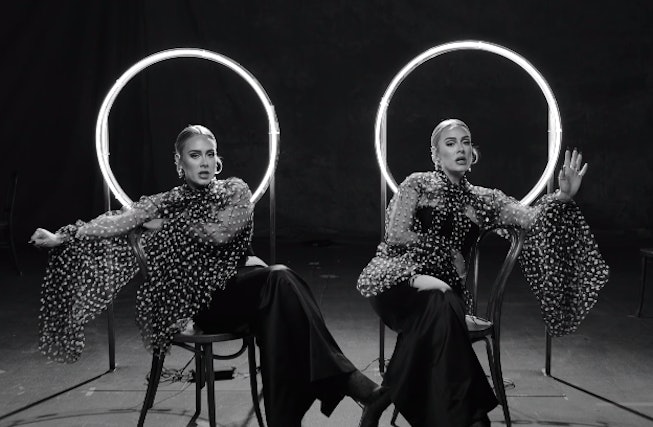 Adele’s latest music video “Oh My God,” marks a new era for the artist — one that’s far more vulnerable, messy, and free than we’ve ever seen. The spiraling track comes from her latest album, 30, and describes the singer's struggle to put herself first following divorce.

Through religious imagery, interpretive dance, and a whole lot of outfit changes, the stunning visual for “Oh My God,” takes its viewers on a winding journey. The video opens with a shot of an apple on a chair — a possible nod to the Adam and Eve origin story — before we see Adele sitting elsewhere. In a sheer spotted shirt and satin pants she sings, “I ain’t got too much time to spare / But I’ll make time for you to show how much I care.”

The music video, shot in black and white, then pans through a warehouse full of dancers. While they express the song through movement, Adele observes the chaos. “Oh my God, I can’t believe it / Out of all the people in the world / What is the likelihood of jumping / Out of my life and into your arms,” she sings in the chorus.

As she continues to work through her emotions, we see the signer accompanied by more religious imagery including a snake and pope-inspired outfit. Towards the end of the video the chair from the first shot is set on fire, as she sings, “Maybe, baby I’m just losing my mind / Cause this is trouble, but it feels right / Teetering on the edge of Heaven and Hell / It’s a battle that I cannot fight.”

The video concludes with a party scene as the lyrics, “I know that it’s wrong but I want to have fun,” play in the background. Before fading to black the last image we see is of Adele biting into the apple, a symbol that her choice has been made.

Following the video's release, the singer posted a clip on Instagram and thanked her creative team. “Go to work with Sam Brown again for ‘Oh My God’ who directed the ‘Rolling In The Deep’ video! So to collaborate together again a decade later was nostalgic to say the least.” she wrote. “We filmed this on the day ‘Easy On Me’ dropped,” she continued. “There were a million things going on all at once. But the attention to detail from the crew was borderline hilarious — thank you so much for your patience and pulling it all together, it was a lot of fun.”

She added, "Although right at the end a huge python was on set so I skidaddled my arse straight out of there! Big thank you to Harris Reed, Louis Vuitton and The Queens Haus - Vivienne Westwood for the most stunning clothes for me to sing my 'I'm a hot mess' song in!”

In the hours following its premiere the video has racked up over 11 million views. Though much is up to interpretation, it’s clear Adele’s not hiding anymore. See for yourself, below.