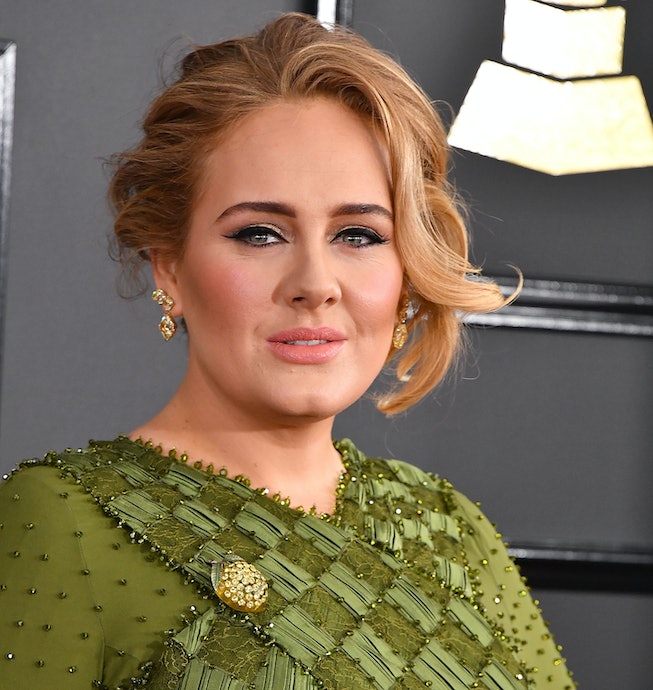 Along with crafting devastatingly relatable lyrics, Adele is also skilled in the art of transparency. The Grammy-winning singer recently spoke with The Face about her experience becoming a mother, battling postpartum depression, and maintaining her sense of self.

Adele gave birth to her son Angelo in 2012, when she was 24. The “Someone Like You” singer was in a relationship with Angelo's father, Simon Konecki at the time, though the couple has since split. Four years after his birth, Adele won a Grammy for Album Of The Year, and referenced her struggle to grapple with motherhood in her acceptance speech. “In my pregnancy and through becoming a mother, I lost a lot myself, and I’ve struggled,” she said. “I still do struggle being a mom — it’s really hard. But tonight, winning this kinda feels full circle and like a bit of me has come back to myself.”

The Face reporter Candice Carty-Williams referenced that moment and asked the singer if she’d found herself since. “There are definitely a few elements of myself that I don’t think I’ll ever get back,” Adele responded. She went on to explain that becoming a mother meant putting herself second. “More than anything,” she said, “it’s the freedom of being able to do whatever you want, whenever you want. Going somewhere and not having to prioritize someone else. Whereas my number one priority with everything I do since I had Angelo, which is in life, in work, is obviously my son.”

Adele also revealed she struggled with depression while Angelo was a baby. “Giving, giving, giving, to a baby or a toddler, when they can’t even fucking talk to you, your brain goes a bit mushy,” she explained. “You’re not stimulated very much. In that, I also got really quite bad postpartum depression, or postnatal as we call it.”

The singer went on to note that her struggle was rooted in the immense pressure to be a good parent. “No one wants to be like their own parents, no matter how great (of) parents they were or not,” she said. “You learn how to be a parent on the go. Or you start reading books, and that’s not right either, because it’s someone else’s experience of it and they’re all completely different.”

Adele further explained that motherhood got easier with time. As Angelo grew u,p she was able to further connect and establish their unbreakable bond. She’s described her son as “brilliant” and “a comedian” on numerous occasions, and claims he’s a great conversationalist. “He’s about to turn nine and he’s getting to the point now where he’s got opinions. It’s fucking fun,” she said.

The singer's latest album 30 — which drops on November 19th — is dedicated to Angelo, and is meant to explain why she chose to divorce his father. In a recent profile with British Vogue she said, “I just felt like I wanted to explain to him, through this record, when he’s in his twenties or thirties, who I am and why I voluntarily chose to dismantle his entire life in the pursuit of my own happiness. “It made him really unhappy sometimes,” she continued, “and that’s a real wound for me that I don’t know if I’ll ever be able to heal.”