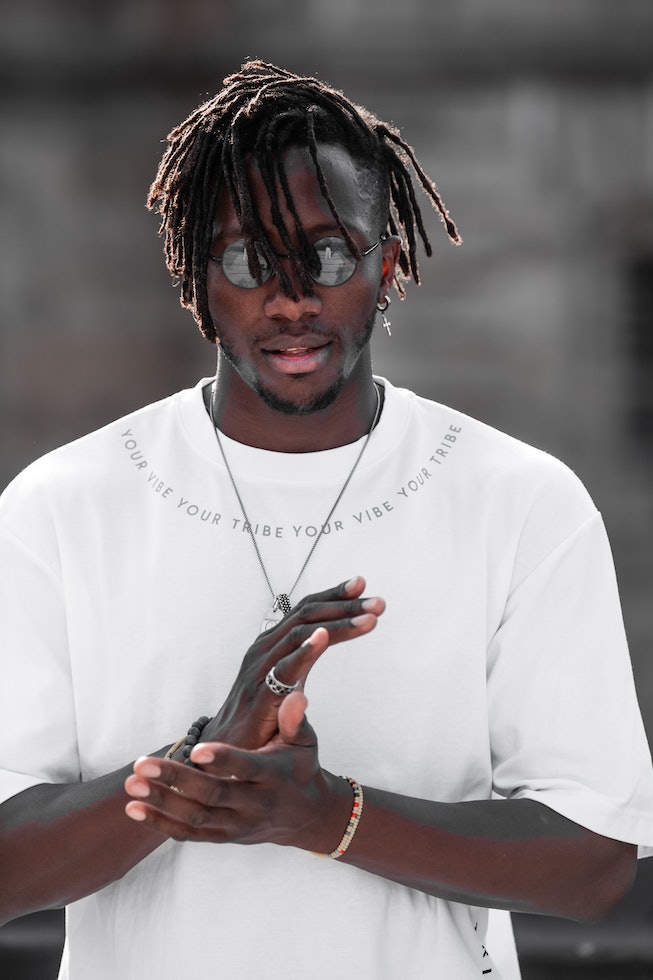 Some people know exactly what they want to be when they grow up, but Hubert Ameme Sodoganji (known professionally as AMÉMÉ) did not. Born and raised in Benin, West Africa, the now-successful DJ tried a myriad of professions before finding his calling.

“Back then I wasn’t thinking ‘I’ve always wanted to be a DJ,’” he tells NYLON over Zoom. “But growing up my mom was always telling me, ‘yo finish school and I’ll pay for classes.’” Despite his budding fascination with music composition and good grades, she didn’t hold up her end of the deal. “Obviously, she never did,” he recalls.

Following his mother’s advice, AMÉMÉ focused on academics. After dabbling in finance and moving to New York to study pre-med, he realized he wasn’t the right fit for either. While trying out new jobs, Sodoganji continued to foster his love for music on the side by teaching himself how to mix songs and curate DJ sets. Eventually, he gave into his passion and decided to pursue it full time — with one stipulation. Instead of solely being an entertainer, he would utilize his education to launch a music label as well. “I knew that if I told my mom, ‘Hey, I’m going to be a DJ,’ she was going to be like, ‘what else,’” he jokes. “My business mind started to kick in. Then the rest is history.”

Now, AMÉMÉ is headlining sets at some of the biggest venues around the world, while producing music through his company One Tribe. Most recently he stopped by NYLON’s Art Basel party in Miami, Florida, and entertained the crowd with his signature jungle-tech sound.

Following his set, the DJ chatted with NYLON about his five year plan, the artist he can’t stop listening to, and the wildest gig he’s ever played. Read all about it, below.

Congratulations on your set at the Nylon Art Basel Party! How’d it go?

I didn't know exactly what to expect because it was an industry party. I knew that I had to create a vibe and allow people to come in, chat, be able to talk, then bring the energy back up and have them have a good time. But in the end, it was fantastic.

Where do you typically perform?

For the last couple of months we've been focusing on festivals, major gigs, club gigs. Because it was Art Basel, and we were going to be there for a whole week, we figured it would make sense to do a little bit of mixing, and be exposed to other people that might not necessarily come to the club.

I’d say Space Miami. I literally just played at Space. You have some of the biggest DJs in the world that come and play at Space. Usually each party goes on for a good 20 hours. The one thing about Space, if you've never been, [is that] the roof is transparent. So whenever the sun comes out, the room turns from dark to light.

I think the longest set I've done was 9 hours. That was in Tulum.

How’d you manage to keep the crowd entertained?

For us DJs playing is not just press and pause, and doing one track after the other. It's a whole conversation between us and the crowd, because we are literally crafting a vibe and delivering it. If the energy is going high all the time, at some point, if you understand the chemistry of the music, you understand that you’re going to have to decrease the vibe. Then you take it back on again. It’s just that rollercoaster, that emotional rollercoaster, that, for me, makes an amazing set. Doesn’t matter if it’s for 8 hours, for 9, 10, or 16 hours — though I’ve never done that yet.

Do you want to perform longer sets in the future?

I would like to try because, honestly, my music and my DJ sets have such a wide range. A lot of people categorize me as an Afro House DJ because I use a lot of African percussion, vocals, and elements in my music. My music is definitely a reflection of who I am and where I've actually lived: Africa, Berlin, and America.

How would you define your music-style?

I always say if I want to define my style it’s the percussion from Benin, West Africa, and the diversity of range from New York. I think New York is such a unique place. New York is the only place in the world where you grow up learning how to adapt and have a range.

I see myself being one of the pioneers of African electronic music, and having my label being highly recognized with some hit songs and projects. But also finding a very consistent way to positively impact society with what I do.

Is there a song that you've noticed people have really vibed with this year?

I think “Patchido” is definitely very catchy to people. The whole idea of the song was sustainability. “Patchido,” actually the main vocal of the song, comes from my culture. It’s a traditional chant that people sing everywhere. But it’s the whole idea of sustainability and how you should fix things, versus just throwing them away. It has such a beautiful melody and I made it really percussive and a very groovy, daytime, pool vibe. People just love it.

Are there any new artists that you're excited about right now?

Channel Tres is this guy from Compton that does a mix of electronic music. I know that he raps into his stuff and he's doing some really cool things. He's definitely a very interesting artist to watch.

What are you listening to on repeat right now?

I listen to Rüfüs Du Sol a lot because it’s melodic. It’s groovy. I’m always looking for electronic music and stuff, but sometimes I just need to cool off for a little bit and get some good vibes and energy around me.