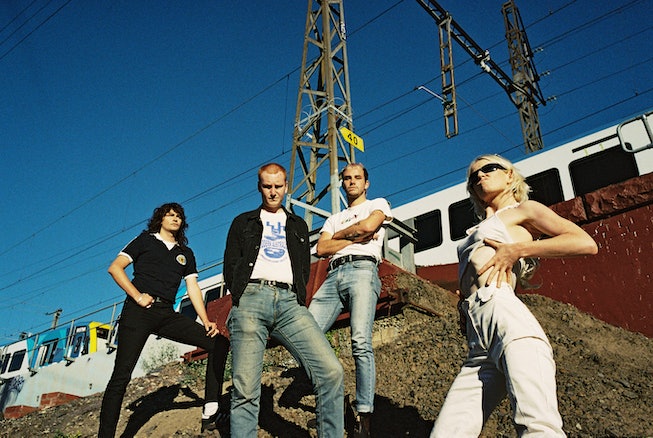 One must be ready for anything at an Amyl & the Sniffers show. Swarming? Definitely. Headbanging? Constant and continuous. Crowd surfing? Likely. Moshing? Is that even a question?

In the six years since Amyl & The Sniffers debuted, the Melbourne-based four-piece have rapidly ascended as one of the most fun touring bands in the world. The punk-rock group’s lively shows — which have taken them from a word-of-mouth secret to playing national stages like Late Night with Seth Meyers — largely hinge on charismatic frontwoman Amy Taylor (identifiable by her bleach-blonde mullet and toothy grin), who at the pulpit growls, jumps, and goes so hard sometimes blood gets involved. Their music is just as intense, spiky waves of thrashing pub-rock that feels like a revival of that unwieldy ‘70s punk spirit. It can make one do wild things: At the band’s May 19 show at Brooklyn Steel in New York, in support of their new album Comfort To Me, a fan from the audience crowd-surfed to the front of the stage only to get picked up by security, all while the band hammered out their biggest hit, “Hertz.”

Hours before that gig, though, in the Brooklyn Steel greenroom, the band is chilled out and mellow — nonchalant even — dressed in the same plain tees and jeans they’d wear on stage later (though Amy will change into a bikini top and spandex shorts). Members Bryce Wilson, Gus Romer, and Declan Martens sip green juices and Yerba Mates, while Amy putters around in a hot pink knitted two-piece, gifted to her by a fan from a recent show. The tables are cluttered with the eclectic items from their rider: vodka, Moët & Chandon, oranges, Fritos — and the biggest thing on their mind right now is where to get some food. It’s a slightly disorienting scene to those used to the image they pull off on stage, but it’s just another day at work for them. Chatting about touring, the best city they’ve played, their pre-show routine, and more — Amyl & The Sniffers just might be the chillest punk band out right now.

Bryce: Everyone's been pretty crazy. Everyone's singing the words to our songs, which is pretty cool. Lot of good energies and stuff.

Amy: It's fun. Everyone has been fun as fuck. People have been bringing little stuff as well, like little notes and little... Someone crocheted this and stuff and chucked it to me. Very welcoming. Trying to show us good food spots and stuff.

Comparatively, in rowdiness, how has it been?

What’s your pre-show routine like? How do you guys prep for the show?

Bryce: I don't feel like we really have one... have a stretch.

What's always on the rider?

Amy: Well, at the moment, it's just two bottles of vodka, heaps of beer. I got into the twisted teas. I really like them.

Bryce: Those Mai Tais are pretty lit as well.

Amy: Our two managers been drinking the Jagermeister or whatever they're called. We get coffee because, yum. Lots of water and fruit, so we can have breakfast the next day. It's pretty normal.

Got to keep it healthy.

Amy: We try. Yeah. But we don't ever eat it. It just ends up sitting there for like weeks. And then it's you know... we are where fruit comes to die.

How long did it take for you to really pinpoint your energy that you want to bring on stage?

Amy: I didn't really think about it. When the boys would play that kind of music, they kind of dance and would come out or whatever. So it wasn't really like a considered decision to pinpoint an energy release, but more so just a natural [thing].

Do you model your live performance persona after anyone, or is there anyone that you particularly look up to?

Amy: I'm influenced by a big range of people, but also just try not to... It's easy when you respect somebody to try and mimic what they do, but I like to just like be influenced by things that are outside of my spectrum or whatever.

On Instagram, there was like a photo of you with blood in your mouth during a show. Is that part of the set?

Amy: Oh, no. No. I hate that stuff with fake blood and stuff. I was just stage diving and I guess the mic must have busted of my lip.

What's the funnest city that you all have played?

Bryce: Austin, for me.

Amy: We had a couple of days there, and it was hot, and a man chucked us in the back of their truck and we just drove to this ranch.

What do you mean a man chucked you all in the back?

Amy: Like we just jumped in to, I don't know what you call it, like a pickup truck, I guess. We just like jumped in the back of there, and drove back to this ranch, and shot guns, and drank Twisted Teas, and went swimming in the river, and there was snakes and stuff. We were like, yeppers. It was rowdy.

Declan: A lot like Australia in a lot of ways.

Amy: They were all welcoming and sweet and fun and stuff and up for a good time. So it was nice. Lots of daytime activities, I think, was the fun part.

Online, you guys are described by a lot of people as punk and channeling punk aesthetics. But talking to you guys, it seems really relaxed.

Amy: There's like versions of punk, as in punk is an aesthetic, but also it's like punk is a spirit, and then punk is like extreme activism. So there's a like a full spectrum punk. It's like some people, it is just an aesthetic. But in the end, that's fashion. And then there's punk, the genre, which is just music. And there's punk as in anti-society and anarchist, so there's different versions and different pockets, as in we make the genre punk. But we're not by no means... We try to be as activism as we can, but it's like there's so many different versions.

“Even in the most simplest form, we just love to rock.”

There’s a big punk revival in pop culture right now. Do you guys have any feelings of ownership to the label?

Amy: Not particularly, because as well, we love rock music. We love pub music. We just like rocking out. Even in the most simplest form, we just love to rock. So we just love music, and making music, and that kind of thing. In terms of punk revival, I think it's aesthetically being revived. I think sonically it'll get dragged along with the aesthetic becoming more popular, which is a good thing, because it's a great genre. It also can be a gateway to activism. There was punk music I listened to when I was 16, and now I'm an adult. I'm listening to the lyrics and going, oh fuck. They're actually saying some really smart, empathetic shit. So it can be the gateway to broader thinking, even if it just starts with, I don't know, a tokenistic band.

Is that something that you want your guys' music to stand for?

Amy: I don't particularly think so. I think people will interpret it as they need to. And I don't feel self righteous enough to put anything particularly next to my name at this point in time. But I would like to represent strong female characters, and not necessarily confidence, but just the ability to be comfortable with who you are. But at the same time, that's super individualistic. So I don't even know if that's... I feel like there's a big movement within bands being like, be yourself, everything fucking love, but it's more like, what does that actually achieve in society except for you feeling good about yourself? What do you think about everybody else? You know what I mean? But I think having self-esteem and not hating yourself is a good thing. Life's complicated. There's lots of nuances floating around constantly. But I guess everything's so nuanced, it's like how can I commit to one thing at this point in time?

You guys have a new record out. Has there been a song that you guys have noticed that's been resonating with the crowd when you all play?

Declan: I think a lot of people like "Knifey". Maybe because it's a bit softer I can hear the audience a bit better. So I know they're all resonating when people... But "Knifey" seems to get a big cheer and so does "Hertz" as well. That's the pop song. So people like "Hertz". Always at the end of the setlist.

When moment in the set do you guys really enjoy?

Gus: The end of it. The last song.

Declan: The last song is fun. That's nice, because you're just like, goodbye. You get to like play it out a bit more, you know what I mean?

Bryce: If you got any energy left, that's when you let it all out. Then, because that's your last chance to.

What do you all hope the crowd or your fans take home from your show?

Bryce: That helps too.

Gus: No, I think hopefully that someone can be inspired to be a musician, or someone can be like, “That's the best night of my life,” but not end up remembering it the next day as well. Just a good time. I feel bad for ripping people off. We might be if they're buying T-shirts.

Amy: I think good times are so few and far in between, so live music's such a good space for you to just like sweat it out and be like, “fuck yeah.”

Amyl & The Sniffers’ Comfort To Me is out now via ATO RECORDS / ROUGH TRADE.