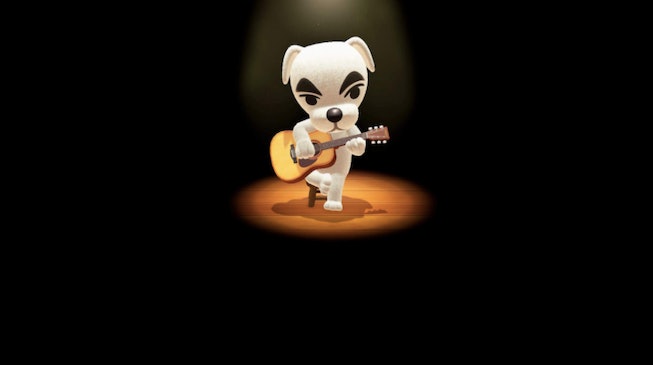 Animal Crossing: New Horizons is a creativity powerhouse. Through the Nintendo Switch game, users can landscape their once deserted island into their own version of paradise, recreate designer threads at no cost, and interior decorate their home into a masterpiece worthy of a coveted Architectural Digest feature. The Animal Crossing community is robust, and not one to keep their magnetic creativity within the confines of the game. The latest burst from the fandom is stars K.K. Slider — the game's indie music heartthrob and guitar-wielding Jack Russell Terrier — posing his way across popular album covers, and it's a sight to behold.

K.K. Slider has long been the symbol of the intersection of Animal Crossing and music. Dozens of his covers can be found on YouTube, and his musical prowess can rarely be bound to a single genre. Pop, indie, hip-hop — K.K. Slider masters them all. Knowing the power and sheer fortitude of the Animal Crossing fandom, it's only a matter of time until the fan-created album covers below get their own crooning canine cover song.

How do you say "She thinks you love the beach, you're such a damn liar" in Animalese?

Mitski - Be The Cowboy

Mitski and K.K. Slider: Two indie heavyweights with hearts of gold. Grab the Kleenex for this one.

Neutral Milk Hotel - In the Aeroplane Over the Sea

Frank Ocean and K.K. Slider are cut from the same cloth. Both are introspective, mysterious, with a bit of a rebellious streak. Their main difference is that K.K. Slider loves to perform and Ocean would rather drop dead.

My Chemical Romance - The Black Parade

K.K. Slider might be a guitarist at his core, but clanging pots and pans and other avant-garde percussions are not out of his wheelhouse.

One of the best albums of all time, in this reality and in the Animal Crossing universe.