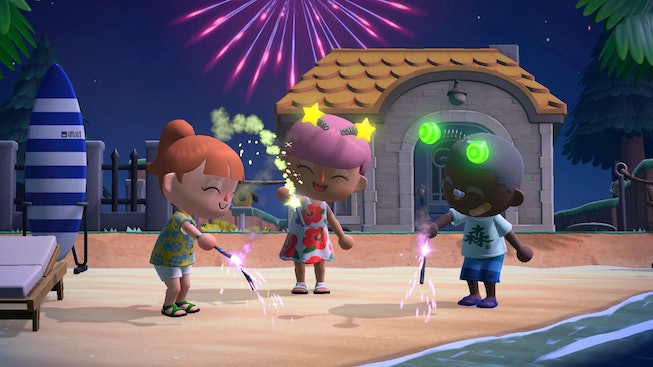 If you've run out of excuses to visit Blathers in the morning, a summer update for Animal Crossing: New Horizons has you covered. Prepare to explore a whole new part of your flower-filled island, because two new updates for the very popular Switch game come with a chance to swim and light up your skies.

Announced on Thursday, June 25, Nintendo confirmed two waves of free updates are headed for the game, with the first dropping on July 3, and the second arriving on July 30. An additional fall-inspired update will be announced later this year.

For the newest update, announced on Tuesday, July 28, players can now attend weekly firework shows and travel through dreams to visit other islands. Nintendo Switch online players also now have the ability to backup and restore your island.

The previous update, unveiled earlier in June, included the opening of your island's oceans.The clip featured swimming, diving, and a cannonball as just some of the many activities you can enjoy. Along with the addition of swimming comes new sea animals to discover, and the sneak peek includes securing a starfish that Blathers is more than happy to take for the museum.

If water sports aren't your thing, there's plenty of other newness to explore, including the addition of some fresh faces like Pascal, a beanie-wearing bear, and Gulliver, but this time he's talking and dressed like a pirate. And while you'll definitely want to take some time to get to know the new locals, there's also a batch of DIY recipes to add to your collection, including an entire collection of mermaid-inspired home decor.

Prepare to spend the rest of your summer in a virtual ocean, and get to know the new updates, below.