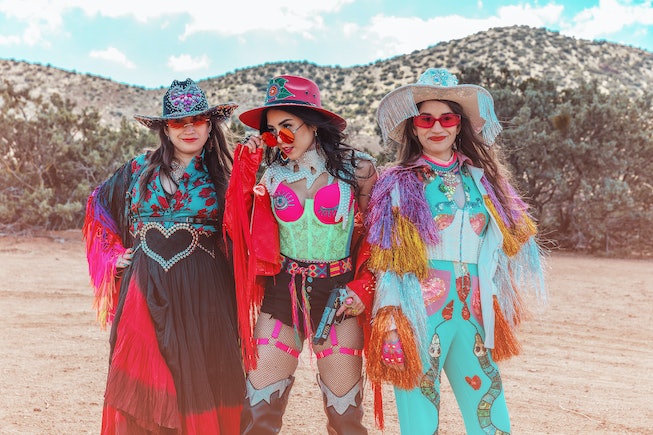 Anna Akana is a woman on the run in the new video for her song “Wanted Woman (feat. Macedo).” The straight-talking track is all about holding onto your power while navigating romantic waters.

Directed by Maggie Levin — who also helmed My Valentine and screenwriter of the upcoming Labyrinth reboot, the video features Akana and twin sister duo, Macedo on an adventure through cowboy country.

"I found the song so unabashedly sexy and fun from the very first listen, and knew in my gut that underlining the lyrical concept (in rhinestones and fringe) was the only way to go,” Levin says. “It was a real joy to to build this flamboyant, maximalist Wild West-world together with Anna, Macedo and the entire creative team. If the video looks like a party, that’s because it was."

Akana — whose also known for her popular YouTube channel and acting career (soon she’ll star in Demi Lovato’s NBC comedy Hungry), released her debut album, Casualty in 2019. The emotionally raw record charted Akana’s journey through life, as well as a recent end to a toxic relationship. The follow up, No Longer Yours, comes with the clarity of a year of sobriety.

"This EP is about the process of assembling the broken pieces and stitching them back together,” Akana says about the 6-song EP. “It’s about the moment you finally see the person who used to make you nauseous and realize it doesn’t sting so much anymore. I had so much clarity about the things that weren’t working for me, what I had to let go of, and how I wanted to shape my life moving forward with more self-awareness about what was within my grasp to change."

Watch the video for “Wanted Woman (feat. Macedo)” below: