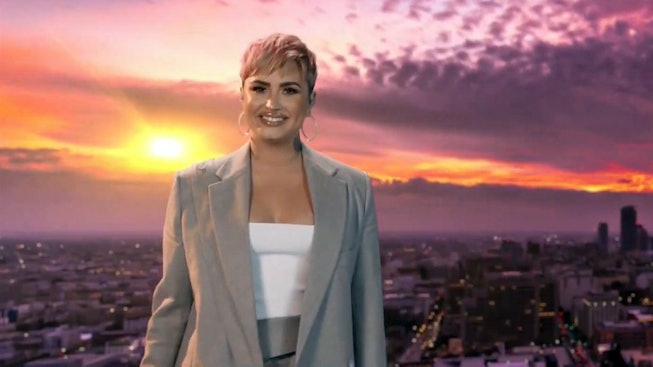 Former NYLON cover star Demi Lovato has always been open about her struggles with food and eating disorders, and recently, she's become a huge outspoken advocate for body positivity. Just last year, she opened up to Ellen Degeneres about the way she felt "controlled" by members of her team while in the throes of her eating disorder and then released a self-love anthem about learning to appreciate her body (titled, of course, "I Love Me") as she gradually went through recovery. (Later this year, she'll go into even greater depth about these issues in her upcoming YouTube docuseries, Demi Lovato: Dancing With The Devil, which is set to open SXSW in March.)

So, of course, the Grammy-nominated singer and Teen Choice Award-winning actress (never forget about Sonny With a Chance) feels like the perfect fit to star in Hungry, an upcoming NBC comedy that follows a group of people enrolled in a food issues support group.

According to The Hollywood Reporter, the new show, a single-camera comedy from Universal Studio Group's Universal TV, will follow "a group of friends who belong to a food issues group and help each other as they look for love, success and that one thing in the refrigerator that will make it all better." The show hails from the mind of Suzanne Martin, the multi-Emmy winner behind beloved classic sitcoms like Will & Grace, Frasier, Ellen, and Hot In Cleveland. In addition to starring, Lovato will act as one of several executive producers, including Scooter Braun.

Though the comedy has yet to receive a full-season order, NBC has already committed to the yet-to-be-filmed pilot — meaning, if the network ultimately decides not to air the show when all is said and done, it will face a penalty. So, that certainly seems promising! I, for one, can't wait.