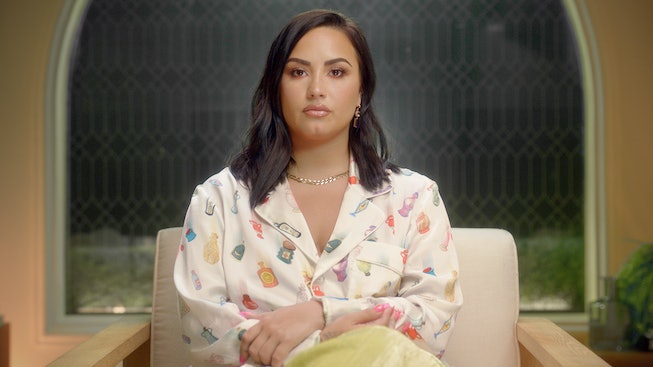 Demi Lovato is facing her demons head on in the upcoming YouTube docuseries, Demi Lovato: Dancing With the Devil. The four-episode deep dive focuses on the harrowing events of 2018 that led to Lovato's near-fatal drug overdose, and its aftermath.

“It’s been two years since I came face-to-face with the darkest point in my life, and now I’m ready to share my story with the world,” Lovato said in a statement. “For the first time, you’ll be able to see my chronicle of struggle and ongoing healing from my point of view. I’m grateful that I was able to take this journey to face my past head-on and finally share it with the world.”

Beginning with Lovato's 2018 during Lovato’s Tell Me You Love Me World Tour, the Michael D. Ratner-directed series promises an honest look at the singer's traumas and her journey toward physical, emotional, and mental health. The first two episodes of Dancing With The Devil premiere on March 23 on Lovato's YouTube channel, and the following two episodes will roll out weekly over the next two Tuesdays.

Ratner praised Lovato's candidness with her pain: “Demi’s willingness to explore the darkest elements of her life is going to leave the audience with a complete understanding of everything she’s been through and ultimately where she is going. Demi stands for empowerment, and this documentary is going to answer the many questions that have been out there — providing a real window into the life of one of the biggest stars in the world, who is simply a human being.”

Lovato's openness with her fans concerning her addiction and recovery has now become a core tenet of her celebrity. She's sang about relapsing and learning to have compassion for herself in "Sober" and "I Love Me," respectively, and opened up on The Ellen DeGeneres Show about battling an eating disorder amid a controlling management team.

NEXT UP
Life
Cara Delevigne Is Getting Her Own Sex Docuseries
Entertainment
Timothée Chalamet & Taylor Russell Star In Intense First Teaser For 'Bones & All'
Life
8 Murder Mysteries To Stream After You Watch Bodies Bodies Bodies
Life
All Hail Ekin-Su, Love Island’s Most Legendary Bombshell