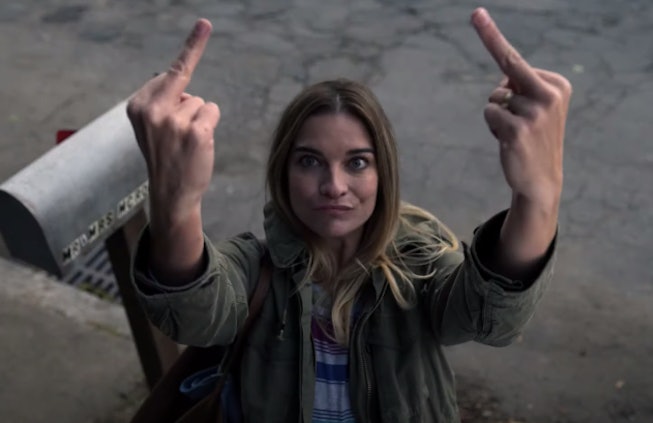 Annie Murphy's first role following Schitt's Creek is just a bit different from her Emmy-winning performance as the ditzy-but-determined Alexis Rose on the now-beloved Canadian comedy. In a trailer for "Kevin Can F**k Himself," a new AMC dramedy executive produced by Rashida Jones, Murphy stars as a sitcom wife on autopilot who suddenly wakes up to her reality and decides to change it, possibly with murder.

The show's dark humor is a turn from Schitt's Creek's sugar-sweet levity, and as evidenced by the trailer, the series breaks multiple fourth walls as it follows the interior life of an otherwise robotic and scripted sitcom character. The show switches between a more modern single-camera drama and a classic multi-camera sitcom, with a jarring laugh track marking the transitions back to the latter. As Murphy's character becomes more attuned to her reality, she also becomes more murderous, specifically toward her husband, the titular Kevin.

Watch the first trailer for "Kevin Can F**K Himself," premiering this summer, below:

NEXT UP
Culture
6 Shows To Binge Once You've Finished 'The White Lotus'
fashion
How ‘Spice World’'s Costume Designer Nailed The ‘Scooby-Doo on Acid’ Look
Culture
Loewe’s Howl's Moving Castle Collection Is An Anime Dream
Culture
The Madonna Biopic Is Being Scrapped
Style + Culture, delivered straight to your inbox.