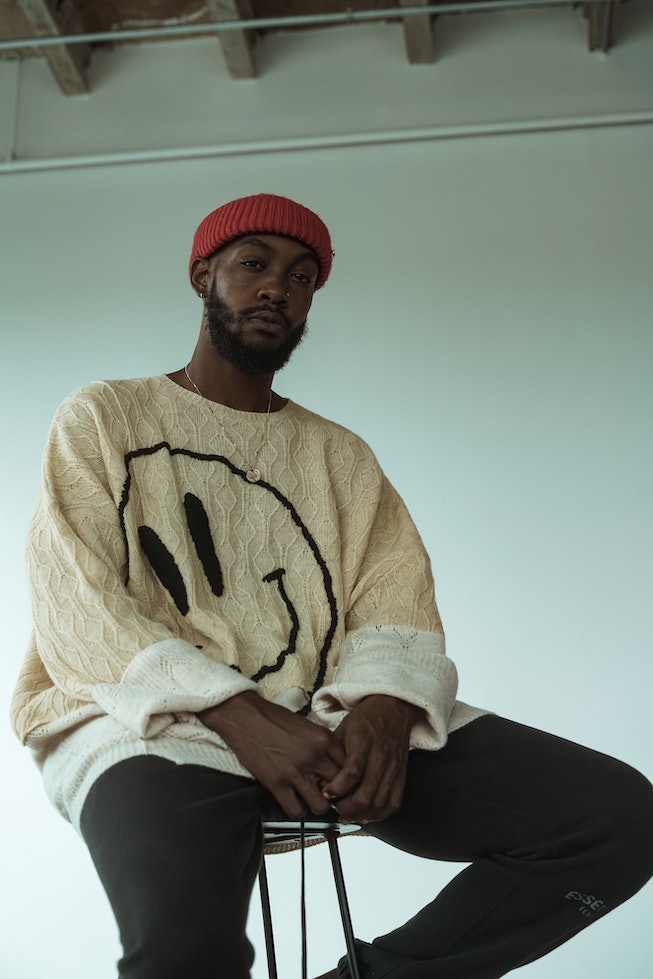 You may not recognize Ant Clemons’ name just yet, but you most likely know his work. The New Jersey native, and now first-time Grammy-nominated artist, is one of the soulful voices you hear on Kanye West’s gospel project Jesus Is King. He’s also one of the pens behind the celebratory “MOOD 4 EVA” from Beyonce’s The Lion King: The Gift. It’s his work on the former that landed him one of two nominations he’s betting on this year, for Best Gospel Album. The other nomination is a bit more special: His own debut project as a solo artist, Happy 2 Be Here, is up for Best R&B Album.

“I had gotten a call from my friend Ray, and he was like, ‘Bro! Yo, you're Grammy-nominated!’ And I was like, ‘What are you talking about?’” says Clemons over the phone, remembering how he received the big news. “And then more people start calling me back-to-back-to-back, and I was talking to my bro Harv, he called me and was like, ‘Heard you got nominated for Best R&B Album,’ and I just couldn't believe it.”

It’s the best-case scenario, and wildest dream, of the now 29-year-old singer and in-demand songwriter, who just five years ago was still in New Jersey waiting tables at Red Lobster. Happy 2 Be Here finds him finally gazing in the rearview mirror, marveling at how far he’s come, while also delivering some eclectic and raunchy soul (“Come and ride me, I'm Aladdin,” goes one line.) Over guitar and auto-tune on “Mama I Made It,” he toasts, “To no more bad days / To all them bills paid / I just told my mama I made it.”

Over the recent call with NYLON, Clemons recounted his meteoric year while en route to a hike in Los Angeles — besides his Grammy nominations, he also performed at the inauguration with Justin Timberlake. Below, he shares how that performance came together, what he’s learned from being in the studio with Kanye and Beyoncé, and how he’s feeling about being Grammy-nominated.

You have a big weekend coming up with the Grammys. How are you feeling?

I'm nominated two times this year by the grace of God for my work I did for Kanye on Jesus Is King, it got nominated for Best Gospel Album, and then I'm nominated for my own solo project, Happy 2 Be Here, for Best R&B Album. I just can't even believe that this is a reality right now. It's like, literally the best that ever happened so far in my journey. And I've wanted to be a part of the Grammys since I was a kid and I seen that picture of Michael Jackson with all the [awards], and Quincy Jones. So this is a dream come true for me. Just years in the making. I feel like I'm dreaming right now, honestly.

You grew up in New Jersey, can you bring me back there? What got you into music in the first place?

Recently I just talked to my high school [teacher], but growing up, when I reflect back to it, my house growing up, my mom and dad were constantly singing in the house. Like we were the house where everyone would come for parties. I was the only one with my own room, both my sisters shared their room, and my parents had their room together, so a lot of the time I would spend drawing or just imagining what life would be like when I grew up.

I always wanted to be Michael Jackson, so I spent a lot of time studying and watching Michael Jackson tapes in that room. Just building the world that inevitably turned into the manifested world that I live in now. I attest a lot of that to God blessing me with two parents that really instilled... one, the wherewithal of knowing that we can do anything with Christ, but then two, with hard work and perseverance you can make any dream you have come true. Both my parents support every last one of their children so it's just so cool to see in the household growing up, I already knew I was loved and I could make it anywhere.

When did you start taking music seriously?

I attribute every era of me being pivotal to the next. When I think back to waiting tables, it was such a time where I wasn't sure where my future would be. I just knew my present was not going to be my forever. So I was content knowing that what I was doing was going to get me closer to who I wanted to be. But it was just sleepless nights of, you know, you're working at a restaurant picking up shifts whenever you possibly can to make a cash tip. And then outside of that, going to the studio in Philly, going to the studio in Germantown working relentlessly, countless hours. If I got off work at Red Lobster, let's say at 11 o'clock at night, I was in the studio by 12. And if I had a shift the next morning at 10, I'd be in the studio from 12 to maybe 7. Get home with enough time to shower up and then get right to work.

It was just multiple days of doing that, and I think just linking up with my big sis, who was like, "Hey, you're really talented, I love you. Let's go to Cali. Let's figure this out. We've kind of exhausted this possibility in Philly as a songwriter and I feel like we should just go out to where the music industry is.” That time was just a whole new world, like the Aladdin song. Coming into the place where all the people that you imagine growing up, that you've only seen on television, were your neighbors or who you'd see at Ralph's. It's such a culture shock because you come from thinking that these people were in some place super far away — and 3,000 miles is pretty far, but it's not farther than your wildest dreams.

You've worked with Kanye, Beyoncé, and Skrillex. What's something you've learned as a songwriter from being in the studio with these veteran artists?

You recently co-wrote on SZA's "Hit Different." How did that collaboration come together?

It was an amazing day at the studio. I was honored just to even be there to be working with The Neptunes, and SZA was there. I had come out to the studio and Ty and I had shot the chorus together and SZA wrote every single thing that you hear her say. She wrote all of her words, every single last part of her section. But it was such a cool experience and it was so fun to watch her get into her groove while I was just creating with my friend.

You performed at the inauguration with Justin Timberlake. How did you prepare for that performance?

It was cool. Rehearsal as normal, but it was just surreal, thinking like, I'm rehearsing with Justin Timberlake a song that I co-wrote with him that is going to effectively help with the world. Every moment of it has just been the best time of my life. Going back and forth on mixes with the song, trying to make sure that our vocal performance was as perfect as we could possibly get it, to actually recording the choir, and performing in Memphis. The entire experience is one of the best things that's ever happened to me.

Right now, you’re working on a new EP. What do you hope this upcoming project will share about you?

My next effort is something that I've been waiting to drop my entire life. I feel like my first project was such a cool experience to let the world know that I wanted to be a part of this thing called the music industry, that we do. This upcoming project, I feel like it's some of the best music I've been making my entire life, and it's a little more of who I am as a person and what I wanna do in this time on this planet.