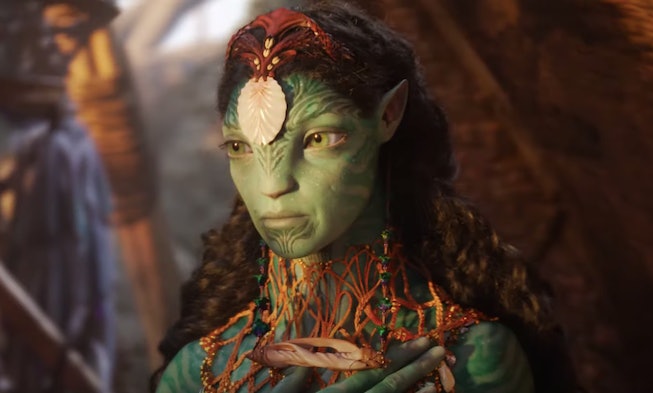 Thirteen years after the release of James Cameron’s Avatar, the highest-grossing film of all time, we finally have a look at the long-awaited sequel in the form of the Avatar 2 trailer.

Avatar: The Way Of Water picks up where the first film left off, and features much of the original cast — including Zoe Saldana as Neytiri, Sigourney Weaver in a new role, and Sam Worthington as Jake Sully. New cast members include Kate Winslet as Ronal, Michelle Yeoh as Dr. Karina Mogue, and Oona Chaplin as Varang. The new film finds Sully and Neytiri, star-crossed lovers who risked it all to be together, building their family on the planet of Pandora, and fighting new threats to its civilization.

Avatar 2 will be released on December 16, 2022, with the third part scheduled for a 2024 release. Cameron originally had planned for a 2014 release for the sequel, which obviously didn’t happen — in fact, the film has been pushed back a total of seven times.

Avatar had an unprecedented 10-month run in theaters when it first came out in 2009, becoming a global blockbuster hit. It’s since been referenced countless times in pop culture, as well as criticized for its depiction of colonialism without rigorous self-interrogation. The film was re-released in China last year, and as a result overtook Avengers: Endgame as the most lucrative film of all time.

Watch the trailer for Avatar: The Way Of Water, below.