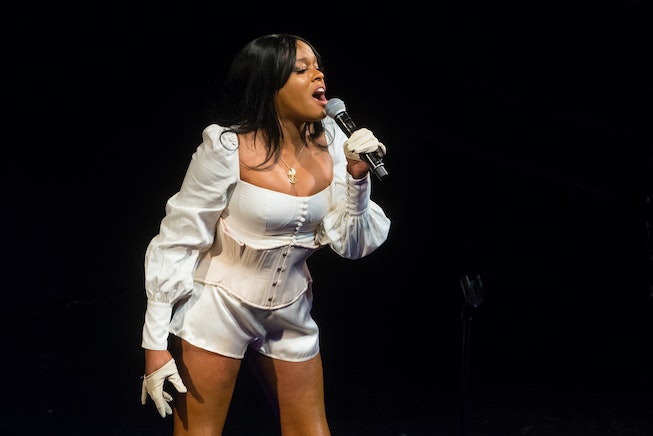 It's a good thing NYC clubs are still currently shut down, because you'd be hard-pressed to convince many DJs to get through an entire set without playing "212" at least once. And while trying to play a DJ set that doesn't include the surefire party-starter should be considered a crime, for the time being, it is what its creator, Azealia Banks, wants from her fans. Over the weekend, the rapper/singer/actress made a surprising request from listeners: do not stream her debut album, Broke With Expensive Taste.

In a series of Instagram posts uploaded to her account yesterday afternoon, Banks explained why. "It's with deep pain that I must ask all of my fans to stop streaming my debut album Broke With Expensive Taste," she began. "Jeff Kwatinetz stole all the money and sent a 15k check for [an] album that has been streamed over 200m times."

For those who don't know, Kwatinetz runs Prospect Park, the Los Angeles-based production company that Banks teamed up with shortly after cutting her ties with Interscope and Polydor Records in mid-2014. Though her critically-acclaimed debut album was largely created by herself while she was still signed with Interscope, it was Prospect Park (via Caroline Records) that handled the album's distribution upon its surprise release in November 2014.

According to Banks' post, however, this deal was not as sweet as it may have appeared, and now, six years later, Banks is reaping none of the benefits for an album that is still racking up endless plays on streaming platforms, while some of the album's producers also have yet to be properly compensated. So instead of streaming the album on traditional platforms, where it benefits Kwatinetz and no one else, Banks is asking her fans to wait for alternatives. "I have the master drive and will figure out a way to press physicals so you can enjoy the music and I can pay the producers on it the royalties they have been waiting six years for," she said.

In a separate post, she warned that Kwatinetz might try to block her efforts by pressing physical copies himself. "Do not purchase them," the rapper warned. "Only when they are available via ME will you actually be able to support myself and the producers involved. Do not buy them via Spotify, Amazon, Ebay, or any other site until I give you the word."

The rapper then proceeded to post several screenshots of a long email she received from Kwatinetz back on October 22, 2014, just two and a half weeks before her debut album arrived out of thin air after being delayed for over two years. The letter, which Banks captioned "The original lie," found Kwatinetz insisting that he had Banks' best interests at heart, even though she felt he didn't.

"Hey, just wanted to reach out and reiterate...that I put ethics and my artists first and foremost and never would want to take advantage of you in any way," it began. Throughout, he expresses his desire to make sure she's taken care of ("the last thing we would ever want is for you even to feel unfairly treated"), even mentioning that he is "super proud of the fact that I have never been accused of putting my interests ahead of my artists." In his email, he is a noble warrior, alone in fighting for Banks' singular genius. He paints himself almost as a martyr, using his track record ("It's why we have several clients we've worked with for over 15 years") and Banks' own troubled past ("I tried to get Capitol to do a direct deal with you but they wouldn't as they were scared off by the bullshit rumors") as proof of his supposedly selfless pursuits. As people in the comments were quick to note, it all came across as very manipulative.

In addition to "212," Broke With Expensive Taste spawned such hits as "Heavy Metal and Reflective," "Chasing Time," "Ice Princess," and "Luxury." Spending any amount of time without this album in my life will no doubt be hard, but alas.

In slightly better news, however, Banks also announced the release of a new single, "LVX," out this Friday.

Check out her posts below.