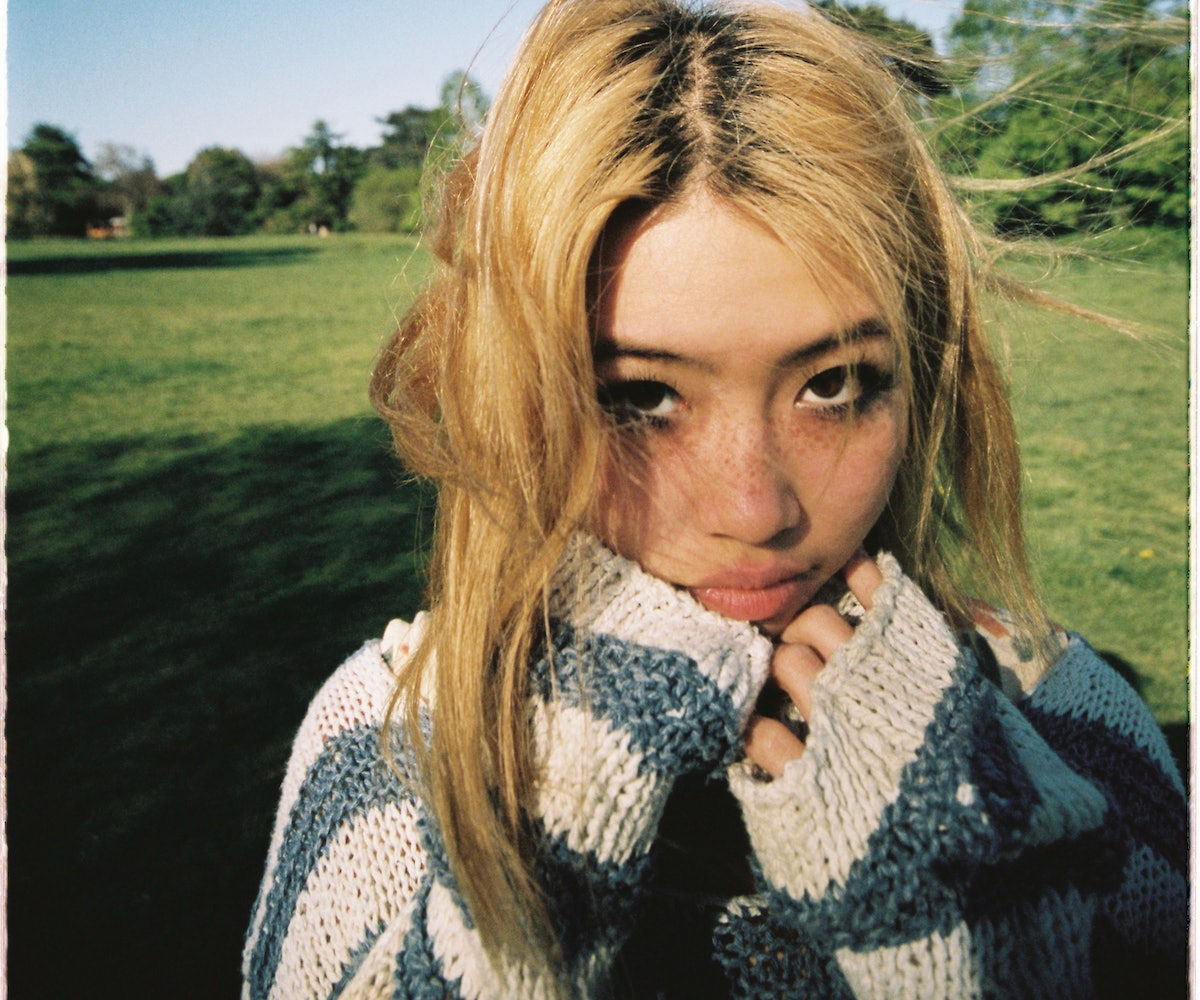 At 8 p.m. on a cool Wednesday evening in Oxford, beabadoobee is hard at work. It’s only been a day since the London-based singer-songwriter put out “Care,” the first single from her forthcoming debut album, Fake It Flowers, but her mind has long been on the next thing. At the moment, she’s posted in the quaint university town to work on an EP with her band and The 1975’s Matty Healy and George Daniel, which they hope to release later this year. “I finished the album before lockdown, so I’m just making music again which is nice,” she cooly states when we hop on the phone.

The past year for the young bedroom singer-songwriter, Beatrice Kristi Laus, has been a momentous one. Not only did she wrap up recording her first full-length project, she also embarked on her first national tours as an opener for Clairo and The 1975 (which they were in the middle of before the pandemic hit), was short-listed for the Brits rising star award (past recipients include Adele, Ellie Goulding, Sam Smith), and had one of her songs go massively viral on TikTok — sort of. Powfu’s “death bed (coffee for your head),” which has soundtracked millions of teens' newly-sparked romances with their best friends, heavily samples the very first song she ever released, “coffee.”

Her visibility in the pop landscape, even in the short eight months since NYLON last checked in with her, has ballooned exponentially. But if her newfound cult following has changed her at all, one wouldn’t be able to guess as she dryly jokes about receiving the Brits news while she was on the toilet. “I really didn't expect to even be nominated so it was a very lovely surprise,” she says graciously. “Yeah, it was sick.”

“Care,” the garage-rock-y, confessional song that leads the singer into her next era, is a compelling and seemingly more polished next step for the artist, honed from her previous three EPs and her realization that, for many of her wide-eyed young fans, her music tenderly speaks to their inner condition. It’s also a mantle she’s still getting used to wielding. Though her music feels like reading the intimate pen strokes in a cherished diary, Bea is trying to preserve the thin line between her innermost thoughts that go into her music, and her everyday realities; a juggling act that perhaps only the most accomplished songwriters can attest to navigating.

“I was always used to being in the background of things, especially in school,” she explains. “So it's attention that I'm not used to. Obviously, I'm extremely grateful for all the support that people have given me. It's like people actually give a shit about the music I make.”

Below, Bea speaks candidly about coming to terms with her fame, the surrealness of seeing an old song of hers suddenly go viral, and becoming more confident with her newfound position.

I've been observing your career trajectory over the last year, and your popularity has skyrocketed. How are you doing with the new visibility that you now have?

I try to stay off reading all the comments, because it is really strange. I was always used to being in the background of things, especially in school. So it's attention that I'm not used to. Obviously, I'm extremely grateful for the support that people have given me. It's like the people actually give a shit about the music I make. It's amazing. But that also comes with a lot of unnecessary comments from people who are going through it and like to take their hatred out. I try to understand them.

I'm just really bad at dealing with that sort of stuff and the whole attention thing. So I try to stay off Twitter and I don't read much comments. I guess, “Care,” I read a few things, saw what people were saying about it. And they're all really nice comments, so I was really happy. But, yeah, it is really scary. And I do think people tend to forget that I'm not used to this at all. But it's amazing, it's an amazing thing. I'm glad I'm doing it, I'm glad I'm here.

Has your relationship changed the way you use social media? Your music is very intimate, you write about your life. Does it feel weird now to write about what's going on?

Yeah, definitely. But I think it comes to a point where I just have to step off Instagram and just let the music do its talking. And I think this album does that for me. Obviously, during quarantine it made me realize that... just to stop being on my phone, just obsessing over what people think. Overall, made me much healthier, as a person, mentally. I rebuilt relationships. I spent time with my family, spent time with my boyfriend, I experienced real life instead of through a screen. I think right now I do appreciate the music and everything because it's something very close to my heart. I think it's time to open up that side of my life to people — not through Instagram, but through something so much more meaningful, like music.

What are some things you get the sense that people like about your music?

I think they have a relatability with my writing because I think we are all around the same age. It's mostly girls like me who like the same things, who experience the same things. They find a similarity with that. And also the fact that, I was also reading some comments yesterday, that they do feel there's a bit of a nostalgic feeling they get when they listen to my music. And it's probably because their mom used to play it when they were growing up, or the movies they liked. I grew up listening to all this music.

My mom used to play all these amazing front-woman bands. I subconsciously just used that inspiration through my music without even realizing. I got back into all these artists that my mom used to play when I was really young. I discovered more, and I think people can hopefully hear that and recognize that. I think they find that quite comforting.

There is a part of me that just wants to keep [my music] between just me and my best friends.

In an interview NYLON did with you last October, you made an offhand comment about how you needed to stop making songs that sound like songs from the '90s. Do you still feel that way?

Sometimes I do have a chord progression that is way too similar to a song that I already love. And I do it without realizing, but you can never be absolutely original these days, you just have to put your own twist on it. I do have the habit, but I've accepted that and it's quite like a beautiful thing when it comes through your music. It just feels genuine. It's nice hearing the inspirations come through, like who inspired me to make this music.

In that way, Powfu used your song “coffee” as inspiration for their song that is now blowing up on TikTok. Were you involved in any way? What are your thoughts around this song of yours gaining a second life?

I had no involvement with the song. I just said yes because I had no idea it would have blown up the way it did. And at first it was quite... It's still really strange that one of the most pure things I've created, which was “coffee,” the first song I ever wrote on guitar, is so accessible to everyone and so many people are listening to it. I think people can see the way I just said that, they can see that as me being ungrateful, but it's not that. I'm obviously extremely grateful and appreciative of all the support and the people that came from that song. But I think people should understand that it is a weird thing to go through when a song that's so close to your heart just gets blown up into a remix that I had no involvement in.

And I appreciate it, Powfu, and the song, and blowing up, and people liking it, and discovering me from it. I think it's super cool now. I've come to accept that that's just the way music works and that's how you gain more traction. I obviously feel like my music is so special to me, and there is a part of me that just wants to keep it between just me and my best friends. Because that's how I made music in the first place. I didn't care if people listened to it. I didn't care if it came out. I just wanted to make it. So it's obviously quite strange. But, honestly, I think TikTok is a really cool app and it's new thinking. It was cringe at first, but I think it's honestly the future, and it is going to be that thing where people will discover things. It's just growing... It's society, man. It's just like growing with society.

Is the album title Fake It Flowers a reference to anything, or is there any deeper meaning behind that?

It's quite funny, actually. I named the album that because every time I downloaded something on my phone, it would automatically save as "fake it flowers." If I was recording a demo in the studio or in my bedroom, it would just always automatically save as "fake it flowers." I found it really interesting because there was no flower shop near my house called Fake It Flowers, but found out that there was a shop called Fake It Flowers in my studio. It was like fate, all the songs just accidentally being saved under that name. I thought it was a really pretty name. That's the thing about flowers, that they are all so unique and beautiful in their own way.

Soundwise, what can we expect? “Care” definitely sounds a bit more polished than your previous releases.

I think, talking about the whole album sonically, it's like a mixture of everything. There are songs that remind me of the songs I first released, and there are songs that are thrashing, and have a massive production, or like a live recording. There's a lot of variety. And I feel like with my music, it's not like I've changed my sound completely, I think it's just developed. I've become more comfortable as a person, and with that comes with being more confident with the music I make and growing with myself, as well as the music. I think solidifying the people I listen to, the music I like, and the inspirations. I think it's just because I'm just more comfortable in my own skin and it's making me write songs like this and have a band. Now I have a band that are all amazing players and we can all do it together. So it's easier to make music because of the people around me and because we're growing with each other.