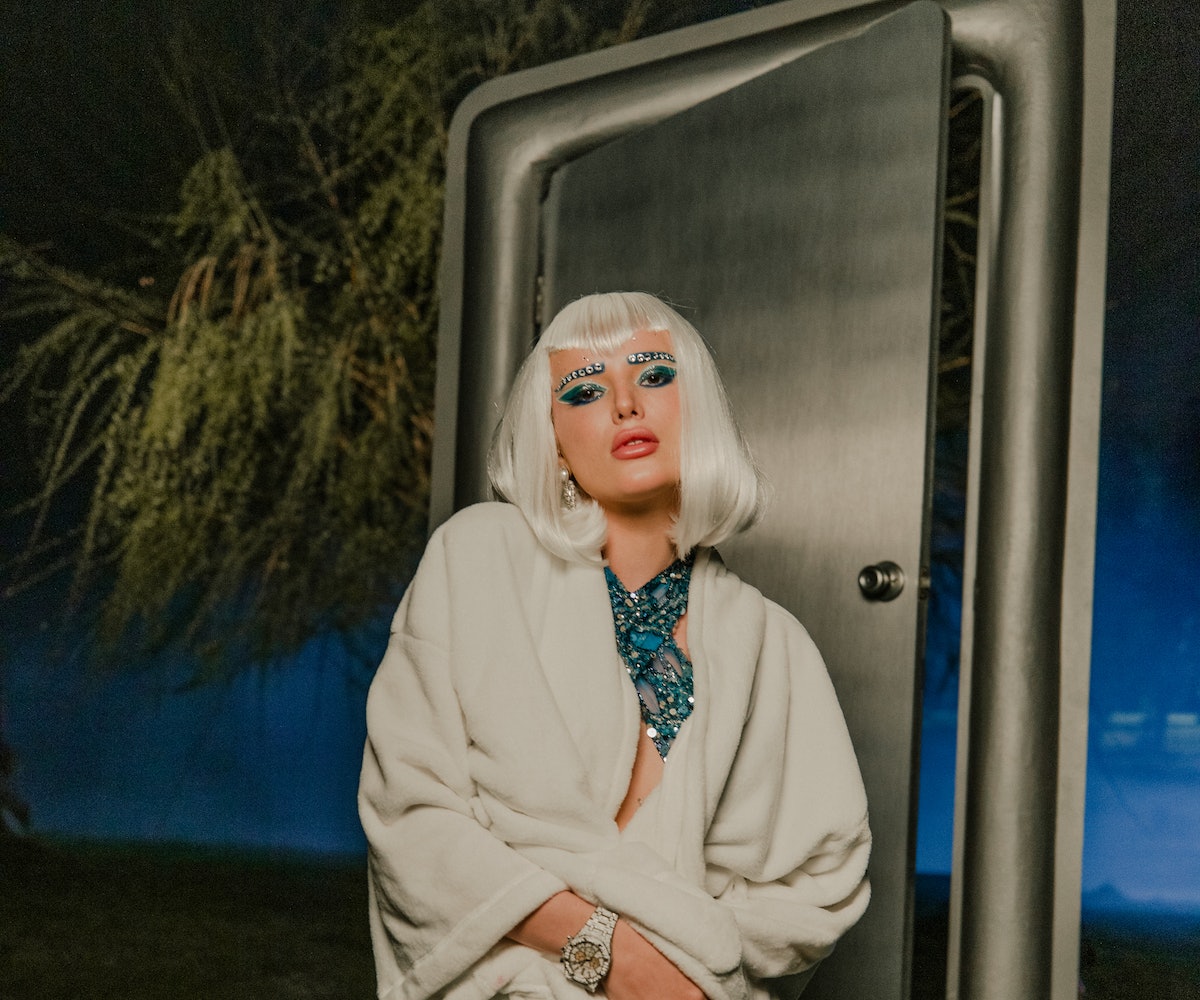 Bella Thorne wants to be clear: she does not hate men. Sure, her new song “Phantom” is a scorching rap-rock taunt calling out the demanding “piggies” (read: past male partners) in her life, but as she also clarifies on the track: “I’m not a man hater / I just need a daddy that’s loyal, not a traitor.” Dressed in a T-shirt with a lit, freshly-rolled joint in hand, Thorne expanded on the lyric over a recent Zoom call. “All of a sudden, you feel afraid to say you're a feminist in a room because everyone's going to look at you like you hate men, like you want to kill them all,” she says. “That is not what we're saying. That is not the point.”

“Phantom,” out Friday and exclusively premiering on NYLON below, is Thorne’s version of a feminist anthem — and she’s preemptively rolling her eyes at the backlash that tends to come with anything the multi-hyphenate does. Named after the ghost-like speed at which Thorne will drop a toxic relationship, the track responds to the many ways men have tried to control her and her friends’ lives, and how “I’m tired of them telling me how to live my life,” she says. (The newly-engaged singer did, however, say yes to her boyfriend Benjamin Mascolo.) “Girl, what he do? Thought I’d let him dress me / ‘How tight’s your top, isn’t it too sexy?’” she mockingly raps over a snarling beat. Thorne tapped veteran guitarist Malina Moye to seriously shred in the background, the crackling rip of her instrument acting as a final exclamation point to the song’s message. Altogether, it’s a brazen addition to Thorne's rapidly-unfolding musical universe.

“Phantom” follows a string of recent releases from Thorne, including “Shake It,” a slinky, twerk-friendly song that stirred up some controversy itself; its music video, which showed Thorne making out with porn star Abella Danger in bed while dressed in bridal lingerie, was briefly taken down by YouTube following its release. It prompted the actor and singer to call out the platform on Instagram. “What’s that about?!” she wrote. “And you all wonder why I’m on OnlyFans.” Calling from Los Angeles, Thorne explained her grievance more clearly: “If I was having a fake sex scene with a man, you would [leave it up]. You wouldn't take down that video because almost every pop f*cking song has a love scene with a male.”

Below, and joined in conversation with Moye, Thorne spoke at length about the censorship of her videos, empowering women with her music, and her new song “Phantom.”

Bella, you've been releasing many singles recently. How are you feeling about “Phantom”?

Thorne: I'm definitely most excited by "Phantom." This track for me is definitely an artist track, to be appreciated by artists. I like to release fun music and "Phantom" definitely goes under the category of fun, but it's also under the much bigger umbrella of “important.” I think when people really read the lyrics and they actually watch the video, it definitely is going to change their perspective, and hopefully this song changes people's perspective when it comes to the female-male dynamic relationship. And hopefully it changes someone's perspective when it comes to me as an artist.

Was this a remote collaboration or were you in the studio together?

Thorne: We actually have very, very different, busy schedules. So we weren't able to get in the studio together to lay it down, but I know with Malina, it didn't matter if I was in the studio with her or not, she's going to send it back and it's gonna be murdered. It's going to be f*cking killed. [Laughs.]

Moye: Thank you! And Bella had put such a beautiful foundation down already so the record was already amazing. I heard the flow. I was like, "Oh, I get it." And then I was like, "Hey, let's add some of this."

Behind the scenes from the “Phantom” music video, out April 2.Alex Peterson
Alex Peterson

What I got from the song is that it sounds like you asserting your own agency in leaving a controlling relationship. Can you speak a bit more about the female-male dynamic you brought up earlier?

Thorne: Girl, I'll bring it up. I'll bring it up all f*cking day. I'll preach this sh*t. I think as women in general, we've all been in a relationship with a partner, especially when it's the female and male dynamic, we definitely feel that dynamic shift in our lives. All of us have dated someone who has told us the way we should dress, the way we should dye our hair, the way we should look. "Oh, are you sure you're gonna wear that today, babe? I really like the other one though, your body looks really great in that one." Like, there's so many comments that you hear from men to women, and sometimes I don't think they even mean it. They're just raised that way and they don't even realize what they're saying, it doesn't make us feel good.

There's a lot of friends in my life who were in some very controlling-ass relationships. That's exactly where that line comes from: "Is that skirt too short?" "Is it sexy?" We're gonna make a song for every girl out there that's like, "F*ck these men! I'm tired of them telling me how to live my life!" That was the theme when we were in the studio writing it. That's also why it was really important to put the part about, "I'm not a man hater / I just need a daddy that's loyal, not a traitor."

Thorne: Yes! That's the truth. People have put such a bad connotation on the word "feminist" — [and] it's a beautiful word — that now all of a sudden you feel afraid to say you're a feminist in a room because everyone's going to look at you like you hate men. Like you want to kill them all. Like you want no men on planet Earth and women run the whole entire world and want no men alive, and that is not what we're saying. That is not the point!

Malina, when you were laying down the guitar, was it mostly freestyle?

Moye: I look at this as a hip-hop track. Bella said, "Do what inspires you." I started thinking about Jay-Z and his "Death of AutoTune." The E chord is the aggression of a woman saying, “Take this, now!” And then with the solo, I was like, man let's just go off.

Bella, you write all of your songs. When you go to the studio do you have any rituals that you do to get in a creative headspace?

Thorne: Smoke f*cking weed, which is my ritualistic headspace when I'm writing. [Laughs.] In my studio I always have coffee, which is terrible for your voice. You shouldn't drink it while you're in the studio but I'm f*cking tired. I have hot water with honey, and then some type of vodka drink for fun. I have my writing book and my notes pad and then I have Sabir and me and usually an engineer or producer.

YouTube recently took down your "Shake It" video, though it's back up now.

Thorne: Section 230 needs to be looked at again! [Editor’s Note: Section 230 is a piece of legislation that protects users and content hosting websites from being held liable for information published by other users or providers. It also offers protection to users and providers for removing material they consider to be “obscene, lewd, lascivious, filthy, excessively violent, harassing, or otherwise objectionable, whether or not such material is constitutionally projected” as long as the action is “taken in good faith.”]

You called out the company's double standards on censoring videos, and this is something they've been doing to women artists for so many years. I know CupcaKke has had her videos taken down and Mykki Blanco. Do you think there's hope in changing that standard?

Thorne: Yes, I do. I want to also start my own platform for women. You know, people were like, "Maybe you shouldn't post [“Shake It”] Bella, cause YouTube's going to be mad at you and they're gonna take down all your next videos too." And I'm like, I don't give a f*ck! They're gonna do it anyway because clearly I'm a woman and I'm making out with a woman in this video. If I was having a fake sex scene with a man, you would put it in. You wouldn't take down that video because almost every pop f*cking song has a love scene with a male. It's just so much of our content that we view that we think that's normal, but as soon as it's two women, it's, “Oh, it's salacious, it's so overly sexual, it's so blah blah blah, oh my God.” And you're just like, "What are you talking about?"

I have this song called "Mama I'm Proud." And the whole song talks about how, when I'm looking in the mirror, I'm talking sh*t. "You a hoe, you a b*tch, you a failure, you should quit. You should sing like Taylor Swift." Because that's what everyone says. Why is it as women, that nothing is ever good enough for us, that we are never at the top of the chain? We never feel that we have done something amazing. There's always something and it's just so important to change the narrative. To change the mental narrative that we tell ourselves every f*cking day.

Moye: Being a Black woman and dabbling in the rock world, and playing guitar, one of the things I'm constantly saying is: "You have to change the narrative." How come we don't see more women on the cover of these guitar magazines? Why is it always men? Why are these people constantly regurgitating the same people when it's 2021 and surely there are more women playing?

My mom and dad always said to me, "Malina, when you don't see yourself represented, show up. When you think you can't, show up. And always know you matter and you count." So just by being there, you're making change and making people feel like, “Yeah, if Bella's doing it, then f*ck it, I'll put my video up too. And if I want to do this with this person, that's who I am. That's what I'll do.” Well, that's important.