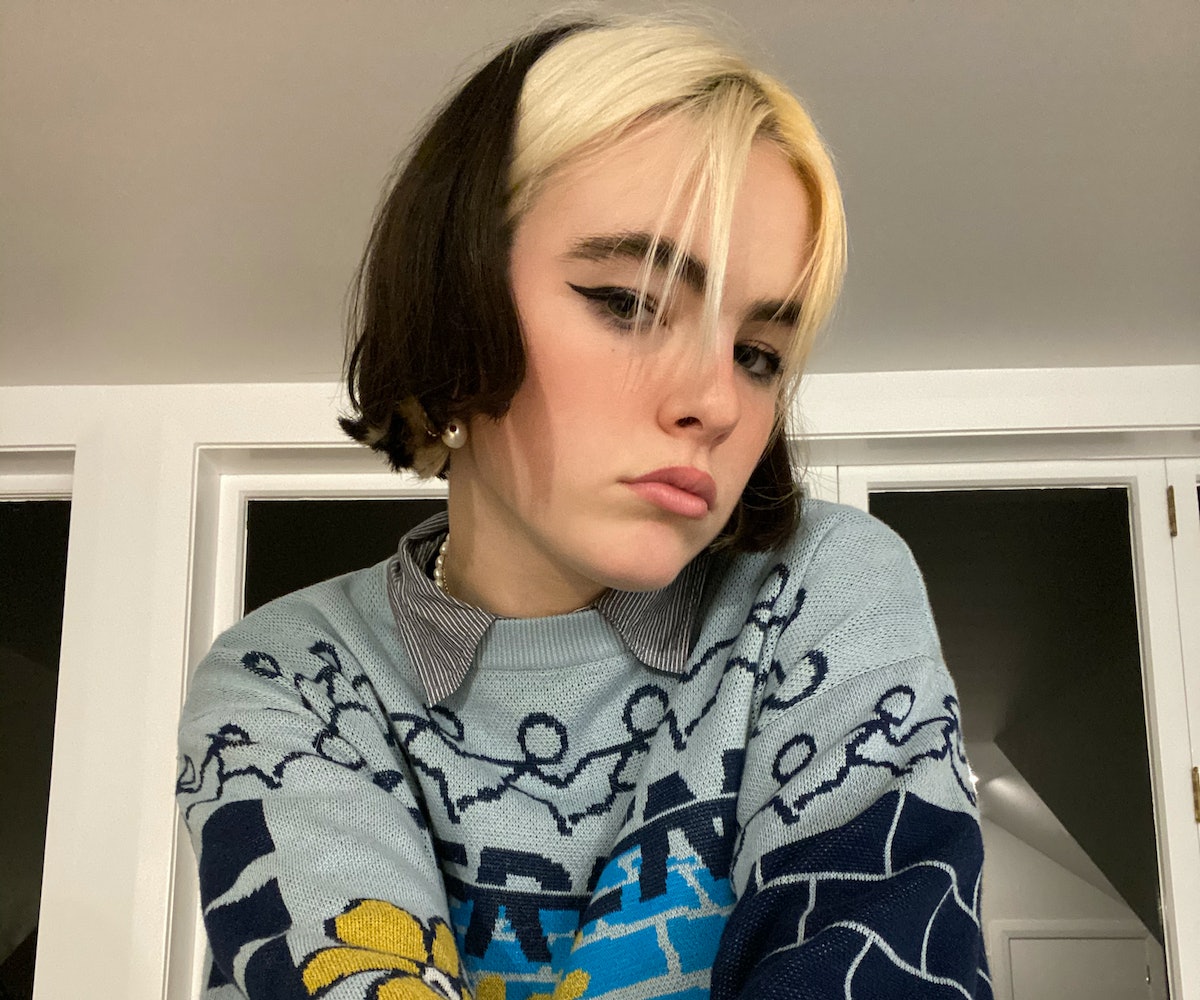 “This year is so, kind of like, spacey,” Benee says over Zoom in what may be one of the biggest understatements of the year.

The 20-year-old New Zealand songwriter, whose signature brown bob now sports a vibrant Fanta-orange streak thanks to a quarantine dye-itch, is still processing the past six monumental months. In that time, she made her television debut on Fallon, performed on Ellen, and was awarded the coveted Up Next title from Apple Music as the first-ever Kiwi recipient — all while a global pandemic meant she did it without leaving the tranquil premises of her childhood home in Auckland. “It feels very weird and surreal,” she says. “I kind of feel guilty that good stuff is going on with me. ... Look at what's happening to the world. The world is so f*cked right now.”

For all her conflicted feelings, Benee has “Supalonely” to thank, a song she released in November 2019 with Los Angeles e-boy and musician Gus Dapperton that belatedly blew up on TikTok right as the world shut down. The whimsical tune about feeling alone — delightfully punctuated by “arghs,” “mm, ah, yeahs,” and a head-bobbing, syncopated beat — has been streamed more than 400 million times on Spotify since, and soundtracked more than 11 million dances. With its self-deprecating lyrics (“I know I f*cked up, I’m just a loser,” it opens), it was more or less a siren call for the outsiders of Gen Z — in the best way, of course. “[TikTok] is just a bunch of weird kids who are doing cool stuff,” Benee says. “Which is like sick.”

Benee, born Stella Rose Bennett, was encouraged from a young age to channel her creativity into the arts. Alongside attending “clay-making workshops” as a child, she took up the saxophone at age 8 — an instrument choice, she surmises, likely inspired by watching Lisa Simpson — and then the guitar during primary school. Alongside Radiohead, Bjork, James Brown, and Aretha Franklin that her parents would play at home, Benee also listened to local Kiwi acts like Fat Freddy’s Drop, a prominent New Zealand reggae and jazz fusion band.

In high school, Benee began tinkering with GarageBand, recording song covers and uploading them onto SoundCloud. By the end of senior year, she was sharing and writing her own songs, eventually ditching her plans to go to college to instead pursue music full-time. Her music soon caught the eye of Josh Fountain, a producer and musician in the influential New Zealand alt-rock group Leisure, and now one of her close and frequent collaborators. He invited her to meet up in the studio; “That was when I learned how to properly craft a song,” Benne says of their first few sessions together. “I was figuring out what I wanted to create and how I wanted my music to sound.”

They made her first ever single, 2017’s “Tough Guy,” and followed it up with 2018’s “Soaked,” the latter landing on Australian radio station Triple J’s Hottest 100 songs of the year list. Both tracks were sly pop numbers and could easily be considered early iterations of the Benee blueprint, which eventually found success in the TikTok engine.

“Glitter” from Benee’s first EP, FIRE ON MARZZ, was her first song to blow up on TikTok, thanks to its shuffling beat and Benee’s peculiar vocal delivery. “People were kind of sending me these videos and I really was just like, ‘What is this thing?’” she recalls. By the time “Supalonely” took off in March 2020, “I realize[d] how it's a super helpful new platform for getting your stuff out there to huge audiences. I think I have a lot to thank it for.”

Not one to rest on her laurels, Benee’s already looking toward her debut album, expected to come out this fall, making it her third project in under two years — a fairly prolific output for such a young artist.

“Snail” and “Night Garden,” the two singles she’s already shared from the album, dig deeper into the Benee mythos — “I'm like a snail, you're a guy,” she cryptically intones on the former’s playground chant-like chorus — while effectively stretching out her sonic soundscape; she teamed up with rap’s producer-of-the-moment Kenny Beats for “Night Garden,” a darkly voyeuristic alt-pop tune that could moonlight as a Charlie and the Chocolate Factory Oompa-Loompa medley.

“I feel like someone who likes one song will probably hate the other ones on the album because they're all different,” Benee muses. “Some who love pop [will] love this one song, and then they'll hate drum and bass so they'll hate this song. I've definitely not held back on just trying out pretty much every genre and whatever I kind of felt like at the time and I think that it's pretty eclectic […] I love the idea of everything kind of like not working, but then kind of being stuck together as a body of work.”

It’s that off-kilter, slyly playful quality that makes Benee’s ostensibly simple pop continue to prick the ears and conquer on the internet, music’s most notoriously fickle playground, where what’s hot right now flickers by like the departure board at a train station. Forget about five years from now — where will Benee be in 12 months?

“I'm not ever going to just be doing like one thing, you know?” she says. “I hope that the next album that I make will be completely different to this one, because I don't like making a song that’s [like] something I've made previously. It's just something that I'll continue to try and do throughout my whole career.”