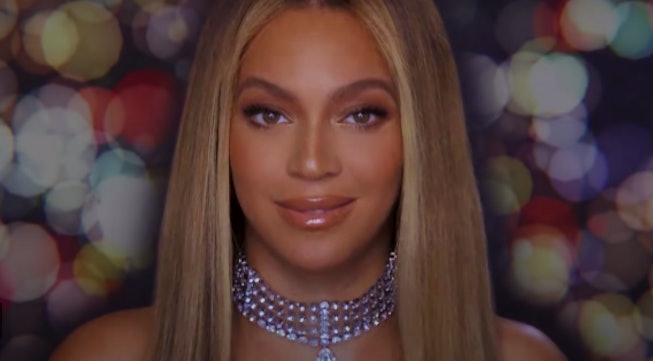 This weekend belonged to Beyoncé Giselle Knowles-Carter. Not that every weekend doesn't belong to her — because, let's be honest, they all do. But this weekend, in particular, belonged to our Queen Bey, who accepted a BET Humanitarian Award with an empowering speech and announced a special new project for Disney Plus, all within a span of less than 24 hours. When will your fave?

At last night's socially-distanced virtual edition of the 20th Annual BET Awards, Beyoncé was honored with the Humanitarian Award for the charitable work she has been doing for years through her Bey Good organization. She was presented the award by one of the few Black women who, at one point, might have been considered more powerful than her: former First Lady Michelle Obama, who, after referring to Beyoncé as "the queen," noted, "To my girl, I just want to say you inspire me. You inspire all of us." Upon virtually accepting the prestigious award, Beyoncé gave one of her traditionally powerful speeches (less than a month after blowing the world away with her commencement speech for YouTube's Dear Class of 2020 special).

"Thank you so much for this beautiful honor. I want to dedicate this award to all of my brothers out there, all of my sisters out there inspiring me [by] marching and fighting for change. Your voices are being heard and you're proving to our ancestors that their struggles were not in vain," she began.

Later, she delivered a call-to-action for everyone to do their civic duty and vote. "Now, we have one more thing we need to do to walk in our true power, and that is to vote. I'm encouraging you to continue to take action, continue to change and dismantle a racist and unequal system. We have to continue to do this together, continue to fight for each other and lift each other up because there are people banking on us staying at home during local elections and primaries happening in states across the country. We have to vote like our life depends on it — because it does," she said.

Her award came on the heels of something else exciting: the announcement of a new project that she wrote, directed, and executive produced for Disney Plus. (As with all Beyoncé projects, nothing leaked about its creation prior to her reveal.) Titled Black Is King, the project is a companion piece to last year's "live-action" reimagining of the classic Disney film The Lion King — which, if you recall, starred Queen Bey herself as the adult version of Nala, and also found the 24-time Grammy® Award-winner executive producing and curating The Lion King: The Gift, the film's quasi-soundtrack (really just an album "inspired by the film").

Now, a year after that film's (box office-breaking) release, Beyoncé is feeding us yet again with Black Is King, described as a "visual album" that "reimagines the lessons of The Lion King for today’s young kings and queens in search of their own crowns." In an Instagram post, Beyoncé described her motivations for the long-gestating project, expressing particular excitement about her ability to release it right now, in the midst of a cultural reckoning about how Black people have been treated in America.

"I wanted to present elements of Black history and African tradition, with a modern twist and a universal message, and what it truly means to find your self-identity and build a legacy," she described in an uncharacteristically long caption. "I spent a lot of time exploring and absorbing the lessons of past generations and the rich history of different African customs. While working on this film, there were moments where I’ve felt overwhelmed, like many others on my creative team, but it was important to create a film that instills pride and knowledge."

Judging by the visual album's accompanying trailer, Black Is King is indeed a celebration of Blackness, showing beautiful Black people adorned in gorgeous, royal clothing. In this way, the film seems to be seeking to connect The Lion King's African setting to the actual people and customs of that great continent. And it's Beyoncé, so you already know it will be meticulously researched and thoughtfully created.

Black Is King will be available exclusively on Disney Plus starting July 31st. Check out a trailer here.

UPDATE: Less than two weeks ahead of its Disney Plus premiere, Black Is King has shared a second trailer. The tight one-minute clip offers a sneak peek in who we can expect to make cameos in the film, and the list is expectedly star-studded. In addition to some of the artists that appear on the The Gift soundtrack, Black Is King will feature appearances from Oscar-winning actress Lupita Nyong'o, Beyoncé's fellow girlgroup member Kelly Rowland, supermodels Naomi Campbell, Adut Akech, and Aweng Ade-Chuol, and, of course, Mama Tina Knowles-Lawson.

Check out the latest trailer below and set your calendars for Black Is King's premiere on July 31st.

Editor’s Note: This article was updated to include the second trailer for 'Black Is King'.

This article was originally published on June 29, 2020