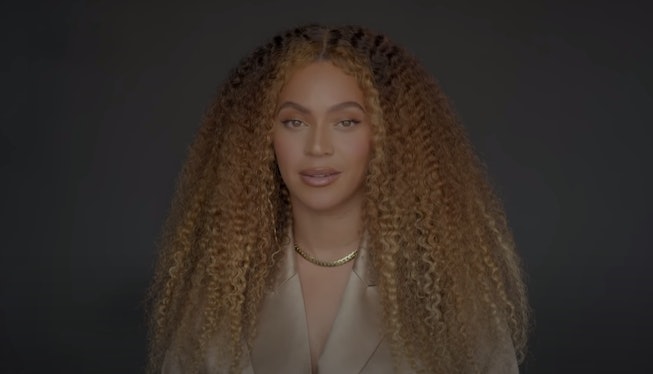 In the words of Saturday Night Live's beloved Stefon, Beyoncé's commencement speech for YouTube's "Dear Class of 2020" special has everything: a statement of support for new graduates, a shoutout to the Black Lives Matter movement, callouts about sexism in the entertainment industry, and a brief moment where she bemoans the fact that she never got to attend any college parties "that left you struggling the next day in class." Aired yesterday, the multi-hour livestream event celebrated all the Class of 2020 students whose graduations were canceled due to the ongoing COVID-19 pandemic. Featuring appearances by Lady Gaga, BTS, Barack and Michelle Obama, as well as performances by Katy Perry and Megan Thee Stallion, the special was certainly grander than most graduates would have gotten otherwise. But as is the case with most things she appears in, it was Beyoncé Knowles-Carter who stole the show with her inspiring oration.

"Congratulations to the Class of 2020. You have arrived," the pop star began, sitting in a bare room, dressed in a champagne-colored satin blazer with a simple gold chain to accessorize. "Here, in the middle of a global crisis, a racial pandemic, and worldwide expression of outrage at the senseless killing of yet another unarmed Black human being, and you still made it. We're so proud of you."

Throughout her ten-minute speech, the multi-Grammy winner called attention towards the Black Lives Matter movement, both explicitly — like when she said, "Thank you for using your collective voice in letting the world know that Black Lives Matter" — and implicitly. Late in her speech, she told the Class of 2020 graduates that their thoughts, actions, and words are powerful. "Look what you've been able to do in the past 14 days," she exclaimed, clearly referring to the widespread protests that have erupted over the past two weeks following George Floyd's murder at the hands of a police officer. "We've seen the power of the collective. We've seen what happens when we join for the same cause. Please continue to be the voice for the voiceless." Later, she added, "This is a crucial time in our history and in your life. The earth is ripping that band-aid off so we can really see our wounds, so we can acknowledge and nurture them. That's when true healing begins."

Elsewhere, Miss Knowles-Carter celebrated some of the students whose accomplishments might hold more weight than their peers. "Some of you might be the first in your family to graduate from college. Maybe you did not follow the path that was expected of you and you questioned every decision," she said. But perhaps the most memorable part of her speech came early on, after the Dreamgirls star detailed "how hard it is to step out and bet on yourself" by opening up about the "pivotal time" in her own life when she chose to build her own company many years ago. "The entertainment business is still very sexist, it's still very male-dominated, and as a woman, I did not see enough female role models given the opportunity to do what I knew I had to do." She continued, "To run my label and management company, to direct my films and produce my tours, that meant ownership — owning my masters, owning my art, owning my future, and writing my own story."

Then, to borrow some words from her equally talented and inspiring sister Solange, Beyoncé said, "Not enough Black women had a seat at the table. So I had to go and chop down that wood and build my own table. Then, I had to invite the best there was to have a seat. That meant hiring women, men, outsiders, underdogs, people that were overlooked and waiting to be seen."

The entire speech is worth a watch, if even just for the moment when Beyoncé says, "I'm often asked, What's your secret to success?" In response to her own question, she chimes in, "The shorter answer: Put it in that work. There may be more failures than victories. Yes, I've been blessed to have 24 Grammys, but I've lost 46 times — that meant, rejection 46 times. Please, don't ever feel entitled to win. Just keep working harder. Surrender to the cards that you are dealt; it's from that surrender that you get your power."

I don't know about you, but suddenly I feel extremely motivated to work as hard as humanly possible. As thee Queen Bey says, "Whatever the world looks like in 10 years, in 20 years, part of that is up to you."