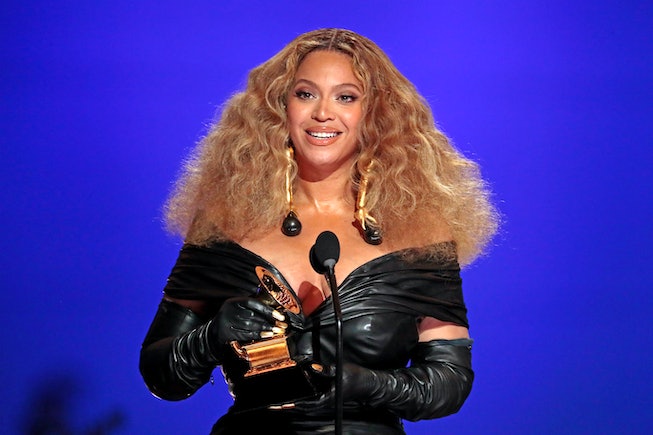 Beyoncé didn’t drop a solo album in 2020, nor did she arrive at Sunday’s Grammy award ceremony on time, but the elusive superstar still managed to be the biggest headline of the night thanks to a history-making win, and, well, just being Bey.

Coming into Sunday night, the Houston native already led the pack with nine total nominations, including two Record of the Year nods despite the fact that she hasn’t released a solo album since 2016’s Lemonade. By the end of the long night, Bey walked away with four trophies — Best R&B Performance (“Black Parade”), Best Rap Performance (“Savage Remix”), Best Rap Song, and Best Music Video, which she shared with her daughter, Blue Ivy — and simultaneously broke the all-time record for most Grammy wins by a female artist. (Blue, 9, had her own history-making moment as she became the second-youngest person to ever win a Grammy.)

But it was Beyoncé’s own reaction to learning about her record-breaking win that got the internet talking — from memes that spawned from her stunned reaction, to more critical discussions about which awards the Grammys choose to give, or not give, to Black women artists.

As Beyoncé and Megan Thee Stallion were walking off stage after accepting their Best Rap Song Grammy for “Savage Remix,” host of the night, comedian Trevor Noah, stopped the two women mid-step to announce that Beyoncé had just tied the all-time record for most Grammy wins by a female artist. Bey’s reaction to the surprise affront was immediately noteworthy: a mix of tepid shock, light dissociation, and perhaps a smidgen of discomfort for being caught off-guard by the news.

A snapshot of her largely unimpressed facial expression immediately went viral, as commentators connected to it on a spiritual level, or saw it as another hilarious instance of unimpressed Bey being Bey.

Some online, however, saw her history-making moment as bittersweet. After Beyonce won her 28th Grammy award later that night for Best R&B Performance, officially breaking her previous record, the conversation quickly evolved into one critiquing the Grammys.

While the accomplishment in and of itself is a huge feat — at this point, only one other person can say they’ve achieved it (Hungarian composer Sir Georg Solti still holds the most Grammy awards won with 32 awards) — people online were quick to point out that the majority of Beyonce’s wins were in genre-specific categories, and virtually none in the major general field categories. Beyonce has never won Album of the Year, nor Record of the Year. Though in 2010, her song “Single Ladies” did pick up Song of the Year.

For many, the revelation was a reflection of how the Recording Academy continuously positions itself as progressive when it comes to giving women — specifically Black women — their dues, while still not awarding them the trophies that matter.

The discussion continued at the close of the evening when Billie Eilish beat out Megan Thee Stallion for the biggest award of the night, Record of the Year, taking home the distinction for her second year in a row. In her acceptance speech, Eilish was visibly flustered, and dedicated the award to Megan.

"This is really embarrassing for me,” Eilish began. “Megan, girl... I was going to write a speech about how you deserve this. But then I was like, 'There's no way they're gonna choose me.' I was like, 'It's hers.’ You deserve this. You had a year that I think is untoppable. You are a queen. I want to cry thinking about how much I love you.”

The moment reignited the years-long debate over the now-Grammy tradition of white artists dedicating their award to a Black artist that should’ve won, as Macklemore did in 2014 when The Heist won Best Rap Album over Kenrick Lamar’s good kid, m.A.A.d city.

While the Grammys have made considerable changes in creating a more equitable playing field for Black and women artists in recent years, it feels like they’re still playing catchup with a gap that’s widening by the year — and it’s only a matter of time before they get completely left behind.

See more of noteworthy memes and reactions from Sunday night below.