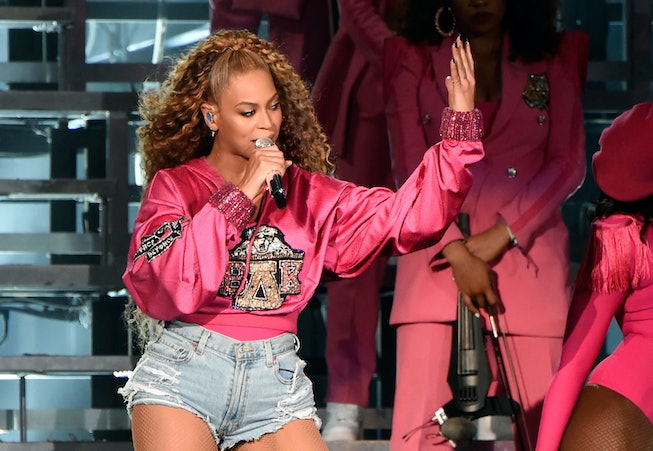 After taking over TikTok (and, let's be honest, the world) with her #SavageChallenge, Megan Thee Stallion has graced us all with a new remix featuring none other than Thee Beyoncé Giselle Knowles-Carter. You probably don't need me to tell you this, but, yes, the updated track is just as brilliant as you would expect.

The remix finds Beyoncé tapping into her rap alter-ego, smoothly gliding over the already iconic "Savage" beat with bars about TikTok, OnlyFans accounts, "demon time," twerking, and the pain that comes from having to jump up and down to fit into your jeans. As if that wasn't enough, the Queen of the Beyhive also says "gang gang gang," therein fulfilling all the dreams I didn't even know I had. But we can't forget about Megan either, who manages to squeeze in some fresh bars in two entirely new verses, where she rightfully compares herself to Tunechi before elevating herself above D4L of "Laffy Taffy" fame.

The four-minute track is a powerful testament to the talent of both these Houston Hotties, so it's only right that they take their hometown pride a step further by donating all artist proceeds from the remix to Bread of Life Houston's COVID-19 relief efforts. It's important to, as Megan says in an Instagram post, "support our city during this pandemic!" Which means that, even though we may not be able to twerk to this anthem in the club, at least we can bop for a cause!

Get the party started with this future classic below.