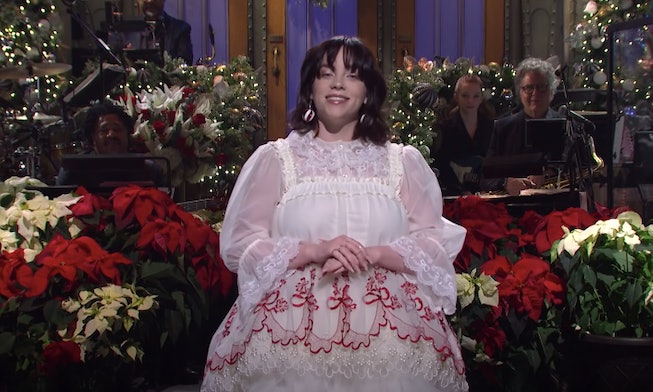 Billie Eilish stopped by NBC this weekend to host the latest edition of Saturday Night Live. Though the singer-songwriter has been the sketch show’s musical guest before, this was her first time acting with the cast. Throughout her 90-minute holiday-themed episode, Eilish delivered the opening monologue, appeared in numerous sketches, and sang two songs from her sophomore album, Happier Than Ever.

To open the show, Eilish stepped on stage wearing a semi-sheer Christmas dress. After greeting the audience, she said, “You may know me from my music, you may know me for my hair or my clothes, that’s why I decided to dress like Mrs. Claus going to the club.” In the past, the singer’s been both lauded and criticized for her self-expression, which she further touched on in her opening remarks.

“I am turning 20, or as the internet calls that, middle-aged,” she continued. “But I am actually really excited to get older because I am just now starting to understand who I am as a person. And the scary thing about growing up in the public eye is people just decide that everything you say, and do, and look like, is who you are forever.” She added, “It’s not fair. Would you want to be judged by the way you presented yourself when you were 16?”

After concluding with a joke about SNL comedian Colin Jost, the singer proved she is more than we may think. Throughout the episode, Eilish appeared in a multitude of skits that showcased her range as a performer. From a nervous neighbor, to a deadpan hotel worker, fame-seeking TikTok nurse, and more, Eilish truly gave each performance her all.

Eilish also performed her viral song, “Happier Than Ever” and the more mellow-track, “Male Fantasy.” The musical portion of the show was a family affair. Eilish was introduced to the audience by her parents Maggie Baird and Patrick O’Connell, then performed alongside her brother Finneas, who accompanied her on the guitar.

Though her album Happier Than Ever has already earned Eilish seven-grammy nominations and an upcoming world tour, the singer isn’t slowing down just yet. According to her brother, they are currently working on new music together. In an interview with Rolling Stone Finneas said, “we’ve got the net in the ocean and we’re picking up detritus. And then you sift through all that, and you pick out the treasure, and then you have an album.” “I’m really excited,” he continued. “I think we’ve got a lot to say.”