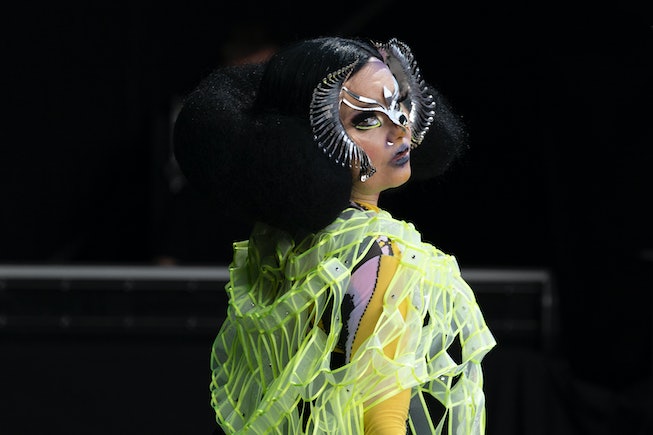 Avant-garde alien superstar Björk is returning with a new album.

The last we heard from the legendary Icelandic singer-songwriter was in 2017, when she released her ninth studio album, Utopia. That album, filled with flute and string arrangements, was her airy and whimsical opus dedicated to love and the the concept of sanctuary, while also probing her own thoughts about the political and climate issues facing the world.

The artist has now set her gaze on the opposite side of the spectrum for her forthcoming tenth album. Fossora, which Björk formally announced on August 24, drags the singer back to the Earth to explore more grounding concepts.

“each album always starts with a feeling that i try to shape into sound,” wrote Björk of the concept behind the upcoming record in a poem-like caption on Instagram. “this time around the feeling was landing (after my last album utopia which was all island in the clouds element air and no bass) on the earth and digging my feet into the ground.”

While the singer is back on solid ground for her new album, Fossora is sure to still arrive with its own eccentricities and boundary-breeching sounds. The album’s fantastical cover, which the artist unveiled on August 31, already hints at the gnarled, psychedelic universe that the musician looks to be building.

Read on for everything we know so far about the project, including more information about the album’s theme, the release date, the meaning of the word Fossora, and the record’s large stable of collaborators.

What songs will be on Fossora?

Björk released lead single “atopos” and its music video on Sept. 6. The pounding and percussive track finds the singer meditating on the fragility and necessity of human connection and is built around electronic beats, orchestral backing, and her chant-like vocals. It sounds simultaneously more stripped-down and naturalistic, and more lush than her recent works, with a barebones electronic presence and the presence of a playful oboe and woodwind section. Thematically, the track appears to have been written over the course of 2020’s and 2021’s lockdowns, as Björk questions ideas posed upon her during isolation: “are these not just excuses to not connect?”

In its accompanying video, directed by Viðar Logi, Björk continues to play on the theme of communication and grounding by seemingly throwing a rave amid a fantastical landscape of fungi and other leafy vegetation. Mushrooms and fungi, as it’s widely known, “communicate” via an underground mycelium network which also acts as a water and nutrient system for surrounding vegetation, trees, and plants.

Previously, the singer explained the sonic direction of the album to be, “about bass, heavy bottom-end,” the musician wrote on Instagram. “we have 6 bass clarinets and punchy sub.”

When will Fossora be released?

Fossora will be released on September 30 via One Little Independent Records. Pre-order the record here.

What will Fossora be about?

As mentioned above, Fossora will focus on the concept of grounding and landing, of “digging my feet into the ground.” The album’s title is a direct allusion to that concept; the made up word stems from the Latin word fossore, which means digger, delver, ditcher. Fossora is the feminine conjugation of the term, “so in short it means ‘she who digs’ (into the ground),” writes Björk.

The record will also be heavily inspired by the past two years and the on-going pandemic.

“it was also woven into how i experienced the ‘now’,” Björk adds. “this time around 7 billion of us did it together nesting in our homes quarantining[.] being long enough in one place that we shot down roots.”

Who will be involved on Fossora?

A host of musicians, producers, engineers, and others are already credited to be involved on the record.

Notably absent in the list is Arca, the Spanish artist and producer who heavily contributed to Björk’s Utopia and Vulnicura albums.