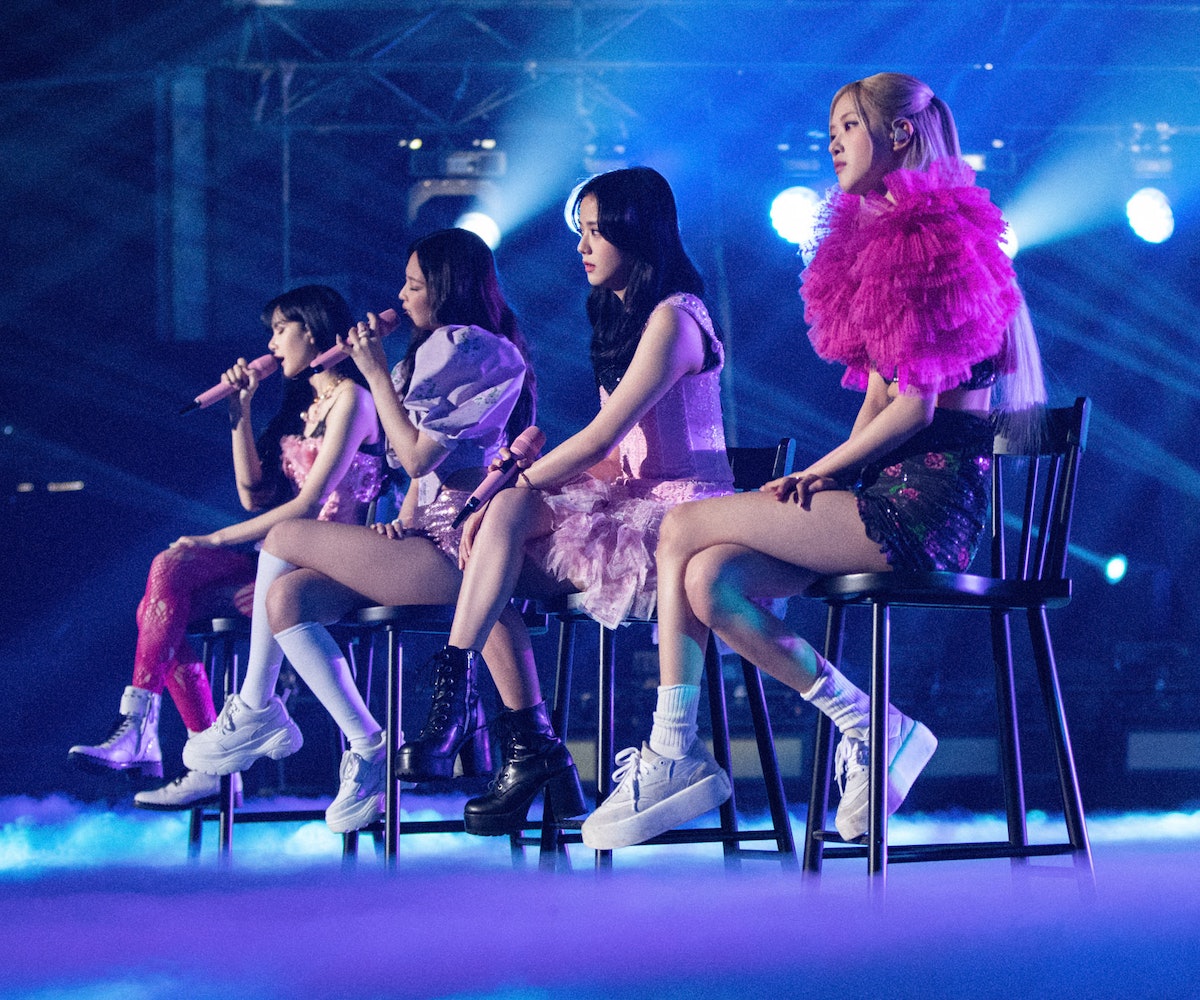 BLACKPINK made their triumphant return on stage on Sunday with The Show, a virtual concert livestreamed from Seoul that produced the kind of spectacle the global K-pop superstars have become known for: an enticing mix of opulence and swagger, where spiky meets sparkly in an effortless display of confidence. And they made it all look as easy as click-clack, badda bing badda boom.

Much like their debut LP, The Album, The Show was conceptually vague and amorphous, allowing Jisoo, Jennie, Rosé, and Lisa to express themselves as distinct parts of a greater whole, and as individual artists. They built a diverse playground where dancer and rapper Lisa could perform a slinky, showgirl cover of Doja Cat's "Say So" and then lay down a smooth verse on a stripped-down version of "Love to Hate Me." It even gave way to pure pop transcendence when Rosé premiered "Gone," her highly-anticipated first solo track, on which the honey-voiced singer grapples with music's greatest muse: heartbreak.

Over 90 minutes and 19 songs, the "Lovesick Girls'' traversed a dizzying number of their anthemic hits and career bangers, from the boisterous opener "Kill This Love" to the bold and boastful "How You Like That" to their crown jewel "Ddu-Du Ddu-Du," a staggering stage number that made rain both shirtless men and hellfire. But among the abundant eye candy (and "Sour Candy"), there were also awkward giggles, shy speeches, and heartfelt moments of appreciation — for one another, for their band, and for their Blinks — that ultimately grounded The Show in a clearly defined feeling of celebration.

Below, we rounded up some of the concert's most unforgettable highlights.

When Lady Gaga and BLACKPINK dropped their deep house Chromatica collab "Sour Candy" last spring, the world just wasn't ready to appreciate this sonic masterpiece in full. It deserved more shine, or at least a music video! Thankfully, the Pinks gifted fans with the very first live performance of "Sour Candy," complete with actual choreography, pink 'fits, attractive men, and some lite voguing. (We need a dance practice video ASAP.) While Gaga herself didn't make an appearance — there was some kind of CGI model projected on an LED screen above them for aesthetics — we know Mother would’ve approved.

If there's one thing we learned from BLACKPINK's In Your Area tour, it's that Jisoo loves a moody pop song with an enormous hook. (She performed Zedd's "Clarity" on tour in 2019.) But what made her version of Tove Lo's "Habits (Stay High)" such a highlight was what she added to it. Jisoo rewrote the verses in Korean, putting a more melancholic spin on the 2014 track about drowning your relationship sorrows in ugly vices. Jisoo imbues the song with a dark melody and an overwhelming sense of loneliness, like an open wound that can't be treated with midnight munchies and casual voyeurism. Instead, she lets it fester.

Everyone knows that BLACKPINK's youngest member is a captivating performer. Lisa can hit you with a few sassy bars, and then command the dance floor completely unbothered. Yet, instead of serving up another mesmerizing dance break ("Swalla," we will never forget you), she embraced her inner showgirl to deliver a groovy performance of Doja Cat's hit single "Say So." The dazzling showstopper solidified the Thai artist as a fierce multi-hyphenate. Singer, rapper, dancer, lyricist — there's nothing Lalisa can't do, especially when it comes to mastering sultry floor choreography on a glowing, rainbow dance floor. No wonder her group mates have playfully christened her "Liyoncé."

It's been a minute since Jennie has gotten to flex as a rapper. It turns out she was just waiting for The Show to unleash a blistering new verse on us. "Been gone and came back, coming for the payback/ Asked them how you like it and it’s looking like they hate that," she rapped during her supercharged solo performance of, well, "Solo." She revamped her breakout 2018 single with new, self-penned lyrics and a remixed dance break. The result? A powerful stage dripping in Jennie's cool confidence.

Blinks have been waiting years for Rosé to make her solo debut. But the timing had to be right for Rosie, who admitted in the group's 2020 Netflix documentary that she struggled to share her own music because of how vulnerable it made her feel. Now, the singer-songwriter is finally ready to share that part of herself with a forthcoming solo record. Rosé previewed her new material with a tender acoustic performance of "Gone," a doleful B-side from the anticipated project. "I just want to be the one/ But to you we're already done," she crooned with her eyes closed. Hell hath no fury like a girl with a broken heart and a golden voice.

Just because The Show was a virtual event doesn't mean that the scale of its production was compromised. Frequent outfit changes, an army of dancers and pyrotechnics, and a live band made the atmosphere feel big and electric. For "Ddu-Du Ddu-Du," the girls wielded all elements, dancing on water while being surrounded by flames. Joining them in the fiery maelstrom was a troupe of shirtless men, who at one point lifted Rosé into the air like a precious deity as she sang her verse. Dangerous? Perhaps. Epic? Most definitely.

"As If It's Your Last" Gets a Rock Makeover

"As If It's Your Last" just hits different with a guitar solo. As The Show neared its end, it careened through a blistering soundscape of crunchy guitars and clattering percussion. The Pinks matched this frenetic energy beat for beat, throwing finger hearts and playful smiles to the camera and to one another without missing a step of choreography. BLACKPINK thrives under such carefree, wild conditions. When guitarist Jus Lyons started shredding, Rosé shouted "fighting!" in encouragement. The cheerful display helped turn a beloved B-side into something more akin to a spiritual experience.

The Show wouldn't have soared to such heights without The Band Six, BLACKPINK's trusted backing band for live concerts. Donning matching black masks throughout the set — the only sign of lingering COVID-19 restrictions on stage — the five musicians (keys, guitar, bass, drums, and an audio engineer) reworked the group's signature blend of pop, hip-hop, and EDM with live instrumentation. It made songs like "Whistle," with its lurching beat and sparse verses, and the chaotic "Boombayah'' find their rhythmic focus, while the slower tempo tracks like "Love to Hate Me" and "You Never Know" hit even harder emotionally. A concert, in-person or virtual, is a creative collaboration, and the synergy between BLACKPINK and The Band Six was the ultimate key to The Show's magic.