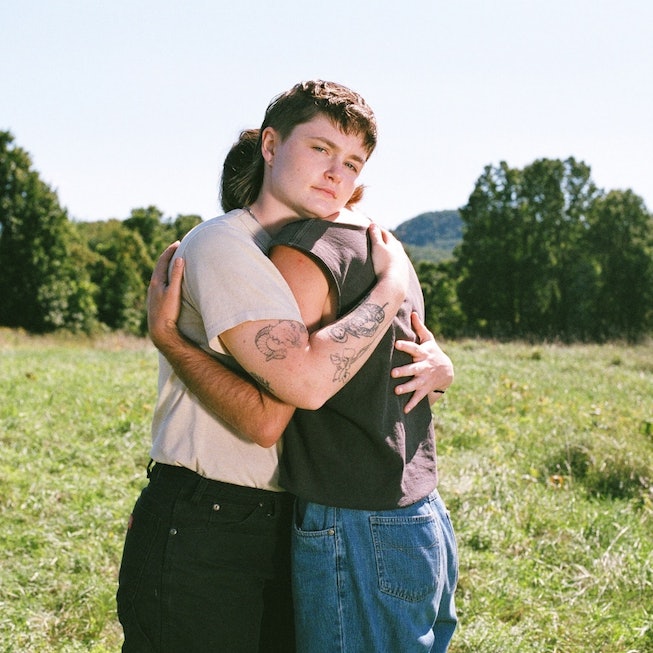 When I’m really going through it, my emotions start to boomerang. I start to see moments like the drinks I had with my friends the previous night not as something I currently have, but as something I’ve already lost. The funny thing is that that gives me a perverse sense of gratitude for every seemingly inconsequential moment — for my coffee in the morning, for my walk past the dog park, even for the minutes I spend toiling on my phone waiting for the train.

I get a similar feeling when I watch the music video for Bloomsday’s “ISO,” in which singer Iris James Garrison oscillates between moments of solitary self-care, familial nostalgia and tiny romantic joys in a music video that captures the emotional whiplash change can inflict on a life.

Bloomsday is a Brooklyn-based indie pop duo composed of Iris James Garrison and Alex Harwood. With a self-described “brotherly dynamic,” they formed in 2019 and wrote their forthcoming debut LP, Place To Land, throughout Garrison’s gender transition. Change is nothing if not constant and difficult even if it’s ultimately right and freeing, and it’s this range of feeling the LP captures. They finished the record the day of Garrison’s top surgery — bookending a period of massive change, but ultimately a journey towards one’s truer self.

“It’s an endless feeling, being in search of self, or another person, or meaning,” Garrison says of “ISO,” a song that combines wistful acoustic guitar with vocals that are at once and longing and hopeful. “I became very acquainted with my body and the inner parts of my experience. I had to learn to like myself, and what came with being in transition.”

For such a personal experience as a gender transition, the video, directed by Gabi Rudin, who’s also done stunning work for the artist Sedona, is universal from its first frame. The video opens with grainy home videos of Garrison as a child with timestamps denoting the year 1997. We see them in quintessential moments of coming-of-age joy: riding a carousel and eating cake at a birthday party.

Those shots are spliced with voyeuristic moments of Garrison in solace as we watch them prepare toast, splash water on their face, water their plants, or slice an apple. But it’s not just Garrison’s childhood and present we see, but their less-distant past as well. They sing with a sense of melancholy, “Looking paler than your last year, stare in the mirror too long/ Wish a body would just disappear/ Oh, where did all the time go?” In the end, Garrison is alone, crawling under their covers and turning out the light. Ultimately, they are alone, but okay. Even if their brain turns over the past, they are safe.

Place To Land is out June 10 on Bayonet Records. Watch the music video for “ISO” below.

NEXT UP
Culture
Kareem Rahma Survives A Dinner Party From Hell In “Really Rich Parents” Video
Entertainment
Ebony Riley's "Deuce Deuce" & 9 Other New Songs Out This Week
Entertainment
Beyoncé Is Now The Most Awarded Artist In Grammy History
Entertainment
Harry Styles' "As It Was" Grammy Performance Featured A Silver Tinsel Onesie
Style + Culture, delivered straight to your inbox.