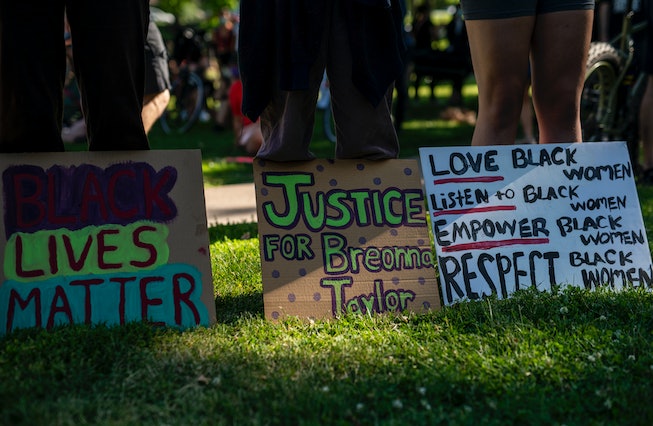 When news of Breonna Taylor's death at the hands of police during a "no-knock" warrant search began circulating nationwide, our goal was clear: we had to say her name. We had to post about it on social media, shout it at protests against police brutality. Keeping her name alive was, and still is, imperative in the quest for justice. But somewhere along the line, the purpose of saying Taylor's name got blurred. Suddenly, it was warped into a pseudo-joke; quirky tweets demanding justice became an easy way to go viral; captioning a selfie with a quip about Taylor's murder is somehow a common occurrence.

Let's get one thing straight: Taylor's death is not a way to workshop a joke, get validation, or wash your hands of any feelings of guilt. Some Twitter users have thankfully had enough. "Breonna Taylor’s murder is not a joke. It’s not a meme," wrote @itsny01_ on June 24. "It’s not meant for your get clear skin tweet to go viral. She was a real Black woman who was murdered in her own home. Jonathan Mattingly, Brett Hankison and Myles Cosgrove are the cops who murdered her not just some cops."

Another Twitter user @eyilanke got to the core of Taylor's upsetting new online legacy. "A Black woman's murder is the only one we turned into a meme," she wrote on June 29. "I'm never gonna forget that."

The next time you get the urge to use Taylor's name for your own benefit, don't. Demand justice for Taylor and her family in productive ways. Her name and life aren't for consumption.

NEXT UP
Life
Rachael Finley Never Got A Guide To Life, So She Wrote Her Own
Entertainment
'Outer Banks' Star Madelyn Cline Takes NYLON To JBL Fest
Entertainment
Soccer Mommy, Wet Leg, & 48 More Artists Made An Album For Abortion Rights
Entertainment
Florence Pugh Is A Gothic Nurse In Eerie 'The Wonder' Trailer