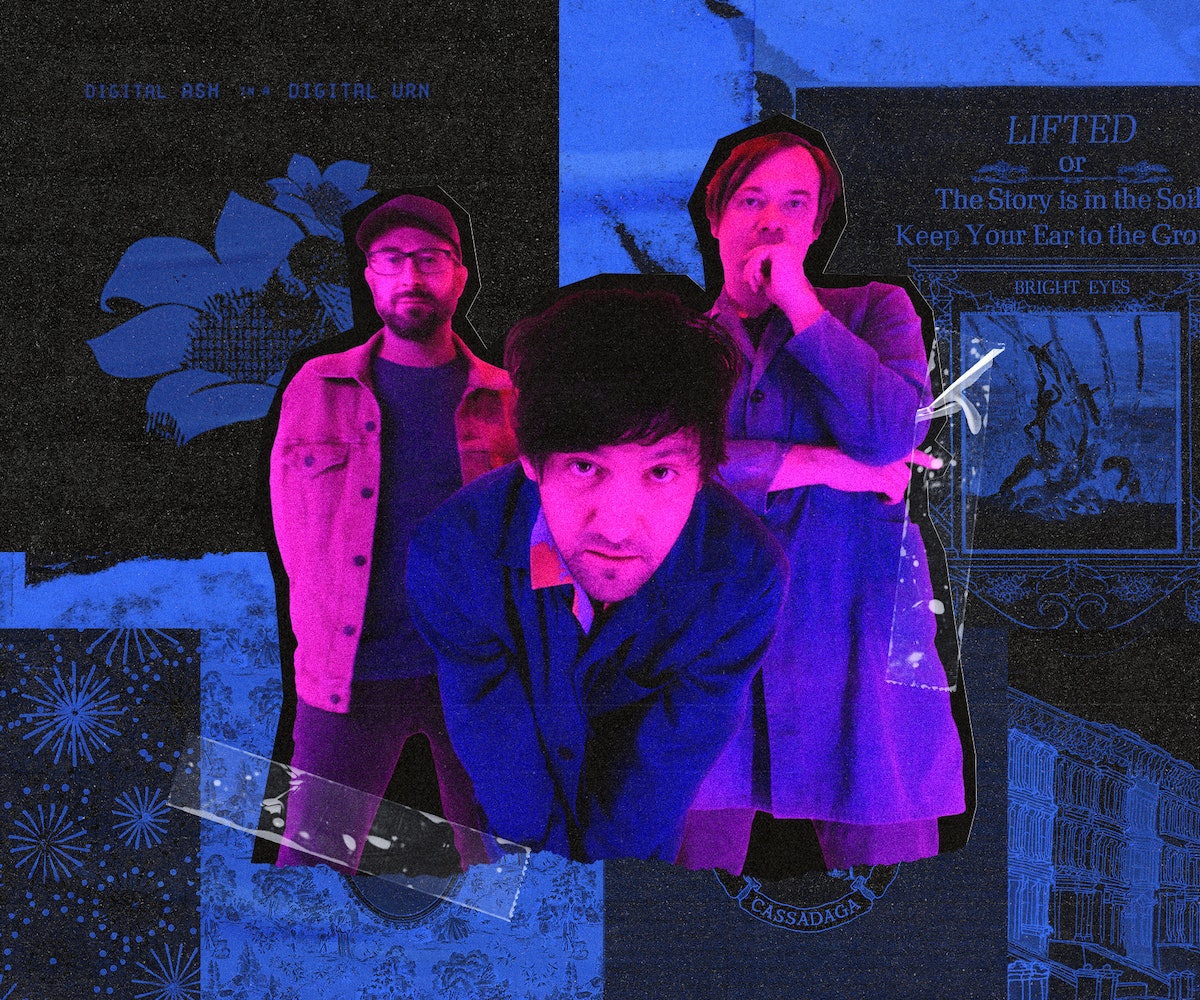 Conor Oberst is already on the line a minute before our phone interview is set to begin. He’s in Milwaukee for Bright Eyes’ second show of their spring U.S. tour. It’s a rainy and dreary day, but he’s excited to play at the night’s venue, the Riverside Theater, which he notes “is actually riverside.” Oberst has played a lot of venues, and even more shows — a few minutes later, he’ll admit he’s not even exactly sure which cities this tour has him stopping in. He’s also done a lot of interviews, evident when bandmate Nate Walcott walks into the room moments later and he immediately goes into intro mode: “Nate, this is Lauren, from NYLON,” he says, pausing mid-thought to allow for pleasantries.

Since forming in Omaha, Nebraska, sometime around 1995, Oberst, Walcott, and Mike Mogis have toured the world as Bright Eyes and, per Wikipedia, released 10 studio albums, one compilation album, one live album, two box sets, five extended plays (with three on the way), 12 split albums and EPs, 26 singles, and 11 music videos. But they still know how to make the past feel new: Earlier this year, the band announced a new catalog Companion series, an extensive re-recording project for 2022 that will see them reissue all nine of their studio albums under their new label, Secretly Group.

Each album will come with a brand new EP consisting of five new recordings of songs from the original release, reimagined — plus a cover song from an artist that influenced the original recording. For the band, the project is a chance to do something special for the reissues — and also get something of a redo. “In playing concerts over the years, I’ve felt that some of songs hold up really well and I still like them, but I cringe when listening to the recordings, mostly because of the sound of my voice at the time, or some weird production choices that we made that we thought were cool ... and now I’m like, ‘Why did we do that?’” Oberst recalls. “I guess it’s a second chance. I believe in second chances.”

The project officially kicks off in May, with the release of A Collection of Songs Written and Recorded 1995-1997: A Companion, Letting Off the Happiness: A Companion and Fevers and Mirrors: A Companion coming on May 27 via Dead Oceans, but the band has been teasing the project for the better half of the year, releasing a track off each of the three (“Falling Out of Love at This Volume,” “Contrast and Compare [ft. Waxahatchee],” and “Haligh, Haligh, A Lie, Haligh [ft. Phoebe Bridgers],” respectively) in February. The methodology for selecting which songs to rerecord, Oberst says, was less strategic. “I just looked at the ones that I felt like I could still sing with a straight face and that felt right,” he explains. But there’s intent behind each of the new versions; take, for example, “Falling Out of Love at This Volume,” once a verb-heavy, distorted lo-fi track, now a full-on head-banging rock jam. “That was one of the few songs a staple in our sets over the years, so this [recording’s] a fun way to kind of document and enhance what had become a live version of that song,” Walcott says.

From the beginning, Bright Eyes albums have been collaborative efforts between friends, with pals from the Omaha music scene and beyond often showing up across multiple records, and that spirit is very much alive in the Companion project. Lavender Diamond’s Becky Stark (also Walcott’s wife) appears on the upcoming “June on the West Coast,” as Oberst’s old Monsters of Folk bandmate M. Ward pops up on “Kathy With a K’s Song” — a duet they’d performed on tour for that band years ago. On “Contrast and Compare,” Waxahatchee’s Katie Crutchfield takes over female vocals from Neely Jenkins, who sang on the original, and will later feature on “The City Has Sex,” while Phoebe Bridgers provides background vocals on a number of tracks across both Letting Off the Happiness and Fevers and Mirrors.

“I love Katie’s voice, and so [‘Contrast and Compare’] kind of occurred to me right away, but then I thought it would be fun to do another with her,” Oberst says. “And Phoebe’s just around and helpful and honest. She mostly just did harmonies for certain parts and she came in and knocked out a bunch of them, because she’s got such a great voice and is a willing participant, happy to do it… Basically, we just got people that we wouldn’t have to pay.”

Bridgers appears on the first cover the band has released as part of the project: a reimagining of Elliott Smith’s “St. Ides Heaven,” off the late singer’s 1995 self-titled album. The word “reimagining” here is important to Oberst. “When you cover a song, I think that you should take a lot of liberty, because who wants to hear a worse version of a song performed in the same way, you know?” he says. “My approach to covering songs has always been to make them a lot different than the original so it’s not just a lesser version of a song people already love.”

The song selection is a reflection of what the band was listening to at the time of Letting Off the Happiness’ recording in 1998. Oberst was 15 when “St. Ides Heaven” was released; like with most songs that first affect you when you’re a teenager, Oberst, now 42, still correlates those original emotions of listening for the first time with how he feels today. “Elliott’s songs have been such a part of my life,” he says. “I can’t say I feel a lot different about [the song]; the general feeling of it is still the same to me. I don’t know, maybe I just never grew up. When you listen to his songs when you’re a teenager, and if you have a penchant for drug use, you can kind of relate to it. I guess I’m still teenager at heart. Not a lot has changed.”

It’s a challenge, then, that so many Bright Eyes songs have that exact emotional grasp on listeners — particularly when you consider “First Day of My Life,” the band’s biggest mainstream hit and the indie love song. Oberst admits that one of the few debates the band had during the project was whether to include that particular track or not. In the end, they did. “We did think, ‘Wow, there’s going to be some sh*thead on the internet that’s going to be pissed about it,’ because it doesn’t sound anything like the original one that they like,” he says. “But it’s like, ‘Yo, you already have the original one.’” And a heads up to the sh*theads: This “First Day” isn’t going to sound like the original. That’s the point. “This is blowing a surprise of sorts, but we basically did all the Wide Awake songs in kind of a Digital Ash style, and we did all the Digital Ash songs in like a Wide Awake style,” he says, referring to the band’s 2005 same-day release of one folk-leaning album (Wide Awake) and a more electronic-focused one (Digital Ash).

As of now, the band has completed six of the remasters, with the three most recent albums to go. As part of their recent label signing, they are also due to release a brand new album, their 11th, sometime in the next three years. Oberst says they’ll start thinking about that after the current tour, which has them traveling the world through September and will culminate with a slot at Las Vegas’ When We We Young Festival — or as the internet has taken to calling it, “Emo Coachella.” (“I think we’re going to be definitely, like, the oddball there, but maybe not,” Oberst says of the pop-punk heavy lineup. “I looked at it, and there was so many bands I didn’t know at all. I have no idea who they are. But I like Paramore, I like My Chem, I think they’re cool. It’s going to be fun… Hey man, I tried to do [pop-punk] with my other band, Desaparecidos, and like, no one cared. It didn’t catch fire.”)

The tour, something of a continuation of last summer’s leg, a postponed support of their 2020 album, Down in the Weeds, Where the World Once Was, is already feeling tighter and more familiar to the band, even just one night in. “It’s a continuation in the sense that it’s a similar setup,” Oberst says. “Last summer, we were hiring strings and horns in every town, but this time we’re just traveling with all the same people and I think it’ll just get better and better the more shows we play.” The setlist includes almost every track from the latest album, but spans nearly every Bright Eyes era, from 1999’s lesser known “Neely O’Hara” to fan favorite “Lover I Don’t Have to Love.” “It’s a mixture of playing all the staples that have been a part of this band for years and years, but also keeping it interesting and throwing in some curveballs,” Oberst says. “It’s a process of trial and error, too. We tried to do ‘Lime Tree,’ which is one of my favorite arrangements, but it just felt kind of slow and I wasn’t sure if I was singing it right.”

“Maybe that’s a song you should sit in a dark room and listen to by yourself,” he continues. “So some of them don’t make it through the rehearsal process. But, you’re right, we have like a trillion songs, so we can always find something to play.”

NEXT UP
Entertainment
Soundcheck: The 10 Best Music Releases The Week Of May 9, 2022
Entertainment
Harry Styles' Music Video Evolution From "Sign Of The Times" To "As It Was"
Entertainment
Taking Back Sunday’s John Nolan On Twenty Years Of “Tell All Your Friends”
Entertainment
How Conversations With Friends Chose Mitski, James Blake & More For Its Soundtrack