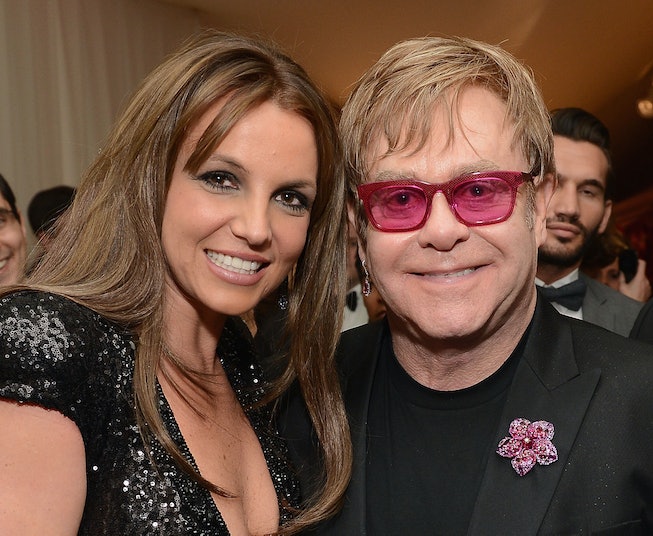 Britney Spears has returned with her first new recorded music since 2016’s Glory, with “Hold Me Closer,” a duet with Elton John. The track is a take on John’s 1971 classic song, “Tiny Dancer.” John shared that the rumored song was out with an Instagram post showing a sweet image of Spears and himself as children.

In a recent interview with The Guardian, John spoke about the collaboration, saying, “It’s hard when you’re young. Britney was broken. I was broken when I got sober.”

“I was in a terrible place. I’ve been through that broken feeling and it’s horrible,” he continued. “And luckily enough, I’ve been sober for 32 years and it’s the happiest I’ve ever been. Now I’ve got the experience to be able to advise people and help them because I don’t want to see any artists in a dark place. A lot of artists, you’d think they’d have a lot of self-esteem but they don’t, and that’s why we go onstage and we get the applause, and then we come offstage and we’re back to square one.”

He added that he thinks “Hold Me Closer” and its release will give Spears “so much more confidence than she’s got already and she will realize that people actually love her and care for her and want her to be happy.”

He added: That’s all anybody in their right mind would want after she went through such a traumatic time.”

Spears posted an Instagram about the song, before deleting her account, that said: “You can bet your bottom dollar that THIS collaboration will heighten my year by joining your brilliant hands of play. Thank you for your generosity and just thinking of me to join you on such a brilliant song! How cool is it to be a background voice ON YOUR song! Sir Elton I did it thanks to your genius, creative, and legendary mind!”

Listen to “Hold Me Closer,” below: