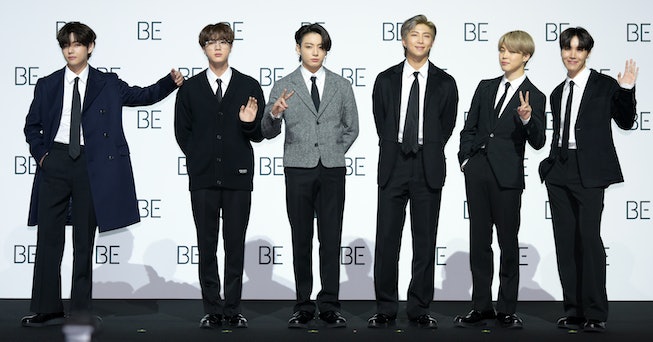 It’s been a long run, but BTS is officially taking a break. The mega-famous K-pop group just announced that they’re going on a “temporary hiatus” to explore their individual solo careers.

The news broke during BTS’s FESPA dinner, which celebrated the band's origin. The seven-person group — which includes Jungkook, V, Jimin, SUGA, Jin, RM, and J-hope — formed in 2010 and has dominated the charts ever since. Over the past 12 years, they’ve released numerous hit songs, like “Dynamite,” “Mic Drop,” “Boy With Luv,” and the Grammy-nominated track, “Butter.”

In a video from the event, the band members expressed a need to separate and explore their own identities. “I always thought that BTS was different from other groups,” RM said. “But the problem with K-pop and the whole ‘idol’ system is that they don't give you time to mature. You have to keep producing music and doing something.”

While on their hiatus, BTS plans to work on honing their individual voices. “In the past, I could still balance working on music alone and doing our group promotions but now I can't do them together,” RM continued. “It’s impossible, it just won’t work. I can’t be doing group stuff and then suddenly turning the focus to my own work like flipping a switch. I realized I need time on my own.”

J-Hope further explained that he believes the hiatus will make BTS more successful in the future. “We should spend some time apart to learn how to be one again,” he said. “I hope you don’t see this as a negative thing, and see it as a healthy plan. BTS will become stronger that way.”

During their announcement, Jimin referenced their loyal fandom, known as the “ARMY.” “We can’t help but think of our fans no matter what,” he said. “I think now, finally, we’ve come to think about what kind of artists we want to be remembered by our fans. I think that’s why we're going through a rough patch right now. We’re trying to find our identity and that’s an exhausting and long process.

Though people are understandably disappointed about their decision BTS clarified the hiatus is not permanent. “It’s not like we’re disbanding,” SUGA added.

Watch their full video below: