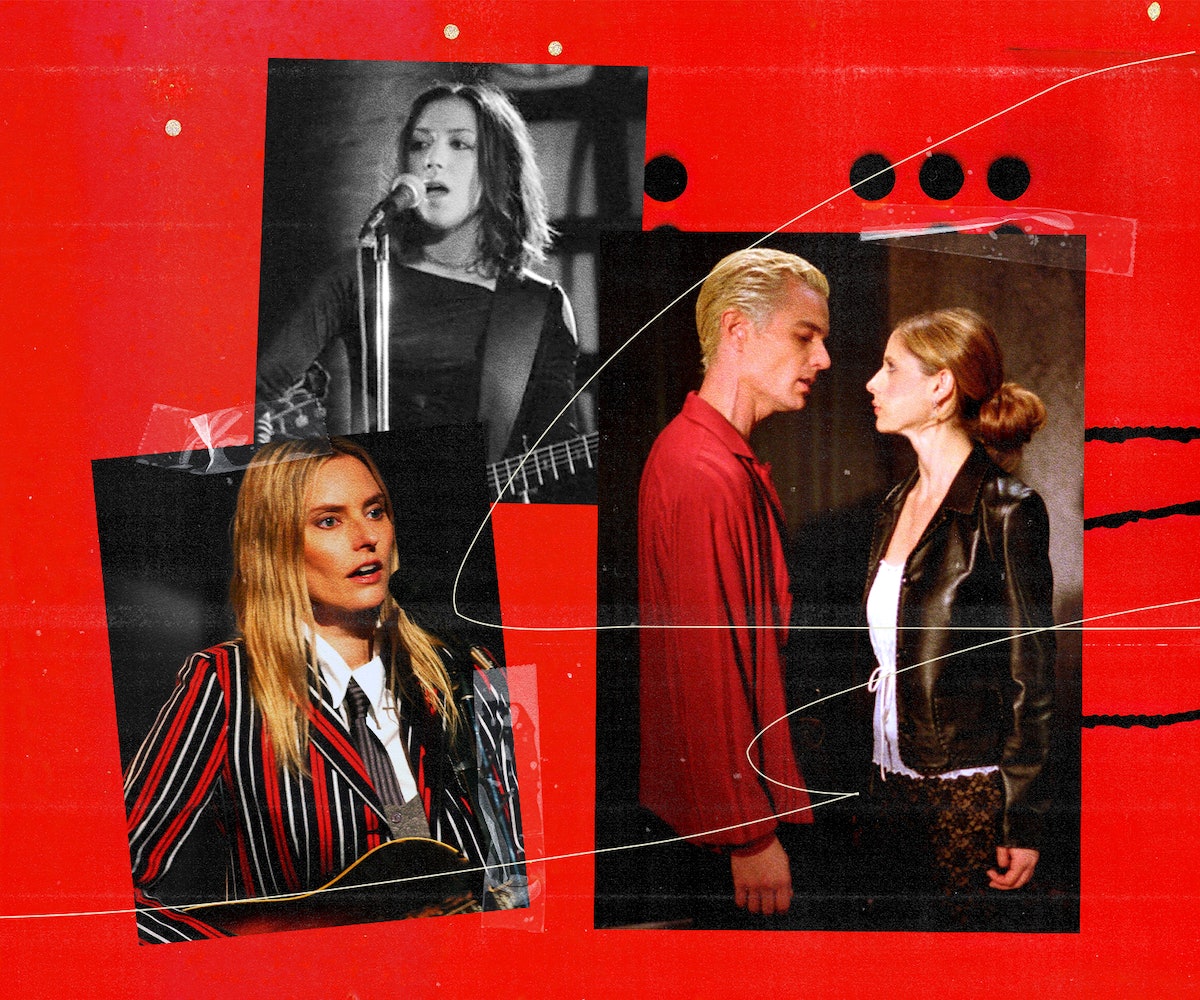 Buffy The Vampire Slayer wouldn’t have been the same without its music. From the show’s brilliant use of musical cues, and the many guest bands that graced Sunnydale’s beloved local venue The Bronze, to the series’ legendary musical episode “Once More, With Feeling” — the Joss Whedon-helmed show relied heavily on the music to usher along important plot narratives and character development, a quality that remains heavily cherished by fans to this day. In fact, the show’s most intense moments can often be traced back to its soundtrack.

Over the course of its seven seasons, the beloved TV show, which aired from 1997-2003 and has recently experienced a surge of popularity among Gen Z, also became a springboard of major exposure for indie bands across the country, bringing about some truly iconic song and narrative plot pairings. Remember Michelle Branch’s emotional performance of “Goodbye To You,” in Season 6 of the series during a turbulent moment for several of the characters Whedon’s Buffy was also one of the first shows to introduce the concept of a musical-themed episode with “Once More, With Feeling” which was once regularly shown in theaters for audience members to singalong to before a financial dispute ended that in 2007.

Nevertheless, there’s a wealth of music to be scoured throughout Buffy’s 144 episodes and, with great difficulty below, NYLON selected the 12 greatest musical moments from the entire series from Branch’s appearance to the series’ unforgettable theme song.

Buffy Performing “Something To Sing About” In Musical Episode “Once More, With Feeling”

Buffy The Vampire Slayer’s cult musical episode is legendary. Not only was it a major change in form for the show, Joss Whedon wrote all of the songs and the cast members performed their own vocals. From a plot standpoint, it was also a pivotal episode with many of the characters’ relationships changing and secrets getting revealed. Buffy, for one, tells her friends that she was in heaven before her friends resurrected her and ruined her life in “Something To Sing About,” an important, plot-moving number in the stacked episode.

A majorly memorable music cue from Buffy’s Season 2 finale “Becoming Part 2” is Sarah MacLachlan’s “Full Of Grace,” which plays at the pivotal moment of Buffy deciding to leave Sunnydale after sending her boyfriend Angel to Hell and getting expelled from school. It’s an emotional moment and an immediately transportive song for any hardcore Buffy fan.

Michelle Branch performing “Goodbye To You” At The Bronze

The Bronze played host to a lot of small indie bands over the course of Buffy, but also brought some big names to Sunnydale too, including early ‘00s singer-songwriter Michelle Branch. In the season six episode “Tabula Rasa,” Branch croons through a moving version of her song “Goodbye To You” at the end of a turbulent episode for most of the characters: Buffy finds out Giles is leaving, her and Spike’s relationship is on the rocks, Willow and Tara are breaking up. It’s a difficult time, and Branch’s emotive vocals do a lot of emotional heavy lifting in the scene.

Buffy Performing “Going Through The Motions” In “Once More, With Feeling”

This is a pretty iconic opening number for “Once More, With Feeling” as it finds Buffy doing her regular cemetery rounds and beating up demons. It introduces the theme of the episode, and Sarah Michelle Gellar actually has a pretty good musical theater-y voice despite the fact she later revealed she didn’t want to do the episode in the first place.

Spike Performing “Rest In Peace” In “Once More, With Feeling”

Spike’s big number in “Once More, With Feeling” is a punky rock song that offered much-needed contrast to the other theater-y songs of the episode. It’s also a pretty important moment for Spike and Buffy’s relationship: he sings about the difficult nature of their relationship, and asks Buffy to make up her mind about him or to let him “rest in peace.” Unfortunately, it turns out he probably didn’t mean much of it, because after he’s done singing and she’s run off, he asks: “So you’re not staying then?”

One of the more compelling bands that graced The Bronze’s stage was Cibo Matto, the NYC alternative rock group fronted by Yuka Honda and Miho Hatori. In the premiere of the second season, they perform their wispy, sensual song “Sugar Water,” as Buffy and Angel have a steamy moment on the dance floor. It’s one of the sexiest moments of the show, and the song has become a cult favorite among fans for good reason.

Episode 20 of Buffy’s Season 3, “The Prom,” ends on an important milestone in Angel and Buffy’s relationship — and to the gorgeous cover of The Rolling Stones’ “Wild Horses” performed by British band The Sundays. After breaking up with Buffy earlier in the episode out of the realization that he’d never be able to give her a normal life, Angel appears at prom in a surprise, and dances with Buffy. It’s a bittersweet moment for the two, which is only further heightened by the song.

Angie Hart is yet another artist who performs at The Bronze, but the song she sings, “Blue,” in Season 7, Episode 7, “Conversations With Dead People,” is different in that it was co-written by Whedon. It makes sense, as the episode is a key departure from the series’ general light-hearted nature and turns pretty dark. Hart’s clear but chilling vocals on the track are the perfect fit for capturing the uneasy mood.

Aimee Mann was another big name to play The Bronze, and the only musician with a speaking role in the series. She appeared in the eighth episode of the seventh season, “Sleeper,” playing her hit “Pavlov’s Bell” as Spike has an intense fighting scene with a new vampire he sired. He ends up staking her in the middle of the dance floor, distracting from Mann’s performance and resulting her to say she “hates playing vampire towns” later in the episode. It’s a lot of fun and a great rowdy moment in the series.

One of the bigger b-plots of Buffy is the development Anya and Xander’s relationship, and the road to their impending marriage gets rocky in “Once More, With Feeling” as the musical curse that’s taken over the town forces the two to reveal their insecurities about getting married. “I didn’t wanna be saying things but they just kept pouring out,” Xander complains afterwards. Oops! Anyway, Anya does the whole song and dance routine in a great outfit — a very hot red lingerie set — which makes “I’ll Never Tell” another memorable number.

Buffy & Faith Dancing To “Chinese Burn” By Curve At The Bronze

This song/scene — everything — is unforgettable if simply for the incredible white girl dance moves Buffy and Faith pull to “Chinese Burn” by Curve, a moment that’s become a beloved meme in the Buffy fan community.

Finally, we couldn’t forget the most iconic music moment of every episode of Buffy, its theme song performed by the Santa Barbara-based pop-punk band Nerf Herder. The apparently came up with the spiky, upbeat instrumental after the show producers reached out to a few local bands to come up with some song ideas. They hammered out the theme above, and history was made.

More from NYLON’s Buffy Week: We picked the all-time scariest episodes from the show.