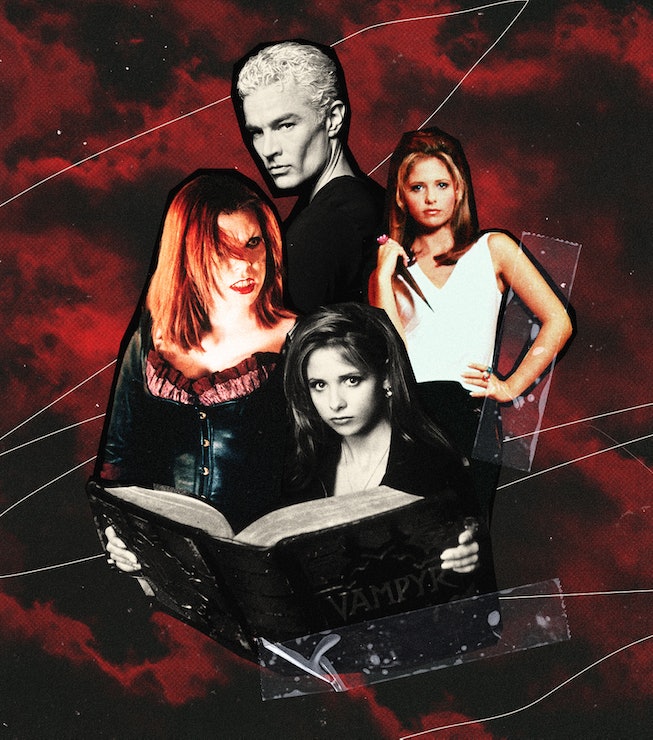 In the late ‘90s and early ‘00s, no TV show was cooler than Buffy the Vampire Slayer. In the years since the show has gone off the air in 2003, the self-aware take on the intersections of teen angst and lustful vampirism has remained a cult favorite with a fan base that spans generations. With its distinctive mix of gothic edginess and playful femininity, Buffy the Vampire Slayer’s outfits and fashion are right up there with snappy dialogue and a charismatic cast on the list of what makes it a modern classic.

The costuming in Buffy the Vampire Slayer helped create distinct personalities for the ensemble cast and was a significant part of the show’s unforgettable character development during its seven-season run. Early in the show, Buffy (Sarah Michelle Gellar), a sassy blonde teen queen, wore a lot of pastels and matching looks with cardigans, baby tees, and mini skirts. Her fashion feels very of the time, like something the popular girl at school would have worn, and one of the show’s many delights comes from the incongruity of that look when paired with badass vampire slayage. As Buffy’s life became more complex — that’ll happen when you fall in love with vampires while being fated to kill them — her wardrobe developed more of an edge, with animal prints and leather making regular appearances.

Leather is a key part of the Buffy the Vampire Slayer aesthetic. While leather pants may seem too form-fitting and stiff to allow for the athletics that killing vampire requires, Buffy makes them look like they were tailor-made for the job. It takes confidence to wear leather pants, and Buffy has the necessary cool. She isn’t the only character who rocks leather, of course. Buffy’s vampire lovers, Angel (David Boreanaz) and Spike (James Marsters), both wear black leather jackets (classic bad boy behavior), and when the alternate slayer Faith (played by Eliza Dushku) enters the show in season three, she’s presented as a darker, grittier version of Buffy, clad in sleeveless tops and leather pants. Faith’s looks, always topped off with burgundy lipstick, stick to a rocker-girl style, while Buffy’s outfits are more flexible and allows for more typically feminine flourishes.

One of the quintessential Buffy looks features her simple white empire-waist prom dress paired with a leather jacket and the ultimate accessory: a crossbow. She is equal parts teen icon and fierce warrior. The simplicity of this look makes it iconic — the jolt of the contrasting jacket, dress (that Gellar still owns today), and weapon give her undeniable power.

The fashions of Buffy and her crew have obvious nostalgic appeal. Buffy’s sweetly nerdy friend Willow (Alyson Hannigan) has a collection of novelty print sweaters and overalls that embody the softer, more twee side of the ‘90s. Some of the flirty silhouettes that Buffy wears, with short hemlines balanced with knee-high boots, translate perfectly to what’s been recently trending on social media feeds.

But it isn’t just nostalgia that makes the show’s style so special — Buffy’s fashion always plays on her strength. She can dress sweetly or toughly, or sport an outfit that channels both sweet and tough at the same time. No matter what she wears, she gets the slayer job done. A stake through the heart seems all the more potent when the girl wielding it dresses so well. Buffy doesn’t just slay, she makes a fashion statement while doing it, and her girly yet imposing style will always be a source of inspiration.