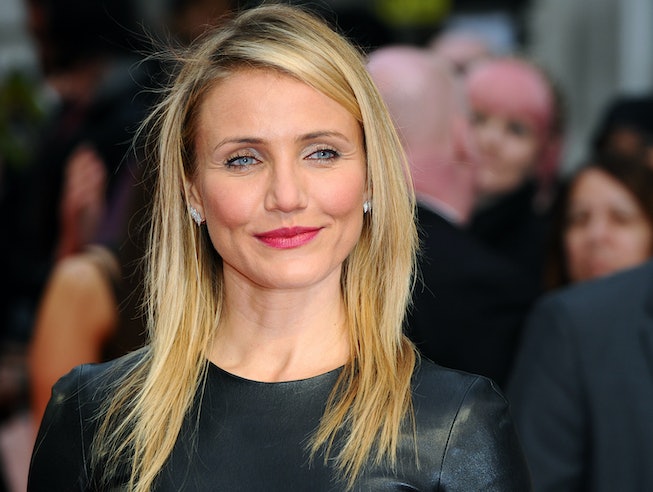 Early aughts icon Cameron Diaz is back. The 49-year-old actress is returning to screens to star in a new Netflix film alongside Jamie Foxx. Her upcoming project, Back In Action, is an action-comedy and, notably, Diaz’s first time working on a feature film since 2014.

Foxx revealed the news on Instagram, where he posted an audio clip of himself, Diaz, and NFL quarterback Tom Brady talking about a potential collaboration. Diaz can be heard saying, “Thanks for calling,” before admitting that she feels “anxious.” “I’m like pacing the room,” she continues. “I feel excited, but I don’t know how to do this you know.” Foxx then surprises Diaz and adds Brady to the call. “I was talking to Jamie, and he said you needed a few tips on how to un-retire,” Brady says. “And I am relatively successful at un-retiring.”

Not much is known about the project, as plot details are still under wraps. What we do know is that Seth Gordon, the mind behind Warner Brothers' 2011 comedy, Horrible Bosses, is teaming up with Neighbors writer Brendan O’Brien to make the film. Gordon is expected to direct the upcoming flick from a script that O’Brien wrote.

Fans are already flocking to the comments under Foxx’s post to share their excitement about Diaz’s acting revival. She last appeared in the 2014 remake of Annie, in which Foxx was also featured. Prior to that, Diaz was a movie icon, starring in films like Charlie’s Angels, There’s Something About Mary, My Best Friend’s Wedding, My Sister’s Keeper and voicing Fiona in Shrek.

In an interview with Goop in 2020, Diaz explained that she stepped away from acting to take care of herself. “There’s a lot of energy coming at you at all times when you’re really visible as an actor and doing press and putting yourself out there,” she said. “I’m sensitive to some energies and not others, but I do get the overwhelming energy of the attention being put towards me. I stopped, I really looked at my life and I saw what I had been [missing].”

Since then she’s become a mother, launched the clean wine brand Avaline, and married singer Benji Madden. We’ll all have to stay tuned to see what Back In Action is about, but if the project could bring Diaz out of an eight year retirement, it must be worth the wait.