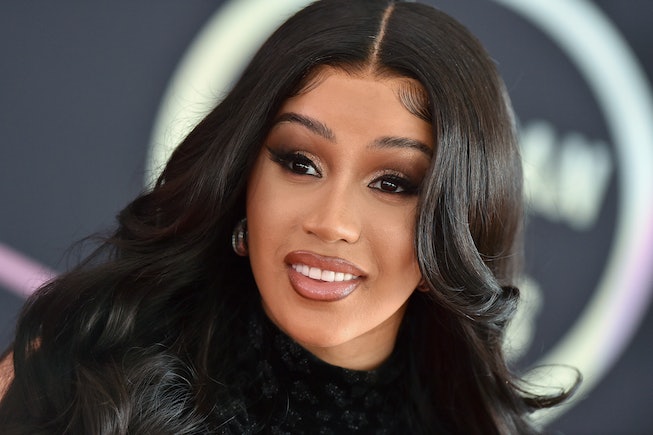 Cardi B has officially announced that she has not one, but two, new projects in the works. Three years after dropping her Grammy-winning debut album Invasion Of Privacy, the rapper is preparing to release her second album in 2022. The newly minted creative director in residence of Playboy is diving back into acting as well, announcing that she’ll also star in her first feature film next year.

On Monday, December 15th, Cardi appeared on Instagram Live to update fans on her home life with her two kids and her career. While wearing a cozy beanie, pink tank top, red sunglasses, and her signature hoops, the rapper spoke frankly about the realities of being a new mother. At the time she was battling a cold — which she presumed was a longstanding side-effect of her latest pregnancy — and asked fans for remedies. “I swear to God I’m not trying to gas it, I have not been the f***ing same ever since I gave motherf***ing birth,” she said.

Cardi then explained how social media has a tendency to warp our perception of celebrities, who live full, and oftentimes stressful, lives outside of the public eye. “Everything be looking so glamorous,” she said. “You see my f***ing Instagram and everything, but it’s been really...it’s been a lot. The rapper then discussed the difficulties of being a working mother. “Trying to balance out my new mother f***ing life, like I got two kids, my daughters are going to school now, and I have lots of jobs now,” she said.

“I’m in a lot of positions that require a lot of my time, and on top of that, I gotta put out this album next year,” she continued. “Not only do I got to put out an album, but I gotta record a movie. I’ve got to do so much sh*t, ya’ll.”

Though details of Cardi’s upcoming movie and album are mostly under wraps, it appears both projects are currently in motion. The movie she’s referring to is like Assisted Living, a Paramount comedy announced back in January that’s rumored to be a mix of Mrs. Doubtfire and Sister Act. Per the synopsis provided by Deadline it follows Amber (Cardi), “a small-time crook who finds herself in over her head when a heist goes wrong. On the run from both her cops and the former crew, she struggles to find anyone to take her in. Running out of options, Amber disguises herself as an elderly woman and hides out in one place that no one will look — her estranged grandmother's nursing home.”

The project is being directed by Thembi Banks, and marks Cardi’s return to the big screen following her 2019 acting-debut in Hustlers, with Jennifer Lopez.